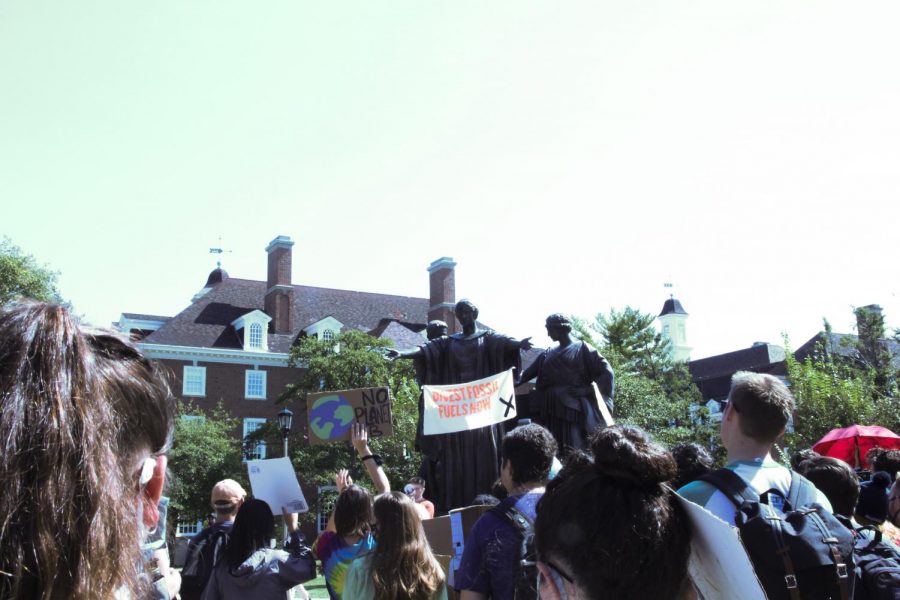 A group of climate strike protestors band together in front of Alma Mater on Friday. Students demanded that the University cut ties with fossil fuel companies.

Students chanting “We will not rest until we divest” and holding cardboard signs scrawled with black paint saying “Planet over profit” marched around the Main Quad as a part of the climate strike last Friday.

The climate strike was organized by Students for Environmental Concerns, or SECS, and organizers said they want to see the University take stronger climate action.

Organizers made a list of demands for the University including cutting ties with companies that produce fossil fuels and following through with the Illinois Climate Action Plan’s goal to be carbon neutral by 2050.

Katrina Kujawa, junior in ACES who attended the strike, said she was protesting because she doesn’t want her tuition money to contribute to climate change just by attending the University.

“Still 1% of our schools’ portfolio still goes to fossil fuels and I don’t believe we should be doing that,” Kujawa said. “That’s our tuition money and I don’t want that to go there.”

University of Illinois Chancellor Robert Jones has said the University plans to stop investing in fossil fuel companies by 2025.

“As an institution that prides itself on being ‘a model of sustainability, energy efficiency and environmental friendliness for the world to see,’ it is imperative that the University’s values and commitment to combating climate change are reflected in all of our investments,” the iCAP 2020 states.

Niko Johnson-Fuller, sophomore in LAS and a co-chair of Young Democratic Socialists of America, said that the University needs to do more to change the way fossil fuels are used to power the campus.

YDSA members said they stand in solidarity with SECS about the University’s divestment from fossil fuels.

Johnson-Fuller said he believes the University should divest their investments in companies that produce fossil fuels because the planet is being destroyed by climate change.

Dat Hoang Luu, another co-chair of the YDSA, said the University is hypocritical for being a largely STEM-oriented school while still investing in companies that are contributing to climate change.

“So many students come here wanting to someway, somehow contribute to the world in some beneficial way,” Hoang Luu said. “But (they) are instead funneled by the University into these industries that are complicit in the destruction of the planet.”

“Just being in solidarity is sometimes enough,” Kujawa said. “Do your part.”