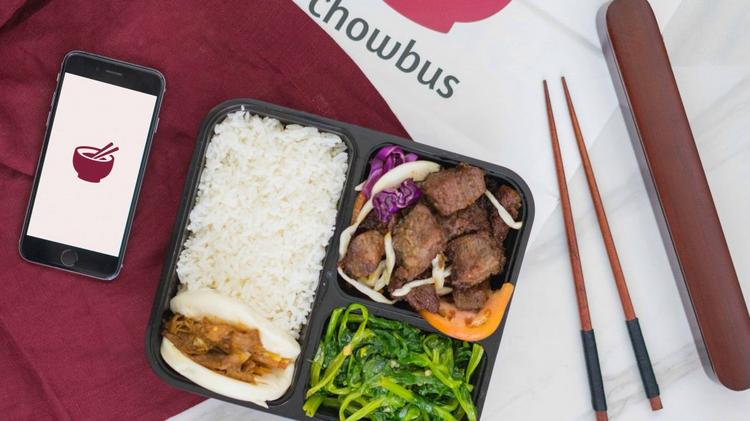 Pictured above is a Chowbus order next to the Chowbus app with the logo on the phone screen.

In the era of efficiency and fast food, students are constantly on the look-out for the quickest way to fill their stomachs with delicious meals. However, amid the midst of ordering quick meals, just how easy is it to access an authentic Asian meal? A relatively new downloadable app on campus, Chowbus, has been the answer.

With over 30+ restaurant options to order from in the CU area, customers have the option to deliver, pick up, or go grocery shopping from various Asian restaurants on campus. Among some of the eateries are Teamoji, Star Korean (BBQ & Sushi), Kung Fu Bbq, Lao Sze Chuan, Asian Taste, Top Food, Pokelab, Mid-Summer Lounge, Paris Super Crepes and Fresh International Market Food Court.

VP Operations of Chowbus and UIUC alum Allan Chow goes on to explain the benefits of Chowbus over its competitors. Unlike other food delivery apps where you have to order from only one location, Chow notes “we allow you to order from multiple different restaurants at once.” For example, a customer can request a Signature Crepe from Paris Crepes, but also an authentic Crispy Basil Chicken meal from Asian Taste at checkout.

Hua Jiang, a sophomore in Engineering, said one of his favorite parts of the app is the variety of Chinese restaurants and clarity of the meals featured on the app. When ordering, he finds that the simplicity and ability to “see the pictures” featuring his meals are extremely efficient. As a student from China, he also enjoys how he can efficiently deliver and enjoy a high-quality meal that reminds him of home through the app.

Another unique benefit of the Chowbus is the care it places onto its customers. When you reach out to customer care on the app, Chowbus immediately transfers the call to people in the Champaign area who are familiar with the restaurants, area and campus, instead of a general number, Chow said. He stated the team’s vision has always been focused on creating positive experiences for its customers and restaurants as well as keeping the focus on how they can provide more services to their restaurants.

As a startup Chow joined the company when it was merely 12 people working. Currently, there are about 105 people on the team in over 14 cities nationwide. The growth mindset that Chowbus maintains towards its company and outreach ultimately assists more people to use the app. While cities such as Chicago have had more users, smaller places such as Champaign are working to achieve the same level of success it has had.

Ethan Su, a recent University graduate in LAS,  has also found one of the perks of the app is how much cheaper it is than other services. For example, the app allows free delivery on orders over $20 as well as 5% off the order when $20 is reached. Chow finds that features for active users, such as Chowbus Plus Membership which allows free unlimited delivery and 10% off specific pickup and exclusive dine-in discounts, allow him to prefer the app over others.

To keep the app dynamic and discounts always available, Chowbus also holds special deals based around Chinese holidays such as the upcoming November 11th “Singles Day.” A Chinese holiday created as an Anti-Valentine’s Day, the holiday celebrates young people who take pride in being single. Young people take this day to shop online and offline and was officially declared as one of the largest shopping days in the world.  During Singles Day, Chowbus will provide exclusive discounts to its users.

While one of the largest sources of its success has been its target audience as Chow has found, one underlying question for the success and future of the app is its expansion. Focused on word-of mouth-based marketing in the past, why is it that so many University students not heard of Chowbus before? Su believes that it will take a longer time to reach American students on campus. Since many American students have not grown up eating the food accessible at Asian restaurants, he believes that many may be unfamiliar with what the stores have to offer.