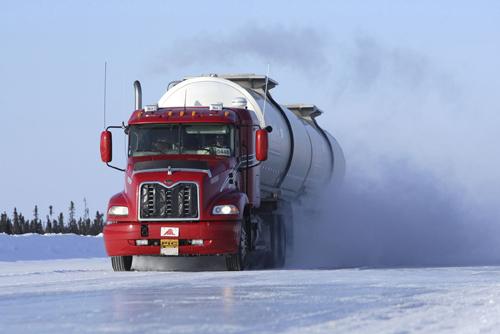 NEW YORK – Few sane people want to visit a storm-tossed Bering Sea, the sizzling Sahara Desert and Canada’s Northwest Territories in January. Experiencing them from a comfortable chair in front of a flat-screen television, however, is all the rage.

Shows about adventure seekers in forbidding lands are among the hottest on cable television. “Deadliest Catch,” about crab fishermen off the Alaska coast, is Discovery’s most popular show, while “Ice Road Truckers” is setting ratings records for The History Channel. Unhinged survivalist Bear Grylls of Discovery’s “Man vs. Wild” is a new pinup star.

They all have the romanticism of the wild frontier in common. Spectacular photography, at a time TV screens are becoming bigger and clearer, enhances the appeal.

Both “Deadliest Catch” and “Ice Road Truckers” were hunches that really paid off. Segments on the fishermen and big-rig drivers who race across frozen lakes were featured briefly on other shows, and executives decided to spin them off into series.

For a couple of weeks of backbreaking work on lurching, ice-slicked ship decks a fishermen can earn a year’s wages. Or he could die. Nine have drowned in the Bering Sea since Discovery began filming the series, although none on boats where the network was filming.

The series is like an old television Western, Root said.

“It’s touched something rather big and mythic in society today,” she said. “The idea of those kind of rewards and danger existing in society is fascinating to people.”

The stars of “Ice Road Truckers” face a different kind of danger. They need to deliver massive loads of equipment to busy diamond mines up north. And the work needs to be done in the dead of winter, where frozen lakes offer the most direct routes.

They can feel the ice crack and groan as they drive their big rigs over the lakes. If calculations about ice thickness are wrong, the trucks would plunge into the water, which would then freeze over faster than any rescue could be attempted. An idle truck that has broken down puts even more pressure on the ice.

“I find real people much more fascinating than the ones you could make up in Hollywood,” said Nancy Dubuc, executive vice president and general manager of The History Channel. “Everyone has someone you either love or love to hate, and that’s what you look for.”

The 3.4 million people who tuned in to June’s series premiere was the biggest bow ever for an original program on The History Channel, according to Nielsen Media Research.

The network decided only in December to make the series, putting the producers in the same sort of race against time faced by the truckers. Producers had to scramble to set things up and get a crew to northern Canada for when the roads opened in January.

A reality series about daredevil truckers might seem a strange fit for The History Channel. Dubuc said it touches upon one of history’s greatest themes – exploration.

To Discovery’s Root, “Ice Road Truckers” feels a little, um, familiar. “Imitation is the sincerest form of flattery,” she said.

DuBuc acknowledges the similarities to “Deadliest Catch.” But you could argue The History Channel tapped into this vein first with the series “Dangerous Missions,” she said.

Discovery’s “Man vs. Wild” hasn’t reached the same heights, but is growing fast in its second season. The star, Grylls, is a former British Special Air Service soldier whose military career ended when he broke his back jumping out of a helicopter. He looked for other ways to put his survival skills to use.

Each episode begins with Grylls parachuting into some desolate area, carrying only a knife and flint. His goal is to find his way to safety in a couple of days.

He offers valuable advice to people who may find themselves lost in the wild, like how to use the sky for directions or construct an ice cave to survive a night in frigid temperatures. He also goes the extra mile with a “Crocodile Hunter”-like enthusiasm. Worried about a lack of water in one episode, he drinks his urine.

When Grylls fortuitously happens upon a sheep’s carcass in Iceland, he cuts off chunks of meat and cleverly boils them in a hot volcanic pool. Fine. Then he gouges out the sheep’s eyeball for some extra energy.

“You bit into it and it was like an explosion of blood and gristle,” he said. “I thought it was going to be a bit like a hard-boiled egg.”

One thing that doesn’t ring true about “Man vs. Wild” is the impression created that Grylls is alone against the world – even though it’s obvious to a viewer a camera crew is in tow. Root said the crew is instructed to interfere only in a life-or-death situation.

Grylls returned from a taping in the Sahara’s searing heat last week to another dangerous land – Beverly Hills, Calif. One suspects he has other skills that would serve him well there; Root said the women at Discovery’s offices all take notice when Grylls visits.

He’d rather be avoiding piranhas in the Amazon.

“It’s the only thing I’ve ever been good at in my life,” he said. “I come alive when I’m out there. I’d be terrible in an office situation.”

The truest sign of a burgeoning trend is the number of similar series in the works. The History Channel is planning “Tougher in Alaska,” about the difficulty of some common jobs there. Discovery is excited about “Last Man Standing,” with six people who compete in sports originated by remote tribes.