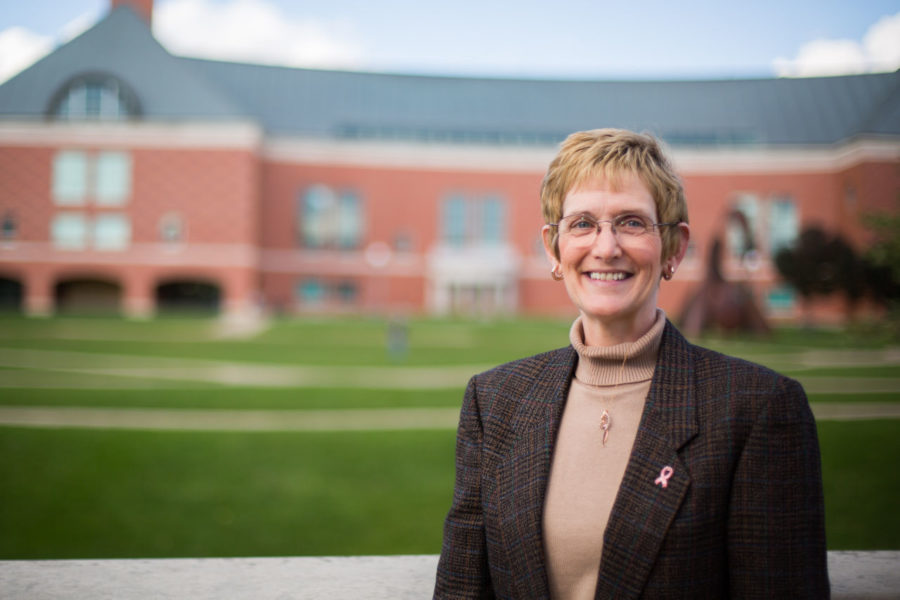 It was a Monday when Angie Dimit found the lump.

Overwhelmed by the possibility of what it could be and a cousin’s recent death, she didn’t tell her husband, her two sons, her mother or her siblings.

Instead, she remained “neutral.” Refusing to self-diagnose, Angie underwent a biopsy and an ultrasound the next day. But it was then that her doctors confirmed it was invasive lobular carcinoma — breast cancer.

Now, just over two years post-diagnosis and 20 months after her final chemotherapy treatment, Angie, director of advancement for the College of Engineering, is back in her office and hopes to spread what she learned in her breast cancer battle to others.

“I think, as a survivor, all of us really feel like it is important that other people understand that there is no ‘typical’ experience, but that when you hear you have cancer, you just become a fighter,” Angie said.

Now in her 27th year on the faculty at the University, Angie said her desire to pay forward her knowledge and promote education and awareness of breast cancer stems from the support she received during her own battle.

Angie is co-chair for this year’s Making Strides Against Breast Cancer Walk on Oct. 18 at Meadowbrook Park, located at 2808 S. Race St. in Urbana. The walk is a 5K backed by the American Cancer Society, which allows survivors, patients, families and friends to raise awareness for breast cancer.

It was last year’s event that sparked Angie’s interest. Even though she was in a clinical trial at the time for breast cancer, Angie decided to participate despite hesitations.

“I didn’t even know last year if I could walk a 5K. I was still in treatments, but I found it to be so inspiring. That’s why I decided to get involved in it again,” she said.

For Angie, her battle with breast cancer was partially a matter of lineage.

The diagnosis came at a time when Angie discovered she had a rare gene mutation, which is caused from a long family history of cancer. Her father passed away due to prostate cancer, and her mother is a colon cancer survivor. The majority of her father’s family members had been diagnosed with some form of cancer in their lifetimes as well.

When the gene, BRCA2, has an abnormality, it increases the likelihood to develop breast cancer for women.

For most women, approximately 12 percent of the population will develop breast cancer, according to the National Cancer Institute. For Angie and her family, that likelihood rose to 87 percent, she said.

The Tuesday after Angie received the confirmed diagnosis, she told her husband and older son, John, at home that night. But Angie was forced to tell her younger son, Jordan, via Skype, because he was in London at the time. It was something she said she would never forget because the video wouldn’t work on the call.

It was then that Angie made the one regret she has about her cancer.

“I told my mom and my sister on speaker phone, rather than driving down to tell them,” she said. “I knew I couldn’t do without crying, and I knew if I cried, they would cry. I knew they were going to fall apart … It devastated my mother and my sister, absolutely devastated them.”

Angie said she continued to update both friends, family, co-workers and students about her story through both Facebook and her CaringBridge page.

Following the diagnoses, Angie had a right mastectomy. Four weeks later, on Sept. 26, 2012, she began her first chemotherapy session at the Mills Breast Cancer Institute at Carle Foundation Hospital in Urbana, not knowing what to expect.

“Everyone has heard of horror stories from chemotherapy, but I just tried to be very self-disciplined to say, ‘Alright, I am starting neutral, and if something happens, it does. If something doesn’t happen, it doesn’t happen,’?” she said.

But her first treatment didn’t go as planned. Angie was admitted to the hospital two days following the chemo due to her strong reaction. After speaking with her oncologist over the three days while she was in the hospital, they decided to lower the dosage of chemo that she was receiving.

“The fact that you know what you are doing (chemotherapy) is preventive, it really keeps you going,” Angie said.

Throughout her treatment, Angie continued to go into work for the first half of the week as often as she could. The chemotherapy would continue until February 2013 when she received her final treatment.

But for Angie, it is support from others that helped her get through the “marathon” of breast cancer.

From the diagnosis, Angie’s treatment lasted 18 months, but with the possibility of reoccurrence and hormone therapy, Angie is looking at a total of seven years for her breast cancer battle. Her treatments are scheduled to end in 2018.

“It takes a lot of personal strength, and it takes a huge support network,” she said. “I was very, very, very lucky to have a number of friends, families and my co-workers here were amazing.”

Included in that support group were her sorority sisters. As an adviser for Gamma Phi Beta, Angie has made countless relationships with the girls in the sorority since taking over, including Dana Glink, a 2013 University ACES alumna.

Glink served as the president as a sophomore and began to immediately work with Angie. Despite having an adviser-student relationship to begin with, Glink said it grew into a friendship that continues today.

“Angie is an incredible woman,” Glink said. “There were days where it was really hard, where you can see on her face that she looked different and she just looked tired and things like that. But she was always Angie, and she was always pushing herself. She was always positive about her outcome.”

But for her colleagues, while Angie is back in the office, her cancer isn’t always on the forefront.

“I think that cancer becomes a part of your life, but it doesn’t necessarily define you,” said John Kelley, director of advancement operations for the College of Engineering. “She has a vibrancy to life whether it is with her work here in the office or her work with her sorority or giving back … It’s the little things she does.”

Kelley said that one of the first times Angie returned to the office after her first surgery for treatment was for the Engineering at Illinois Hall of Fame in 2012.

The event was not only one of the largest events of the year for Angie and the department, but also a part of her four-item “breast cancer bucket list.”

Angie said the list also included celebrating her mother’s birthday on Oct. 8 of that year, attending her son Jordan’s family weekend at Ball State University and seeing her son John’s performance in “Much Ado about Nothing” at Luther College in Decorah, Iowa — a six-hour drive. All of which was done while Angie was going through chemo.

But for now, she has a 90 percent chance of survival, four years left of hormone therapy and a full head of hair.

“You can survive breast cancer. It is a marathon, it is not a sprint, and it is worth it,” Angie said. “Every cancer survivor has their own individual story. It is important for everybody to know that. No two are the same, but everyone is just as important and just as inspirational as mine is. I am just one person, and I just happen to be the person you are talking to.”