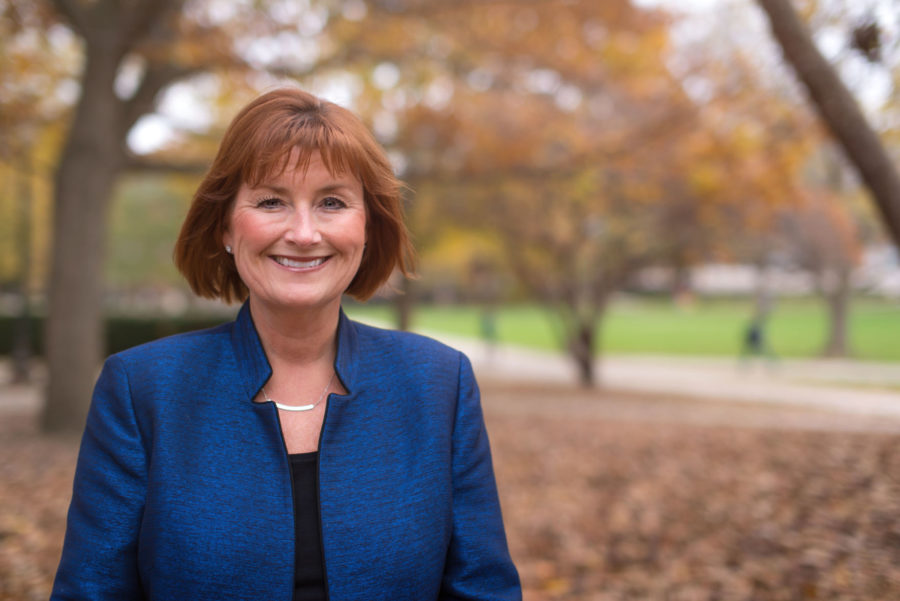 In the pouring rain, Maureen Parks hurried from the parking lot to her office at the Henry Administration Building. As soon as she walked through the door, she put the umbrella down and swung her hood off. But along with her hood, Parks’ wig fell off, revealing her bald head.

President Emeritus Joe White walked by, greeted her and passed along, as Parks stood in utter shock and dismay. She quickly grabbed the wig, plopped it back onto her head and ran upstairs to the bathroom to fix it.

While examining her crooked wig in the mirror, Maureen Parks, associate vice president for University Human Resources, could have either laughed or cried.

She chose to laugh that day.

“It was almost like if I just pretended it was OK, it would be better,” Parks said. “So … I got through it.”

It was after January 2006, just after Parks turned 40, when she was diagnosed with breast cancer.

It happened in a matter of days.

The next day, she had a mammogram, and as she walked into her office, the phone rang; it was the doctor, letting her know that something looked suspicious, and she needed to come in for a sonogram. She had the sonogram the following day and then later a biopsy, and by the end of the week, she was diagnosed with Stage 3 breast cancer — and the tumor was growing fast.

So Parks moved quickly, too.

Parks’ son, Sean, was 7 years old at the time, and she couldn’t imagine a world in which she didn’t get to see him grow up.

She called Robin Kaler, associate chancellor, who had been diagnosed with breast cancer before Parks, and together they went to her biopsy at Christie Clinic at Carle Foundation Hospital as well as the consultation afterward. Kaler also put Parks in contact with her oncologist at Northwestern Memorial Hospital in Chicago, who then referred her to a doctor at Barnes-Jewish Hospital in St. Louis.

At 10 a.m., Parks arrived at Barnes with her sister, husband, best friend and questions Kaler prepared for her. It wasn’t until 1 p.m. that Dr. Timothy J. Eberlein walked into the room.

But for Parks, the wait was worth it. He spoke with her for about two and a half hours, and at the end, she asked him what course of action he would tell his wife or mother to take. Parks chose that path. She had her lumpectomy and radiation in St. Louis because her parents lived there.

After her radiation treatment, Parks received chemotherapy every other Friday at Carle for six months. She took those Fridays off work, but otherwise, her colleagues would find her in the office — some of them completely unaware she spent many Fridays in a recliner chair at Carle.

“I was determined that my life was not going to be interrupted by cancer,” she said.

On Saturday mornings, Parks went on a three-mile, power-walking route with her friend. Oftentimes, Parks would come back after the walk and rest on her couch for the remainder of the day, as the chemotherapy completely exhausted her body.

“It’s not that you’re tired and you want to sleep,” said Lori Jones, who works with Parks and is also a breast cancer survivor. “You don’t want to move. It’s almost like a crushing fatigue.”

Though Jones, human resources associate, has only known Parks for about six months, the discovery that they were both diagnosed in the same year connected them.

“We’re both about eight years out, but at least for myself, you don’t dwell on it but you do know that you’re fortunate,” Jones said. “You look at life a little differently.”

Though she’s eight years removed from her battle, Parks doesn’t forget the sisterhood she developed with other women at the University who were diagnosed, and the support she received from her family, friends and co-workers.

“We were able to say things that not everybody understands all the time, especially in those initial stages,” said Susan Flanagin, associate director for Administrative Information Technology Services and a breast cancer survivor.

A few months after Parks began her treatments, her colleague Flanagin started the same process.

“Because when you find out somebody has breast cancer and you’ve been through it … you want to share all that information with other people to try to help them through their journey,” Parks said.

Parks’ own journey is well over the 5-year mark and today she sports her own hair rather than a wig. However, she still routinely visits the doctor to get bloodwork done and continues taking Tamoxifen, a hormone therapy treatment.

The American Cancer Society estimates there will be about 232,670 new cases of invasive breast cancer in women in the U.S. this year. Breast cancer is also the second leading cause of cancer death in women, only exceeded by lung cancer.

And yet, there are more than 2.8 million breast cancer survivors in the U.S. today.

“It’s really scary, but there are many, many women who have gone through it before you,” Parks said. “You need to just stay strong and fight and give it all you’ve got.”

Alice can be reached at [email protected].