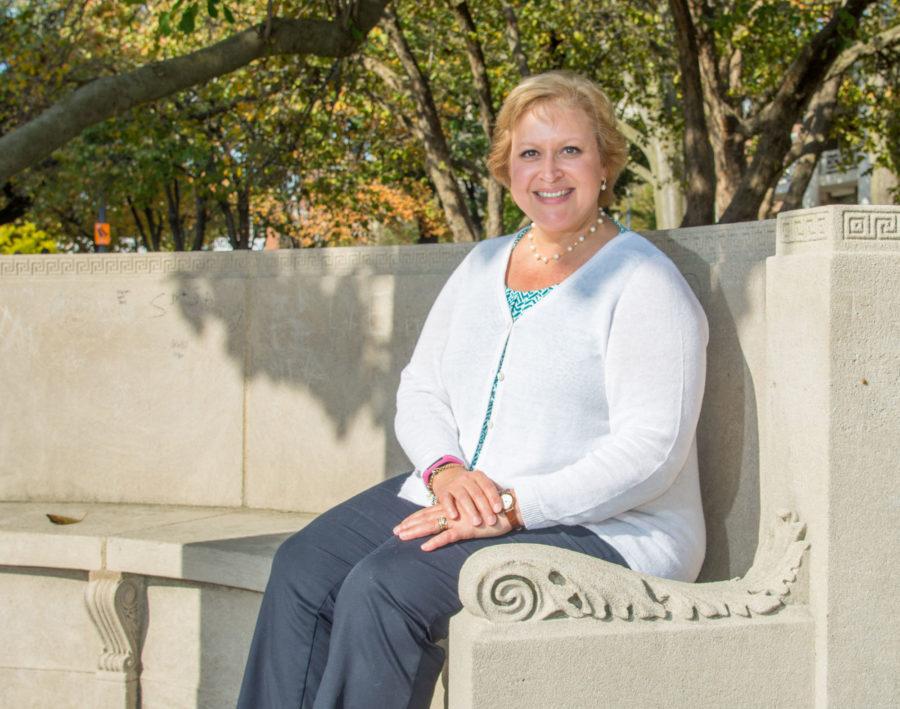 Breast cancer isn’t a battle and there aren’t winners and losers. For those eight months, it was just the disease and her.

“A warrior gives the impression that it’s a battle between equals and either person can win, and that’s not what cancer is,” she said. “Every single case, every single diagnosis is different. I was lucky.”

While it’s been 10 months since her last treatment, Heather, director of communications for the College of Media, is still marked by her breast cancer with a discolored vein where her chemotherapy was administered.

Yet she has always managed to tell it how it is.

“My third appointment with my oncologist, I asked her if she could switch me to the chemo that made you lose weight because I was gaining,” she said. “Shit made me bloat like roadkill. It was un-f*****g-believable. It was like my body was not happy with it.”

She doesn’t agree with many of the organizations behind the pink movement, stating that people need to look where the money is going.

She also finds the NFL’s support of breast cancer by wearing pink hypocritical, since she said they can’t handle domestic violence properly.

And her approach to her diagnosis and treatment wasn’t much different either.

Heather’s diagnosis came in April 2014 through her annual, regular mammogram. While Heather said she loved her time at Carle Foundation Hospital’s Mills Breast Cancer Institute, she didn’t find out about her breast cancer the conventional way by any means. After the mammogram, she got a call asking her to come back in because of a “problem with one of the images,” she recalled.

Her immediate thought was that somewhere along the way, the hospital made a mistake. But when she got the call saying the hospital needed her to come in for a biopsy, her attitude changed.

And after a few days of waiting for a call following her biopsy, Heather went online to Carle’s patient portal to find a list of scheduled oncology appointments the hospital had already arranged for her — before telling her she had cancer. It was then that she took a photo of the page and sent it to her best friend Jen Shelby. Soon enough, Heather’s diagnosis with breast cancer was finally confirmed by the hospital.

Jen and Heather met in the early ‘90s, and after losing touch for a while, Jen’s come to appreciate their friendship even more. She was there for Heather’s treatments, and even though Heather said Jen would cry at a “sappy dog food commercial,” Jen always tried her best not to.

Jen tried to bring levity and reliability to Heather’s appointments by keeping track of Heather’s questions and appointments, while also giving Heather “chemo gifts,” at each treatment. The chemo gifts ranged from a book of autocorrected text message conversations to a turkey platter.

“There’s so many negative things to fall back to, that anything you can do to keep a sense of humor was important,” Jen said. “(Heather) wasn’t going to be defined by the cancer, it was just something she had to go through.”

Heather said her experience at Carle was remarkable, citing the nurses and doctors for many of the reasons why her condition went as it did.

“It’s incredible, and you dig into their background and you see what they’ve done,” she said. “This isn’t the doctor that passed with a C.”

Jen said that Heather’s approach to her condition wasn’t going to determine how she’d end up living her life. Heather doesn’t dwell on much. So Heather returned to work throughout her condition, only taking what she counted as 24 sick days over a span from her diagnosis in April to her final dose of radiation in December.

“I couldn’t imagine not having some place to go and something to focus on, a reason to get out of bed and out of the house,” she said. “That was beyond my comprehension. Having that routine was important to me.”

And that routine continues today in the basement of Gregory Hall, as Heather continues her work for the University.

She is still reminded of her condition by two tattoos. On her back, she got a celtic knot that’s rumored to ward off evil spirits after her initial diagnosis. And on her right wrist, two birds, etched amongst bracelets and a watch, symbolize her freedom from the disease.

Heather can’t summarize cancer in one word. It’s not a battle, and she doesn’t call herself a warrior.

“I was sick, and I went through treatment. According to my last scan, I’m clear for now. But there’s a 14 percent chance it could come back.”