Getting to know, getting to grow: Edamame 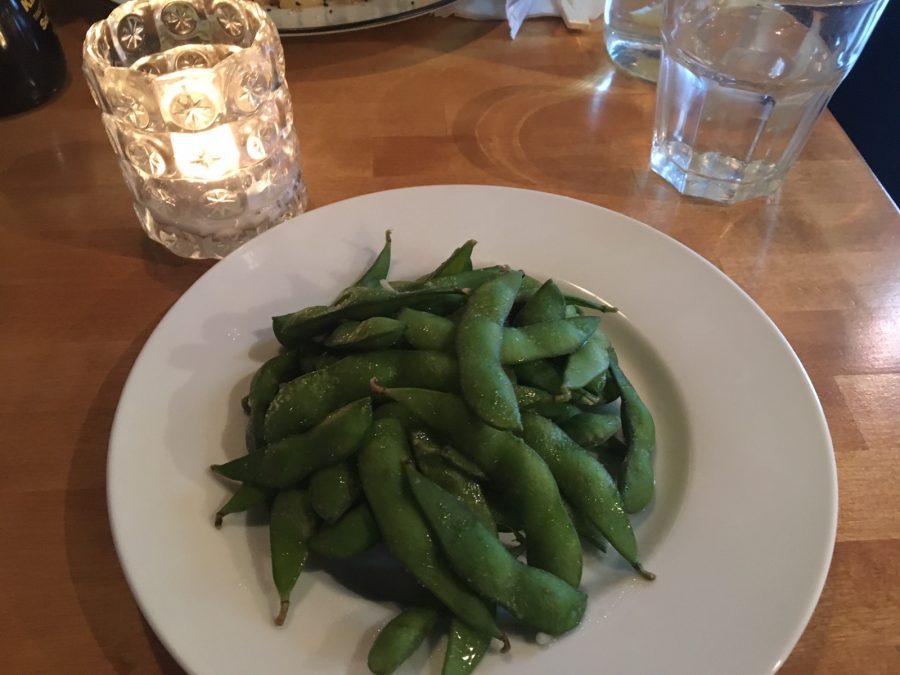 Snacking on foods with soy protein, such as edamame, or fresh soybeans, can help lower blood cholesterol.

Edamame is a type of soybean that has led crop scientists to think outside the pod.

Illinois farmers produced nearly 593 million bushels of soybeans in 2016, according to the Illinois Soybean Association, but none of those went toward the popular snack.

With China as its largest exporter, edamame’s production process is intense due to its more hands-on processes. Thanks to research from the crop science department at the University, the American farming industry is one step closer to growing massive quantities of edamame.

In 2010, Martin Williams, associate professor of crop sciences at the University, started receiving calls about controlling weeds in edamame because of his research focus in commercial vegetable crops and weed management.

Due to increased demand for the product, interest from vegetable processors about overcoming issues like weed management and supply of seed became more prevalent.

“For this crop, we strive to remove hurdles to producing the crop domestically. When we started, the vegetable industry told me that weeds were a major problem,” Williams wrote in an email.

According to an article from the college of ACES, Williams and his team experimented with different types of herbicides to see which protected the edamame yield and eliminated the most weed biomass. Gardensoy 43 proved to be the most competitive cultivar, with the greatest yield and 29 percent lower weed biomass than the other two that were tested.

Williams explained the results of the study can overlap with some of the techniques used on other crops.

“The weed management problems of edamame are not completely unique to the crop,” Williams wrote. “The principles are common to most crops, though some of the details related to weed management in edamame haven’t had the attention of other crops.”

The popularity of the vegetable is not reflected by all health conscious consumers. Local vegetarian restaurant The Red Herring said it has yet to use edamame on its menu under the current management. From a vegan and green eating perspective, it understands the benefits the vegetable brings to an alternative diet.

Jack Kenealy, perishable buyer for Common Ground Food Co-op in Urbana, said while there are farmers growing the crop locally, the store only carries frozen versions of edamame. Kenealy said frozen vegetables tend to retain their flavor surprisingly well. For consumers, imported produce is not as much of a hassle than it is for those who are distributing it.

“Food companies need to know a lot of detailed information about the products they are selling, and some of that information can be obtained and verified more easily if that crop is grown in the United States,” Williams wrote.

Kenealy said from his perspective, farmers may be less willing to produce edamame while the practices are still less common and provide risk of crop failure. The harvesting of edamame comes in a rush rather than a steady flow like other vegetables. Unpreparedness for this process and unfamiliarity with a short time schedule can deter farmers from trying this type of crop.

“Edamame in a big field will often all ripen at the same time. You need to know how to process it and be ready for it when it comes. (This) also decreases the amount of time it’s available,” Kenealy said.

Because edamame is a complete protein, it can satisfy hunger with all the amino acids one needs, and compared with other complete proteins, it also has less fat and sodium. Though Kenealy prefers lima beans, he credits edamame for being so versatile and substitutable in various recipes.

“Putting some on a salad, compared to meat, will keep you full for a while and also give you a lot of protein and fiber that you wouldn’t otherwise get with other typical salad components,” Kenealy said.

Though it is hard to track the data of edamame growth since there is no agency solely focused on it, Williams said one of the professors who contacted him back in 2010 reported they have quadrupled their crop. Integrating the research into current edamame practices may lead to eventual mass production of the vegetable in the U. S. or at least more people giving it a chance and trying the taste for themselves.

“I’ve learned that people who say they don’t like edamame don’t actually know how to eat it. Eat the seeds, not the pod,” Williams wrote.