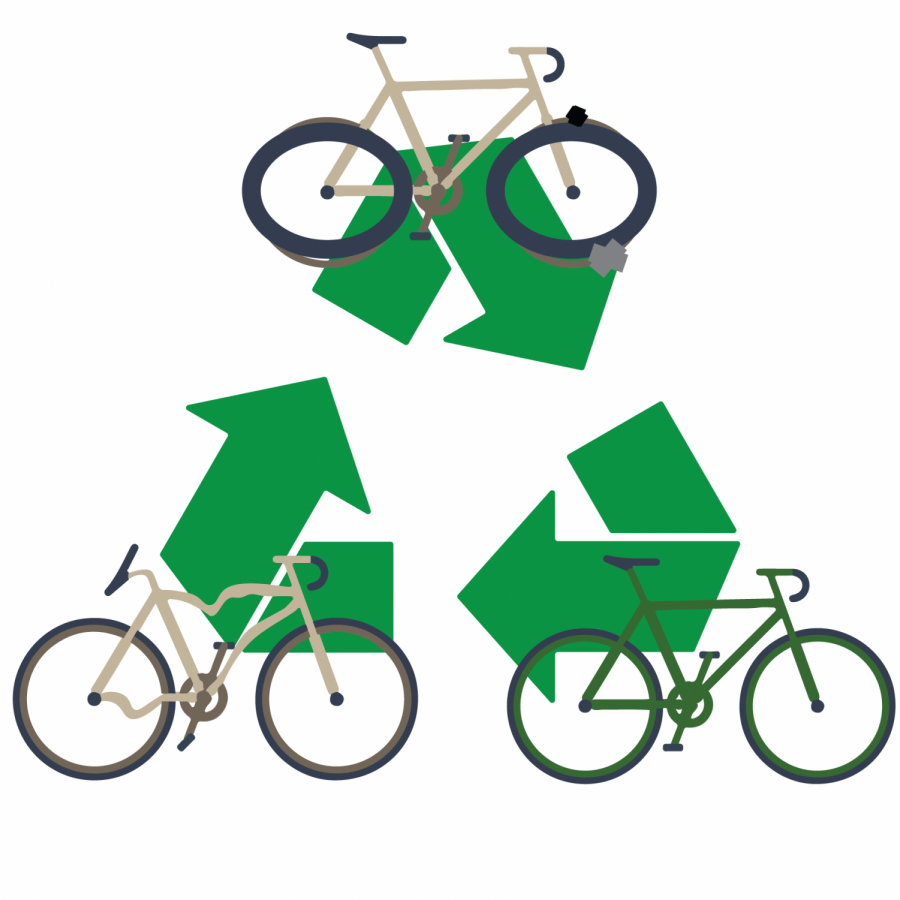 On a campus as expansive as the University, students try to reach their destinations as quickly and efficiently as possible. Because of this, there are a plethora of bicycles both on and off the streets.

Illinois Enactus is trying to address the problem of bike litter and help the environment while doing it.

The group at the University has been a key figure behind various sustainability projects on campus and in the C-U area.

“Enactus is a registered nonprofit organization,” said Jasmine Tew, vice president of communications for Illinois Enactus and junior in Business. “We do a lot of social entrepreneurship works, and it’s product based. So all the products that we have in our portfolio, students source it. They go through a Capstone program and we make it from scratch, basically.”

A few of their projects include Grounds from Growth, Operation Forward, Stay Glassy, En-able-ing Entrepreneurs and Lean & Green, among others.

Enactus not only touches upon social issues but attempts to reach core problems by tackling them from the root. The nonprofit believes this is the way it can truly ensure its impact makes a difference in society.

It is this motto to strive to make noticeable differences which motivated the project manager of the Circle Cycle project, Hui Yi Koh, sophomore in DGS, to join Enactus. The project’s aim is to repurpose used bikes and solve the bike waste problem on campus.

“I’m from Singapore, and back in high school, I was involved in (an organization similar to the Girl Scouts) and Green Council, which  … basically promote(s) environmental responsibility on school,” Koh said. “One thing that I was a bit frustrated with when I was in Green Council was that our efforts didn’t seem to create change that was lasting.”

The goal of projects implemented by Enactus is to not only try and fix issues from the grass-root level but to also engage a wide variety of members in the community when doing so.

“At the end of the school year, people (just) dump their bikes. I think that (the) University spends a lot of money on it,” Tew said. “That’s where the idea (for Circle Cycle) came from.”

The project will benefit local, low-income high school students. These students will be taught to repair used bicycles, so the bikes can be sold to people in the area.

At the end of the training process, the students each get to take a repaired bike home for free.

The project will last about a year. Afterward, the entire operation will be passed on to local contributors and become a self-sustaining unit.

“We start with researching a need and structuring a project. But our main goal is actually to de-link it to a community partner,” said Krupa Patel, executive manager of Circle Cycle and sophomore in Business. “Eventually (we) have it so it’s self-sustaining and autonomous so that it generates some value somewhere in the community — structure it so that we can hand it off eventually.”

Recently, Circle Cycle won a $10,000 grant from the Ford Fund, a competition against six other teams. Three of the teams were international, while three were from the U.S.

Patel recalls a few of these teams. “There (were) people from Morocco, from Ghana, from Brazil, a couple universities from the east coast and then us,” she said.

She had full faith in the project, the team, the speakers, but she was still somewhat astonished this novel idea would strike gold.

“It was a surprise because it was a new project,” Patel said. “We were going up against projects that had already been established for about one to two years”

Now that the project has won the fund, the plan is to be judicious about the money and to really plan out their operations.

“I wanted to do something that would create long-lasting change,” Koh said. “I believe that behavioral change needs structures behind it to support it.”