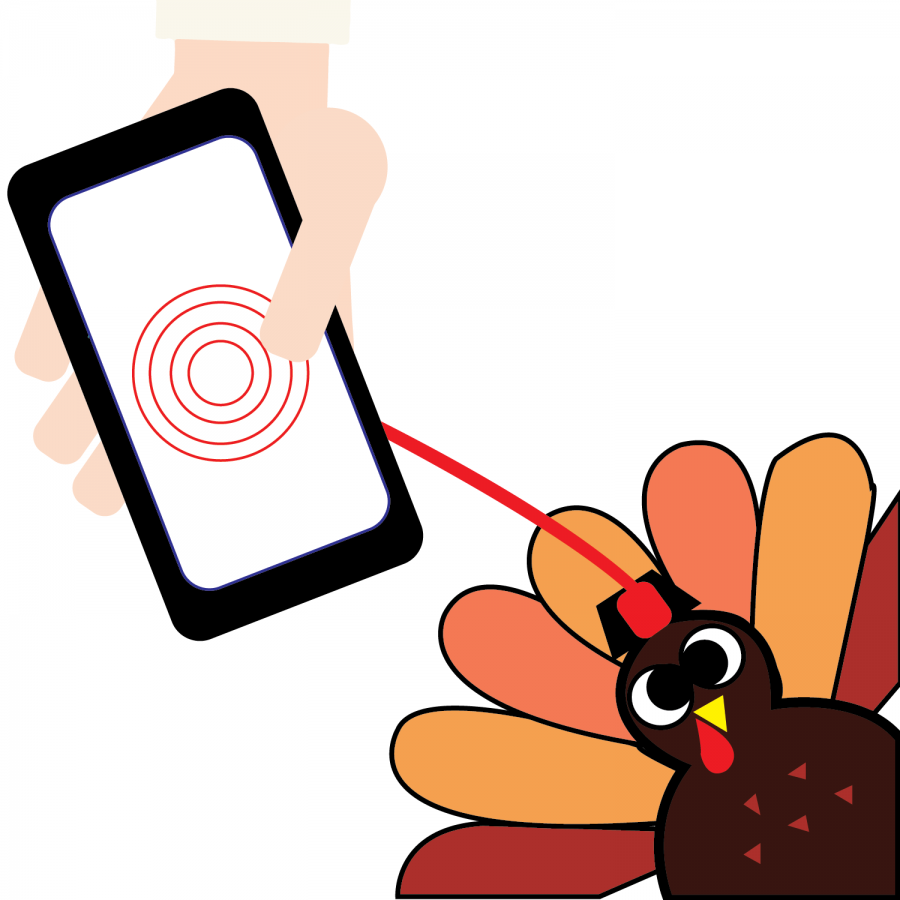 The turkey slowly circles the perimeter of the net, eyeing the corn. Its eyes glisten as it carefully plans its escape. Stepping too close towards the bait could end in capture. The smart bird decides not to slip under the complex cloth trap.

This is what trying to escape a researcher’s trap may look like from the bird’s perspective. Christine Parker and Morgan Meador are researchers at the University who track turkeys using GPS systems to study their behavior.

Christine Parker is a fourth-year doctoral student in the Department of Natural Resources and Environmental Science. She earned her master’s degree from the University in 2012. Although Parker is now working with turkeys, her master’s research was focused on ticks found among songbirds.

Meador is a graduate student at the University and is currently working on the turkey project as her graduate project.

In general, both Parker and Meador agree that there is a lot that people and students may not know about turkeys.

For example, mother turkeys sit on their eggs for about 23 hours. Also, turkeys can actually fly and roost in trees.

“Turkeys are quirky birds! They are so smart,” Meador said.

Parker researches the nesting behaviors of wild turkeys during certain seasons in relation to change in forest environment. She specifically focuses on their behavior in areas of the forest that were burned by the Department of Natural Resources (DNR) to cleanse the forest.

“(The Illinois DNR) … are particularly interested in how prescribed fire and forest management that they are doing across the state is impacting wild turkeys generally,” Parker said.

Similar projects that interest the DNR are those regarding forest management such as Timber Scene Improvement wherein certain trees are removed from a forest ecosystem based on their size, age or class.

While regulating the forest landscape is essential for the plants in the forest, certain significant species should not be affected, like turkeys.

Researchers are trying to understand how different forest management styles may affect songbirds, another significant species in forests.

So another project in the lab is looking at songbird responses to such management. All researchers participate in point counts during the summer for a couple of weeks at various locations. That is, they do bird surveys that involve listening and looking around the ecosystem they are in. They then write down the name of every individual bird they hear or see. Such surveys are down at over 100 locations throughout Illinois.

Using this data, they look at maps that show where there are burns and cross-reference those with maps that show the results of bird surveys. Through this process, they can see how bird communities are changing around where fires are occurring.

Parker and her team have been to a few forests doing a similar analysis for turkeys. She has been to the Steven Forbes Recreation Area, near Salem, Illinois.

Parker’s research tries to understand how turkeys respond to these burned areas of the forest, whether turkeys use these areas more or less than they did before. Additionally, if they are using these burned areas, whether the recency of the fire or the frequency that the area is burned make a difference.

Parker also studies turkeys’ incubation periods, or how often turkeys stay on their nests. A surprising finding is that they spend 23 hours sitting on their nests. Parker explains that while their dedication is impressive, it may lead to problems — like getting eaten.

Investigating how often they get up, in what variation and when they choose to get up all help Parker determine how incubation periods affect how successfully the young turkeys will be raised. This then can be linked to the habitat, again looking at whether a more dense habitat would mean a turkey takes fewer breaks.

So far, the finding indicates that there is actually no significant impact of territory on turkey life.

However, Parker explained the reason this research is important is that they are a valuable game species.

“In addition, they are a valuable species as themselves,” Parker said. “People like to see them on the landscape. And so generally understanding how they are responding to human-introduced disturbances in their habitat is extremely important.”

She said that even if the burned areas are thought to be good habitats for turkeys, a new strategy needs to be created if the turkeys don’t move to inhabit those spaces.

The GPS aids in research. They are programmable in a way that is different from traditional systems of measurement and are accurate to up to 20 meters.

“Each of these emits a beacon, like a radio signal, and we have antennas that we go around with,” Parker said. “The antennas pick up that signal and transmit it to this little radio it’s connected to and gives off a little beep.”

This type of measurement system is similar to old systems, wherein the beeps had to be tracked and the bearing noted, from which the location would have to be calculated. The GPS that Parker and her team use, on the other hand, is much fancier.

They are programmed so that they communicate with the satellite to record their locations. They are set up to record a location every two hours during daylight and once every night so that the team doesn’t have to constantly be chasing the birds around.

Additionally, once the GPS is set up, it will automatically send the researchers information so that researchers do not have to recapture these birds that are really tricky to catch.

“They also have a built-in accelerometer, so like a Fitbit. So that is where my incubation behavior project is coming in.” Parker said.

Meador has accompanied Parker in her work since 2016 before recently setting off to do her own research on turkeys as an extension of her previous work in January of this year. The main objective of her project is to determine if black flies influence the reproductive success of wild turkeys.

“Black flies are blood-feeding flies that have the potential to reduce productivity among wild bird populations, but it is a relatively unknown. This is where my study comes into play,” she said.

As of now, her plans for the immediate next steps of the project are to capture and band turkeys from January to March 2019. She described the process: “Capture turkeys, track turkeys, deploy CO2 CDC light traps to capture black flies, conduct vegetation surveys, etc.”

Meador has a long way to go in terms of her research, so there are no serious challenges she is facing currently. There are a lot of aspects of the work she does that she enjoys, in general.

“(In) most field studies, I enjoy the hands-on portions of my work. I also enjoy communicating with landowners and the public about my project,” she said. “It is so important to get others excited about whatever project you are passionate about. Hopefully, they, too, will become involved and invested in your work. Spread the word and tell others.”

Such research on turkeys impacts biodiversity and environments in ways that we would never imagine. Meador said that one thing about their work that not everyone knows is that volunteers are always welcome to help with capturing events.

“It is a unique experience that most people will never have the opportunity to do, plus, all this research is happening right here in Illinois. Relatively speaking, in our backyards,” Meador said.