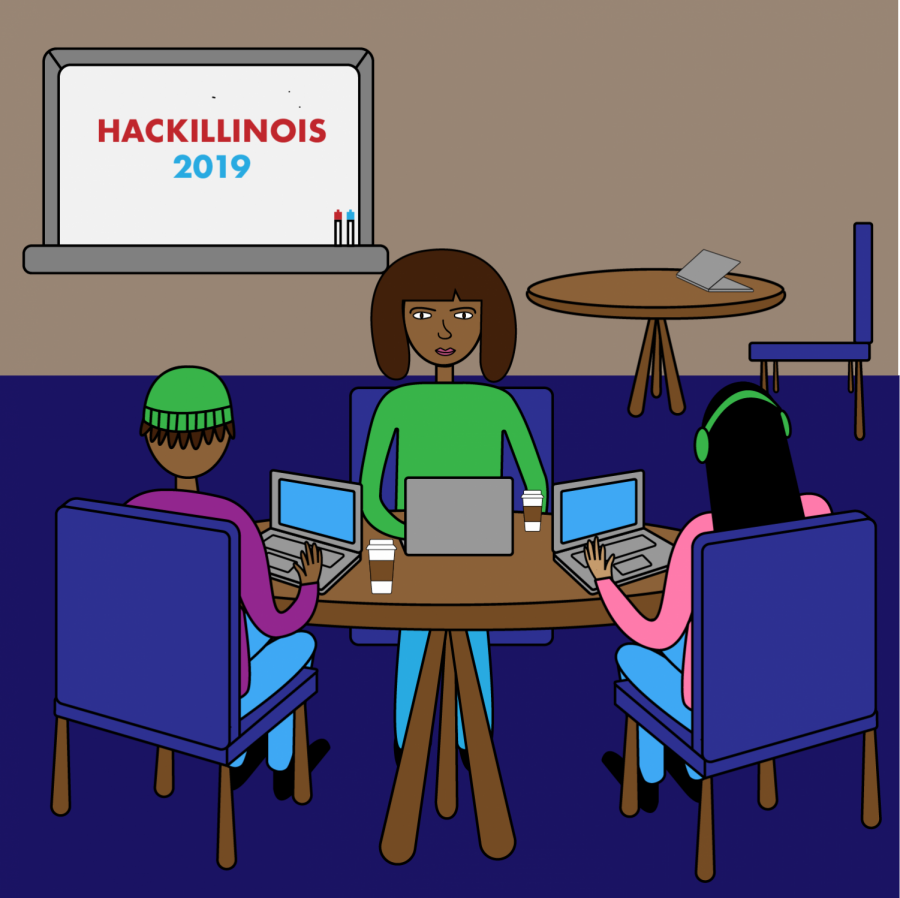 There’s a rush of excitement, a buzz in the air, as word spreads throughout campus that this weekend, students will have the opportunity to make waves. Come Friday, hackers, volunteers and sponsors alike will storm Siebel Center, the Electrical and Computer Engineering Building and the Digital Computer lab. At nightfall, the ECEB will be transformed into an aquarium with blue LED strips and the imagination of a thousand participants.

HackIllinois 2019 is almost here. Based around the deep sea, the goal of this year’s event is to cross new frontiers.

“Every year has a had a frontier design theme of various kinds,” said Kyle Begovich, junior in LAS and head of the logistic and attendee experience team.

He said this year’s theme was a challenge to come up with because after six years of HackIllinois, they have used many themes. This year’s tagline, “Make Waves,” is meant to be moving and inspiring to participants.

Begovich has had a lot of experience, both as staff and as an attendee in previous HackIllinois events. His freshman year, he went all out, joining everything he could despite having had little experience. To him, HackIllinois stands out because it focuses on beginners.

Unlike most hackathons where the first couple of hours are filled with cracking open the Red Bulls and getting going, HackIllinois has a softer, more nurturing beginning.

You don’t have to be a pro hacker in order to participate, Begovich said. Instead of simply letting participants free to create whatever they desire for 24 to 36 hours to win the competition, HackIllinois provides a more rewarding experience for those who don’t take home a prize.

“HackIllinois is so much more different because in the end we’re still so much (more) focused on giving support to beginners,” he said. “Considering I was once a beginner at HackIllinois three years ago … I really like giving back so I guess this is how I come closest to it.”

Nitish Natarajan, freshman in LAS, and HackIllinois attendee, has very specific hopes for his first experience. His greatest hope is for copious amounts of coffee.

Natarajan wants to experience everything HackIllinois has to offer from the food, to the special events and the minimal sleep that is often associated with hackathons.

It’s a long-standing tradition of HackIllinois to have Nerf wars as part of the event, which will be taking place this year at the Kenney Gym Annex. This year, HackIllinois has the added bubble football and human foosball.

“Honestly its one weekend and it’s also my first Hackathon,” Natarajan said. “So, I just want the whole experience. I want to be hardcore coding and just inhaling coffee. I want to be raging with my mates at Nerf wars, I want to meet new people and learn from my mentors and, ultimately, I want to pass out after the closing ceremony for the next 24 hours. There’s a certain satisfaction knowing you suffered, but it was for something worth remembering.”

Aparajitha Adiraju, sophomore in Engineering and one of the directors of HackIllinois this year, has her own unique perspectives on HackIllinois. She said the University will be rewarding participants to motivate them to keep their projects going.

“It’s not a matter of number of lines of codes,” she said. “If we see somebody who has a team of five really experienced people who built a cool technical that them and maybe their friends will use yeah its impressive, but we (would) rather a have team of 10 beginners working on something together with their mentors that any of them and any of their skills levels can really enjoy as well.”