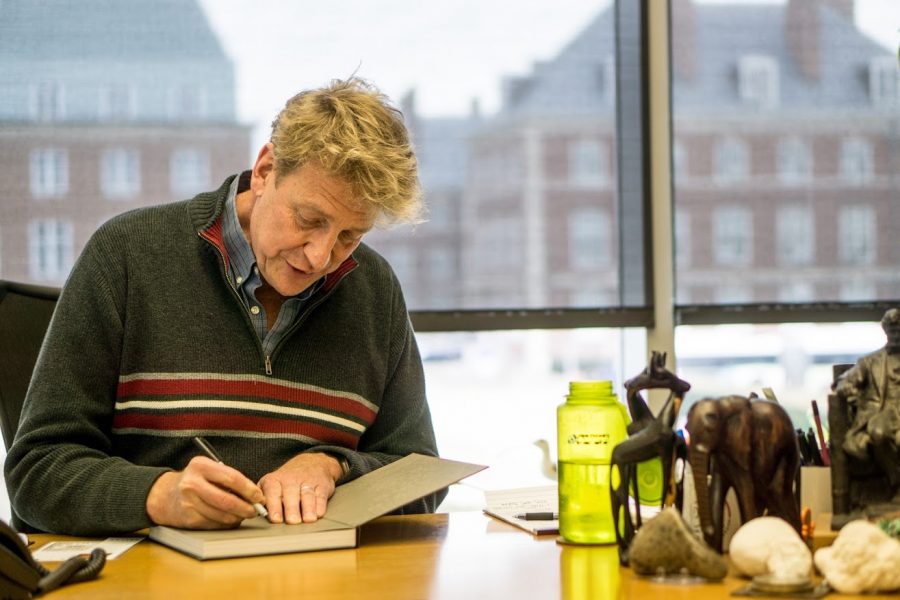 Professor Bruce Fouke works in his office at the Carl Woese Institute of Genomic Biology gatehouse on Monday.

As a geobiologist, professor Bruce Fouke analyzes how life and Earth have interacted and evolved over time.

Fouke also has an appointment at the Carl Woese Institute for Genomic Biology, or the IGB, and serves as the director at the Roy J. Carver Biotechnology Center.

At IGB, Fouke and his team work on a variety of projects that seem to be unrelated but are actually interconnected.

“The interaction between life, fluids and minerals, almost everything is a part of that,” he said.

For example, his medicine-kidney stone project analyzes urine, examining the living single bacterial cells and the calcium oxalate mineral. Fouke studies how all these pieces fit together.

As a child, professor Fouke grew up near a farm in Iowa, and his parents always encouraged him to be curious about the world around him. He said while neither of his parents were scientists, they understood the importance of learning about life and nature.

During his childhood, he found and collected rocks, notably a lot of limestone. Limestone can be found in abundance across the Midwest, but people often forget limestone come from corals and seashells in the ocean, something that baffled Fouke as an adolescent.

It wasn’t until he got to college that geology became a plausible career option, originally beginning his higher education as a civil engineer.

As a junior, he took geology as an elective.

“I got up from my first lecture, walked across campus and changed my major to geology and never looked back,” he said.“For me, it was like the heavens opened and the angels sang and the harps were playing.”

His technical background in engineering and math helped him in his geology studies. Geology also placed him in the field, giving him memorable adventures of going backpacking in Colorado and learning to scuba dive.

After earning his doctorate, Fouke hoped to teach at a small liberal arts college to both teach and conduct research. However, he said no school would hire him because they didn’t think he would be happy given his exciting field research and zest for adventure.

As a result, he pursued three consecutive post-doctoral research fellowships in Amsterdam, California and Mexico.

When Fouke arrived at the University, he met Carl Woese, renowned microbiologist, professor and researcher who revolutionized phylogenic taxonomy. Fouke credits Woese to changing his life.

In the summer of 1997, Fouke had been seeking a microbiologist to assist with research for NASA’s Mars Mission. He was looking for microbes in water and mineral deposition to find microbe fossils that came out of hot springs. Water is a prerequisite for life, and these findings could implicate extraterrestrial life on Mars.

However, Woese encouraged Fouke to learn microbiology himself.

Fouke’s first trip to Yellowstone National Park was to search for single-celled organisms in hot springs because this is where life on Earth evolved first. These fossils were difficult to find, for they are a micron in diameter. However, the implications of these findings could be related to oil and gas production, and there were medicinal applications as well.

Following all the research and adventures, Fouke, with the help of his wife, decided to settle down and look into pursuing professorship again. Because his role is so specialized, there were only three positions in the whole country, and he was offered all of of them.

He came to the University because of its reputation and access to resources. In regards to people who say Illinois is the middle of nowhere, he said “(it) is actually the middle of everywhere.”

Fouke is currently working on the Center for Universal Biomineralization Sciences, trying to integrate all different departments on campus to work on interdisciplinary research within a sustainable structure that can persist for years to come.

The variety of work has implications on biomineralization of the human body, food security, climate change and weather.

Fouke loves to teach because he believes science explains connectivity and relevance. He wants to help people realize how science engages with society and how the world’s political and global issues can also be seen through the lens of science.

Lauren Todorov, senior in LAS and undergraduate researcher under Fouke, said Fouke’s passion for his discipline is contagious and reflective of her own views on science.

“Science is the search for the truth,” she said. “It is a constant curiosity.”

She said the research has applications to other planets as well. In the future, she would love to continue working in his lab.

Like Todorov, Saw is also inspired by Fouke’s interdisciplinary work.

“The fact that geologists and physicians can work side by side to solve medical problems and find new therapeutic directions is incredible,” she said.