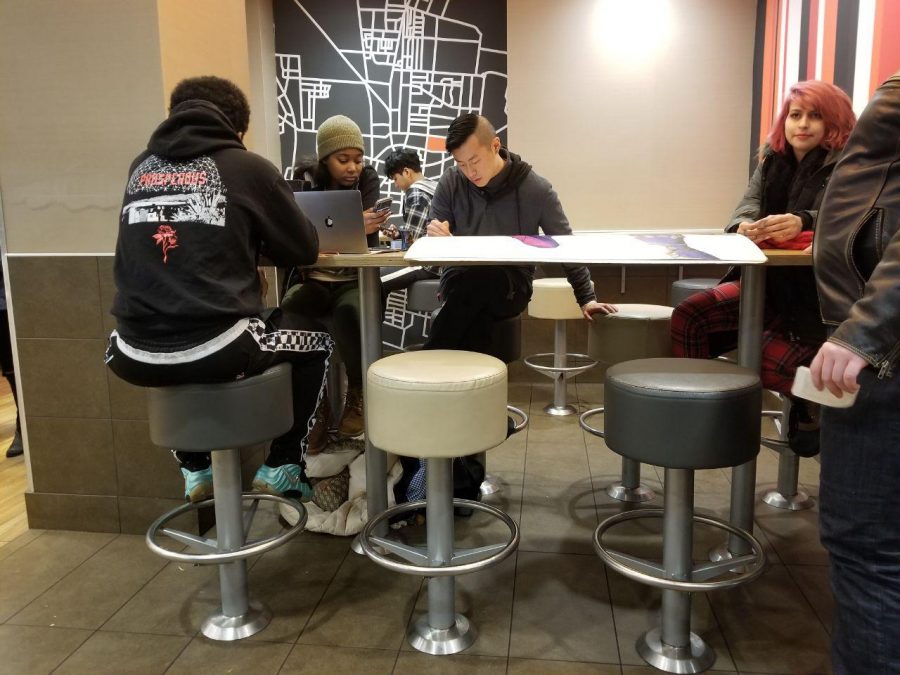 David Wang plays music at a table in the Green Street McDonald’s on November 10. A prominent feature in the late-night atmosphere for the past three years, Wang, recent University graduate, announced the end of his tenure as the McDonald’s DJ this summer.

Some people end their night out with a hamburger and fries, but for others, the McDonald’s on Green Street is where the party begins.

Three years ago, a member of the RSO Dance 2XS grabbed dinner at McDonald’s after dance practice and forgot to disconnect their portable speaker from their phone. After receiving positive attention from the staff, David Wang, a computer science alumnus, became the fast-food chain’s official unofficial DJ.

“The staff heard music coming out of my backpack, liked the song I was playing at the time and asked me to play some more,” Wang said. “That snowballed over time to the point they let me bring a full-sized speaker and basically replace the radio any time I wanted. It was more of an informal agreement between McDonald’s, its managers and me, as opposed to a formal contract.”

Wang said that eventually, the owner and the corporate supervisors found out about his gig; however, they were happy to let him play music as long as sales and reviews weren’t decreasing.

But the restaurant’s upper management weren’t the only ones enjoying Wang’s performances.

Maddie Toth, sophomore in LAS and McDonald’s employee, said it was always nice to see a friendly face while working, and she would spend her breaks with Wang singing or watching Bob Ross videos.

“David was the highlight of my day,” she said. “He would come and joke and always make sure I had a smile on my face. I think (the crowd) enjoyed his presence as much as the next. Nobody ever complained and everyone was looking forward to seeing him every night, even us workers.”

Because of Wang’s popularity and relationship with the staff, people assume he works for McDonald’s; however, Wang said it’s just because he enjoys it.

“It’s not a job position of any sorts, and I don’t get paid, though I do get the benefit of the free drink and occasionally free meal,” he said. “There is no application process, and frankly I am as surprised as anyone else that a McDonald’s franchise has allowed me to do this.”

Wang said McDonald’s is one of the only locations on-campus open after 11 p.m., so it is a prime location for someone who likes to spend time with people on the weekends instead of going out to bars and parties.

Because of the late-night McDonald’s atmosphere, Wang said R&B was the genre he played the most.

“My opinion is that, outside of opera, R&B generally has had some of the best singers, which is why I think it appeals to me so much as far as modern music is concerned,” he said. “It’s also a good genre to play as a contrast to the +more energetic songs people will hear at a bar.”

Although Wang has become more popular on campus throughout the years, his time as a DJ ended July 5 shortly after he graduated, and he said he doesn’t have any current plans to continue DJ’ing in the future.

“Playing music at McDonald’s has never required more from me than having a playlist that people in general like,” he said. “I don’t know transitions, have never used a mixer or any equipment really associated with professional DJs. So think of me as an intelligent radio instead.”

Jesus Alvarado, junior in Engineering, said going to the fast-food chain felt similar to a bar, since people would always enjoy the songs Wang would play. But that was one of the DJ’s many talents.

“I can tell he must like music a lot because I have seen him on multiple occasions since then during my midnight McDonald’s runs,” Alvarado said. “Apart from a passion for music, he seems to have a passion for art since he was always working a piece when I visited the McDonalds. His artwork was very nice and I remember complimenting him on it.”

Wang could usually be seen drawing or painting while playing music at the restaurant. This fall, he will be pursuing an art degree at the School of the Art Institute of Chicago.

Playing music and making art in a popular restaurant on a college campus may seem like it would attract fun, light-hearted conversations; however, Wang said he often was told serious life experiences.

“Part of being the ‘McDJ’ is that whether I intended it or not, I’ve become an informal therapist of sorts for many people,” he said. “I don’t offer advice in these situations since I am not sufficiently informed, but while I am there I make sure I am someone that people can vent (to) without judgment, especially when inhibitions are down.”

Wang said it’s difficult to answer the many questions he’s been asked about being the McDonald’s DJ because he never intended to be in this position in the first place, nor does he have any expectation of leaving a legacy.

He expects to visit every once in a while and play music if management continues to allow him the privilege.

“I expect once I’ve moved on, the whole McDonald’s thing will just go back to the way it was three years ago, and that’s OK,” he said. “I am content if people are made happier by going to that McDonald’s and listening to the music I play while I was there.”