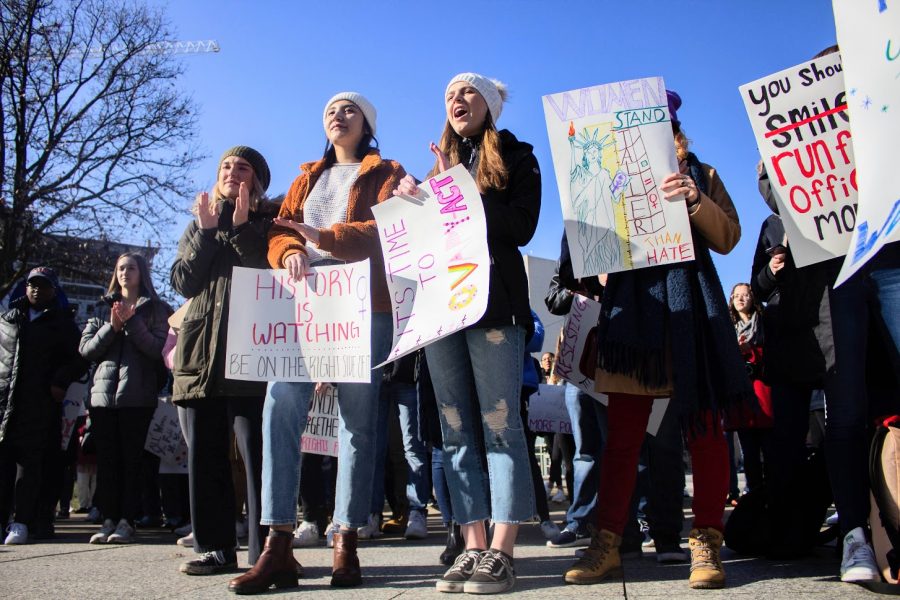 Students gather in front of the Alma Mater for the Women’s March on the Main Quad.

The University is home to many students, all who identify with different races, cultures, ethnicities and traditions.  As of fall 2017, the University had a total enrollment of 47,826 students, 33,624 of which are undergraduates. Within this undergraduate population, 5.2% are African American, 15 % are Asian, 9.3 % are Hispanic, 2.65 % are multiracial, 43.44 % are Caucasian and 23.18 % are International. With such a diverse student body with so many voices and power to bring change, protests, marches and demonstrations can unify students and make an impact.

Gauri Konanoor, senior in Engineering, organized a demonstration on Dec. 18 to protest the Indian government. Their government recently passed a law targeting the Muslim population of India through a citizenship bill, which granted citizenship to minorities who immigrated to India from Bangladesh, Pakistan and Afghanistan, for all religions, except Muslims.

Konanoor said the incident of police brutality at Jamia Millia Islamia University, situated in the capital of India, broke her heart. She said it gave her the courage to add her voice to the movement started by students across India.

“As someone who grew up in a sheltered, homogeneous environment in India, the education and experiences at UIUC, and meeting different people from different cultures really broadened my perspective,” Konanoor said. “I’m sure there are lots of students on campus who have a perspective and have been affected by the things going on in India — so I thought the protest was a good idea.”

Konanoor said she faced several obstacles while organizing the event. Support for the protest did not meet her expectation, though part of that she attributed to the busyness of finals week. She also said because Illinois is a STEM-focused university, she believes students are typically uninterested in these issues.

“Students at prestigious liberal arts colleges, such as Harvard, are quick to voice their concerns,” she said. “In fact, Harvard led the impactful open letter to the Indian Home Minister, signed by hundreds of students across America, two days before my protest.”

Allison Burke, sophomore in Engineering, has also been to a fair number of protests, though of a different variety. Her reason for protesting stems from her love of nature and interest in plants and animals.

This progressed into an attention to conservation and the cultivation of plants. Though she has participated in protests on social issues, her campus advocacy has been focused on climate change related activities.

Burke said, “I think the University could have handled a lot of things better, and I have never really been the one to shy away from voicing my opinions, but the University is riddled with controversy on every corner, which really gave me the anger and confidence to get out there.”

Burke, who’s attended the climate change protest twice, said she had a great time.  For the first march, she made a sign that read “Literally Just Stop Killing Trees.” Even though it occurred during winter, no Midwest weather could have stopped her from marching.

Saumya Agrawal, sophomore in LAS, was also in open protest of the NRC and CAA acts going on in India. She was even bold enough to start a petition to send an open letter to the Indian government, as Harvard did.

Agrawal said she did not get much support for the article which frustrated her. At the end of it, she said she managed to gather 50 signatures but later had requests from people to remove their name because they were traveling back to India.

“I think people should know what it is before you support it. It’s important to support something not because everyone else is doing it but because you believe in it yourself. You can’t sign on and leave whenever it suits you; you commit fully or you don’t at all,” Agrawal said.

Agrawal, who has been to multiple protests in India, said there is sometimes a stark difference in the way protests are carried out. She said India can be a little more chaotic and powerful at times of protests, arguably justifiable to an extent.

She said India has problems that people in America would not understand. While in the U.S., women’s protests focus on issues like equal pay, in India, she said people used to protest against sati (a practice where widows throw themselves into their husband’s funeral pyre), and are still fighting against child marriage and for women’s basic access to education.

“While equal pay and other things are still things we want changed in India,” she said, “We can’t skip step one, two, three before we get to step seven, eight, nine.”

Konanoor believes as people, we all should voice our opinions. “We’re students of U of I. I think, if we believe in something, we should fight for it, despite the obstacles.”

Editor’s note: The original article stated that sati is actively being protested in India when it is not anymore. The Daily Illini regrets this error.