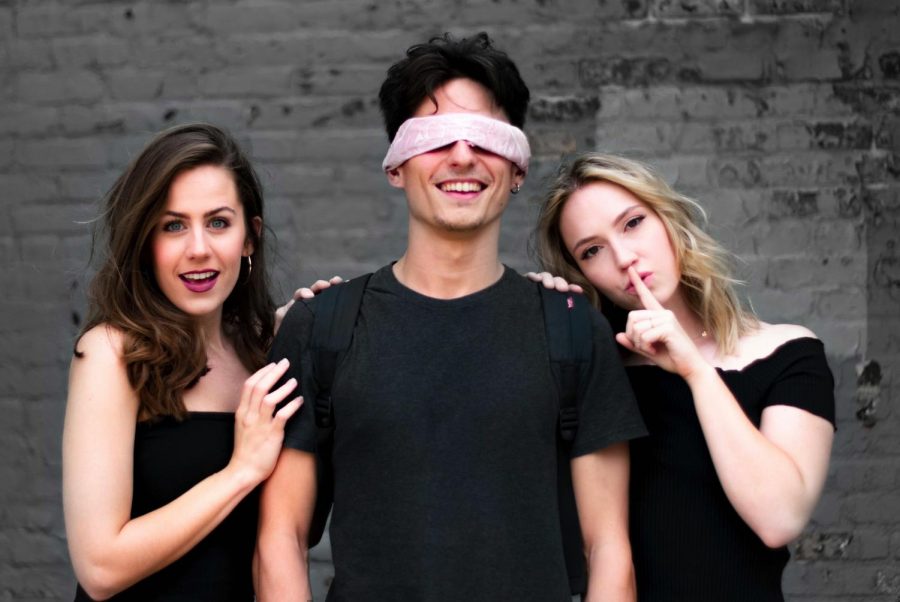 Photo courtesy of the blindcast

Colleen Bruton (left) and Madison Freeland (right) pose for their comedy podcast, “The Blindcast.” In the podcast, the two talk about all things in modern dating and invite their first dates to be guests on the show.

When it comes to looking for your next special someone or the someone who definitely is not special, Madison Freeland and Colleen Bruton have something to say. In their dating podcast, “The Blindcast,” they bring first dates on to the show as guests.

While both of these University graduates have set out to mold their lives in impressive and creative styles, simplicities of life like using dating apps remain the same. In fact, the idea for this podcast occurred to Bruton right out of college.

Freeland graduated from the University in May with a BFA in Acting. She lives in Chicago’s Boystown neighborhood with Bruton. When not acting, she works in the fitness industry and as a photographer. She also does stunt work.

Colleen also graduated from the University this past Spring with a BMA in Lyric Theatre.

Her “survival job” is working at a wine-tasting bar in the city. She also frequently auditions and was most recently on a TV show on Showtime called “Work in Progress.”

“Right after we moved, Colleen called me into her room at 9 a.m.,” Freeland said. “We had just moved, so we had zero friends and just started our ‘survival (meaning non-performance) jobs.’”

According to Freeland, Bruton was the one who presented the idea of creating their own content through either a YouTube channel or a podcast.

“We laid in her bed, blasted music and came up with the idea of starting a podcast,” Freeland said.

“With moving to Chicago, there was so much changing and not a ton of time to audition, but I wanted to be creating something,” Bruton said. “I knew Madison was probably feeling the same way, so instead of complaining about it, I called her into my room for our first meeting and told her we weren’t leaving until we came up with an idea for a podcast.”

Freeland explained how she was a frequent user of dating apps at the time. She recalled her idea, saying it “seemed equal parts chaotic and insightful.”

With time, these two aspiring artists had a concrete idea for what their motivations behind such a podcast were.

“I wanted to create a space to talk about (dating) and to be honest and real about it,” Bruton said. “So I would say one of my main goals was authenticity in talking about dating and the many different ways it is being approached today.”

“I will say that women need to have a louder voice in relationships, sex and the internet, ” Freeland said. “I love comedy, so I knew I wanted the vibe of the podcast to be funny and casual. I also wanted to have a strong platform where dating apps’ reputations can improve. The internet dominates everything now.”

Hence, balancing both of their ideas, they came up with the best version of their goals in the form of “The Blindcast.”

Something Freeland brings up in the first episode that links to her goals is the stigma sometimes associated with dating apps.

“A lot of the apps have reputations: Tinder for hookups, Hinge for relationships …. (it) comes down to how the apps brand themselves,” she said.

“I know people who have met their significant other on the apps, but have lied to their family about how they’ve met,” Bruton said. “That doesn’t make any sense to me, because the relationship isn’t any less legitimate just because you’ve met over an app.”

That being said, there are always two sides to a coin. They talked about how while dating apps have a certain convenience factor, there may be some drawbacks and added pressures of meeting someone you have only seen in pictures.

“They are both equally confusing and cool,” Freeland said. “I think I have more respect for dating apps, because (they have) connected us with some very cool guys. It also restored my faith in humanity. Strangers trust us and want to get together to create some interesting, sexy, weird content.”

“Before hosting this podcast, I never used dating apps,” Bruton said. “Meeting these guys has been so fun, and seeing how genuinely cool and kind they are is heartwarming.”

Since both Bruton and Freeland have different experiences, their natural dynamic proves to be enjoyable to listen to.

“I would say that because I generally take the back seat on talking, I am able to fully process what the guests are saying and get them to be able to dive even deeper into some of what they are sharing on the show, whether it gets included in the episode or not,” Bruton said.

Allie Wessel, former BFA Theatre undergraduate at the University, is a close friend of Bruton and Freeland and a podcast guest.

“Madison and Colleen are personable, funny, but still kind and down to earth, and I think that reads very well over the podcast,” Wessel said.

“I think it’s the most genuine podcast created by women in their 20s right now, and I’m not just saying that because they’re my roommates,” Vallance said. “Both Colleen and Madison have started this podcast from the ground up and I really think that goes to show how dedicated they are to the success of this podcast.”

“They are creating their own work, which, as an artist, can be so scary but so rewarding,” Wessel said.

Editors note: In the Feb. 17 edition of The Daily Illini, Colleen Bruton’s last name was mispelled on multiple instances as “Brunton.” The Daily Illini deeply regrets this error.