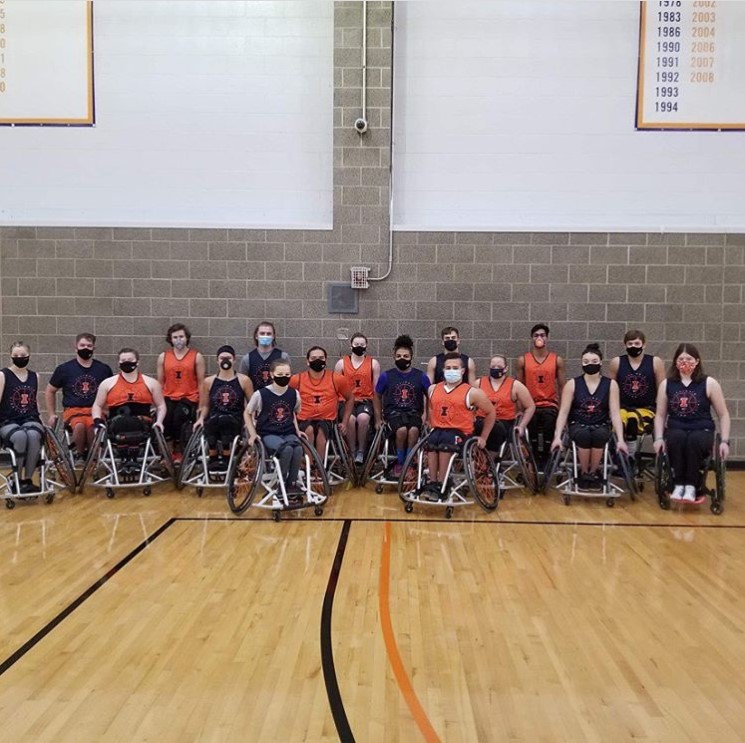 The Illinois wheelchair basketball teams pose for a group photo. The program recently received a grant of $1.5 million to redesign their wheelchairs.

The wheelchair basketball teams have always had a special place in the University’s heart. Defining excellence, inspiration and glorious wins, watching the team adds to students’ Illini pride. Now more optimistic changes are on their way to revolutionizing the sport. Coach Adam Bleakney and three graduate students have together secured a $1.5 million grant to redesign their wheelchairs.

The new wheelchairs are set to modernize their present versions, thus bringing greater mobility to players. Bleakney, head coach of the Universities Wheelchair Track team, detailed how the idea for the project came about. It all started in 2018 when Toyota sponsored a contest called the Toyota Mobility Unlimited Challenge.

The contest welcomed  “innovators from around the world to develop technology to enhance mobility for individuals with a physical disability,” Bleakney said.

The prize money for this contest was $1.5 million. The former director of the Disability Resources and Educational Services Pat Malik and Bleakney brought together an interdisciplinary team early that year.  Together they created PURE.

“Out of more than 80 submissions, PURE made it into the top 10 but wasn’t selected as a top 5 finalist. The team was passionate about the concept of PURE and determined to look for other sources of funding to continue the project,” Bleakney said.

Yu Chen, second year doctoral student, is one of the graduate students involved in the project.

“The Human Dynamic and Control Lab (HDCL) and (DRES) joined their effort in this challenge and gave birth to the idea of MiaPURE,” Chen said. “A sizable survey was conducted to identify the needs of regular wheelchair users, and based on the survey’s result, a low-profile, compact, and omnidirectional mobility device checks most of the boxes. Later on, we extended the concept and shaped it into the form of this NSF proposal.”

The new wheelchair design includes a number of exciting new features. PURE is expected to provide hand-free mobility for those who are mobility impaired. This self-balancing wheelchair distinguishes itself from traditional models by replacing wheels with a single ball on which the user can balance.

“The NSF proposal of this project focuses on three aspects: The human-machine interface, the robot dynamic control and the robot’s semi-autonomous behaviors,” Chen said.

This massive project will have lasting impacts across the board, instilling hope and inspiration in the minds of Bleakney and his team. But also in the form of a valuable experience for the graduate students.

Seung Yun (Leo) Song, doctoral student, is researching human-robot interface design for this project. He highlighted the significance of this project on his future work as a graduate student.

“It will give me a chance to explore various ways humans interact with vehicles or robots. I truly believe the role of robots will grow exponentially in the next decade as the technology improves. I hope that I can use the experience I get from this project to develop various types of human-robot interfaces. For example, semi-autonomous cars rely on reading what the drivers want or are doing, and understanding the human’s intention is my research goal,” Yun said.

Chen shared his sentiments on the matter as well.

“Humans will soon enter an era in which humans and intelligent robots will be co-existing and sharing living space. I believe MiaPURE will give us some insights on how these two decision-makers, humans and robots, can adapt to each other and make good use of each other’s strengths (the high-level experience and knowledge of a human agent and the fast yet precise control ability of a robot agent). The outcome of this project will push and inspire me and many other researchers to continue the work in this field,” Chen said.

The third graduate student involved in this project is Chenzhang Xiao. He explained the further applications their project could have.

The future certainly seems bright, with innovative ideas gushing with hope. Bleakney said, “A prominent initiative in which we’re in the early stages is creating the Center for Movement & Performance, a facility that will allow us to enhance the legacy of the DRES program, extending our tradition of research, education, outreach, innovation, and performance.”

“The advantage of being a dynamically stable platform will allow the robot to succeed in many indoor applications, which average Americans spend 93% of their life with. MiaPURE can be transformed to be caregiver robot, telemedicine, and teleservice robot,” Chen said.