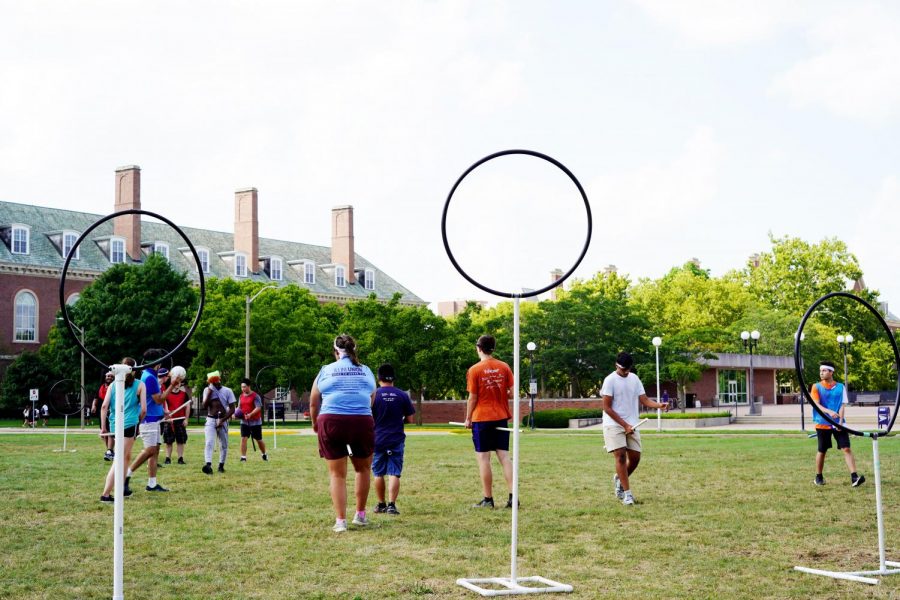 People play Quidditch on the South Quad. The group play together as a community that bonds over Harry Potter.

The afternoon sun beats down on the South Quad, where six black rings – three at each end of a coned-off area – stand vertically on the top of white PVC pipes, all at varying heights.

Students run around in the area between the rings wearing scrimmage jerseys with a PVC pipe in between their legs. The pipes are white and other colors, coded to show signs of use.

Four different balls can be spotted on the field at a time, being kicked on the ground, thrown at someone or flying through one of the black rings. Occasionally, there’s people wrestling on the ground.

This is the game of Quidditch, the sport in the popular Harry Potter books and films that involves flying broomsticks and various balls flying around the Quidditch pitch.

But without flying broomsticks, players have to do what they can with PVC pipes and colored dodgeballs.

“It’s a mess, but it’s a beautiful mess,” said William Roscher, senior in Engineering and team coach of the Illini Ridgebacks Quidditch Team.

Roscher describes Quidditch as a mix of basketball, rugby, dodgeball and wrestling, where players known as chasers can score using a deflated volleyball called a Quaffle. There’s also two beaters that use dodgeballs to knock out opponents. Each team of seven also has one seeker whose job is to catch the Golden Snitch, another player dressed in yellow.

John Crispo, senior in Engineering and the team’s treasurer, is a beater who says he was looking for an activity to keep him active but sports like football or baseball have too many pauses during a game.

“With Quidditch, it’s a bit more pedal to the metal,” Crispo said. “Like you’re always doing something. I joined it because it really did seem interesting and it is very interesting to play.”

It’s also highly competitive, Crispo said. Illini Ridgebacks is overseen by U.S. Quidditch, along with over one hundred college teams that compete in regional, state and national tournaments.

There’s also Major League Quidditch, the highest level of competition that’s made up of city teams, which Crispo and Catherine Rogers, senior in Engineering, played in over the summer.

“(Major League Quidditch) is interesting because you’re bringing all of the older club players that are no longer on college teams, introducing new talent, mixing things up,” Crispo said.

Along with being a unique way to stay active, players said the best part is the community that forms from playing and traveling together.

“You sort of become like a family,” Rogers said.

Hannah Wishnew, junior in Engineering and president of the Illini Ridgebacks, said it’s especially great to interact with the team after a year of online strategy sessions and minimal practices due to COVID-19.

“It’s more of a sense of community now than it was when you were practicing last year,” Wishnew said.

Crispo lives with five other teammates at a house they call Quid Mansion and said he’s made a majority of his non-Engineering friends through Illini Ridgebacks.

While Quidditch originated in the Harry Potter book series, some current players said the series isn’t why they joined the team.

Roscher said he has never interacted with anything Harry Potter related except for the Illini Ridgebacks but tried out Quidditch in his freshman year to spite a friend and hasn’t regretted it since.

“I stuck around because the sport was so cool, it’s so unique and like you can develop new stuff and it’s a very active sport,” Roscher said.

Wishnew also said it’s important for people to understand that Quidditch is a gender-inclusive sport and the sport as a whole is pretty separate from the world of Harry Potter.

She said U.S. Quidditch has distanced themselves from Harry Potter and J.K. Rowling after a series of comments and her new book that many have denounced as transphobic.

“We’ve kind of come up with our own rules to kind of make ourselves into a distinct sport,” Wishnew said. “Gender inclusivity and just diversity in general is very much present in sport and our recruitment processes.”

U.S. Quidditch teams employ a gender maximum rule, meaning that no more than four players per team who identify as the same gender can be on the pitch at a time, according to their website. The rule is also written in a way that doesn’t exclude those who don’t identify within the gender binary.

The players also said there’s misconceptions about Quidditch being a type of role play, Roscher said.

“A misconception that I had at first was that it’s just a bunch of nerds running around on broomsticks,” he said. “Don’t get me wrong, some of us are and some of us aren’t. But it’s all about the fact that it is a sport. It’s a full contact, competitive sport.”

And Crispo said he understands how some people could see it as a “nerdy” thing.

“Obviously you have to be pretty nerdy to put a piece of PVC between your legs and call it a broom or whatever,” he said. “But I think if you get past that, there is a lot of room for an interesting sport.”

And beyond that, Crispo said it’s about the community he’s found in this sport as well.

“I just very much enjoy the interesting collection of people that it brings together,” Crispo said.