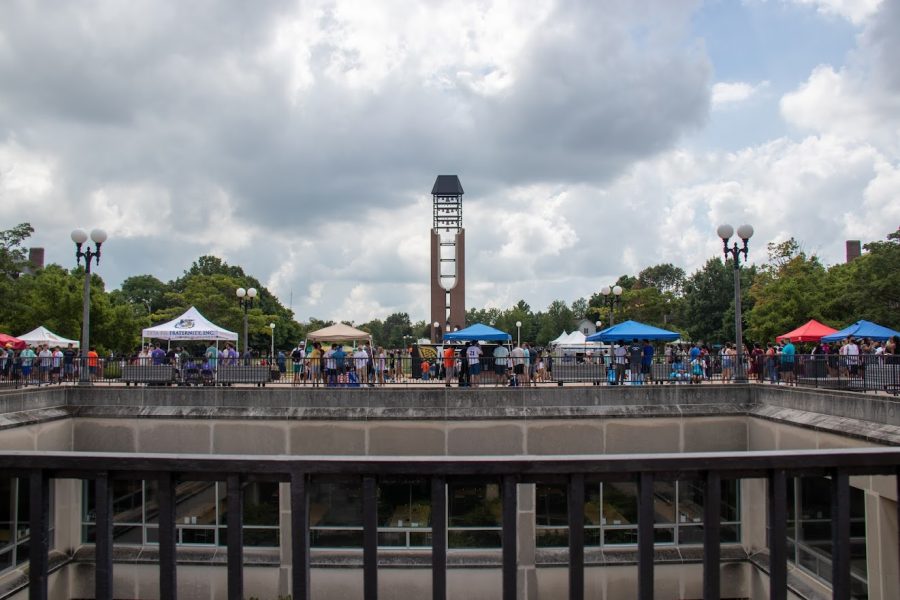 A look of the South Quad from the top of the undergraduate library. Many students are still learning about the library being shut down for renovations in Fall of 2022 and students are conflicted.

Since the University announced its plan for the library renovation project in spring 2021, the closure of the Undergraduate Library has faced great criticism and disapproval from students. While the library was initially planned to close in January 2022, this has recently been delayed to fall 2022 as architectural plans and town hall meetings will be held regarding the project.

The news of this project has been public since spring, but many students are still finding out about the plan.

“Well yesterday was the first time I’ve heard about UGL closing, so I’m still a little heated about it,” said Austin Shwatal, sophomore in LAS. “It’s pretty frustrating to hear that one of the places you’ve been to the most is going to be shut down right as you were getting comfortable there.”

Freshmen and sophomores who have only had access to libraries, without booking an appointment, since COVID-19 find the news of the plan to interfere with their future plans for using the study space that is provided.

“I find it hard to concentrate when studying for exams, and that was going to be my new go-to place,” said Maddie Fenili, freshman in ACES. “I love the atmosphere and the selection of different books and games they have. I planned on studying there more than the ACES library, even though that library is closer to my dorm.”

Shwatal said that since COVID-19 began, students have found it challenging to study in environments such as their dorms or bedrooms and enjoy the change in the scenery libraries bring.

“As a sophomore, my freshman year was certainly quite the unique experience, and I know it was challenging for everyone,” Shwatal said “As I alluded to before, one of the biggest challenges for me was trying to study, work, sleep, eat and relax in the same tiny room all day, and I probably was a lot less productive than if I had the chance to just hang out at UGL or another library for a few hours.”

The major question being raised among students upon the announcement has been the purpose of turning UGL into the home of Rare Books and Manuscripts Library when the money being allocated could have gone to another building to store these works.

Given UGL’s history of flooding, many students question the motives for the University’s decision and reasoning for the conversion.

“I don’t understand why the University doesn’t build a separate building for their archive’s unit, especially one that isn’t underground in a building that has flooded before,” said Kay Tetlak, UGL assistant.

Tetkak said it felt like the library is prioritizing the needs of a niche group rather than the needs of the majority of their patrons.  According to Tetlak, it just doesn’t make sense to displace patrons when the archives are already being housed.

While students can acknowledge they will not be able to overturn the decision and must accept the fate of the UGL, the reasoning and transparency of the decision have been a point of contention for students.

“If a faculty-led resolution can’t go anywhere, then I suppose I’ll get over it,” Shwatal said. “I’m not one to judge exactly how the money should be spent, but again I think it would be possible to at least try to find and/or construct an alternate location that would have all the amenities for preserving these archives.”

Until the project and conversion begins, students will still be able to use the UGL for the remainder of the 2021-2022 school year. As discussion and town hall meetings commence, the decision made is likely concrete.

“I think that the fact that money is being allocated to the library alone is fantastic,” Tetlak said. “However, I do wish that the priorities of this project were flipped. Instead of prioritizing spending a bunch of money on an archives unit that serves a very niche population, they should focus on creating a new space for patrons to study in and rent technology from.”