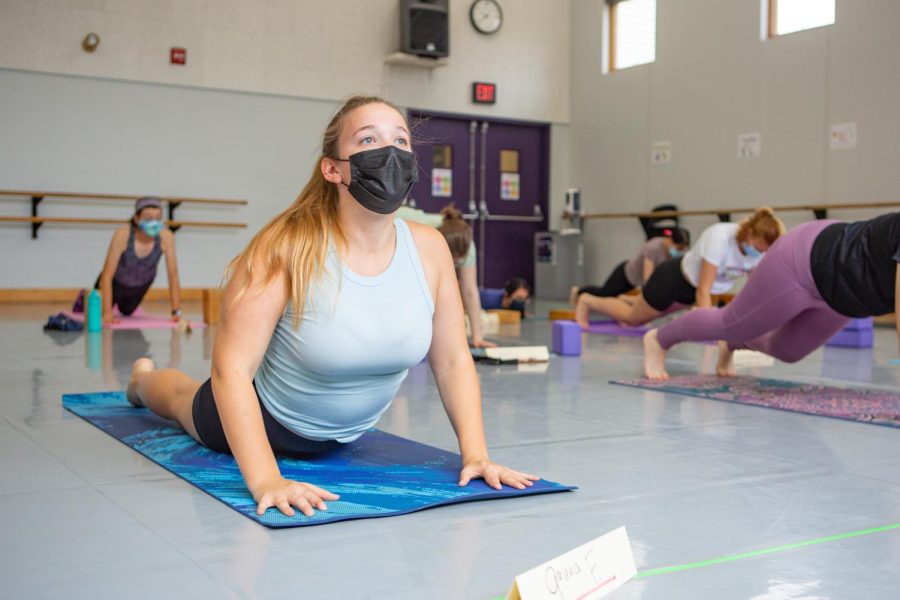 A spiritual practice spanning thousands of years is happening all around us. The setting: studios, fitness centers, homes or even outdoors. It’s a physical and mindful practice: It’s yoga.

Many people have gone to a yoga class or watched an online yoga video. Many say it’s become commonplace all around the world. However, some professors said the spread of yoga has brought about its cultural appropriation.

Jan Erkert, professor and head of the department of dance at the University, said yoga has strayed away from its original purpose.

“A dominant culture took the work from a spiritual practice in India and the thing that is problematic is the idea that it took it and turned in into a workout routine,” Erkert said. “The idea that a traditionally spiritual practice has become a fitness routine to improve physical looks for many seems to take away from the true value and meaning of the practice.”

Christopher Callahan, teaching assistant professor and scholar of Japanese religions and Buddhism at the University, agreed and said yoga is a practice that is meaningful for many Eastern Asian religions .

When considering the original goals of these religions and yoga, Callahan said the movements and feelings of yoga take more importance than the religious motivations behind them.

He said there is a tendency for people to modify yoga and make it their own by doing whatever they feel suits them best. However, he said this contradicts the original intention for many cultures and changes specific yoga poses that have been done a certain way.

Erkert said the spread of yoga is most likely unavoidable, but when looked at more closely, has a variety of benefits for different kinds of people. She said yoga is a powerful practice with the potential to transform not only bodies, but also lives.

Michelle Liang, junior in Engineering, has practiced yoga for both fitness and relaxation purposes. She said yoga specifically differs from other physical practices and sports she’s partake in.

“I think that the way they get you to do different exercises, it’s a lot more about smaller movements and focusing on being mindful,” Liang said.

Many said yoga is unique for the incorporation of mindfulness into the physical activity for personal benefit.

Liang said yoga has helped her become more relaxed — something she said could be of value to many of students with busy and stressful schedules.

Erkert said people need to understand how to respect yoga’s spiritual origins and work to avoid appropriation. As a white woman teaching yoga, Erkert said she strives to be extra respectful and mindful of the cultural practice.

“I feel as a dance practitioner, this awareness of how different cultures impact the way we move is really important,” Erkert said.

Erkert said it is important to acknowledge that yoga’s origins are religious and that through its spread, it has been culturally appropriated.

Erkert also said there is a lack of diversity of yoga teachers in the United States. She said her department is planning a national search for a professor with a background in health and wellness in order to diversify.

“(There) will be a national search where we can really seek out to diversify our whole faculty in general, but especially in the field of yoga,” Erkert said.

However, Erkert said the future of yoga in our country and community looks bright.

“The work is slow, but I think it’s steady if you really work at that,” Erkert said. “Our community is a very different community now than it was 10 or 15 years ago because we’ve really actively worked to diversify both our faculty, students, etc. and so that’s brought great richness to our community so it’s a journey that we continue to commit to.”