Humans of CU: An artists’ thank you 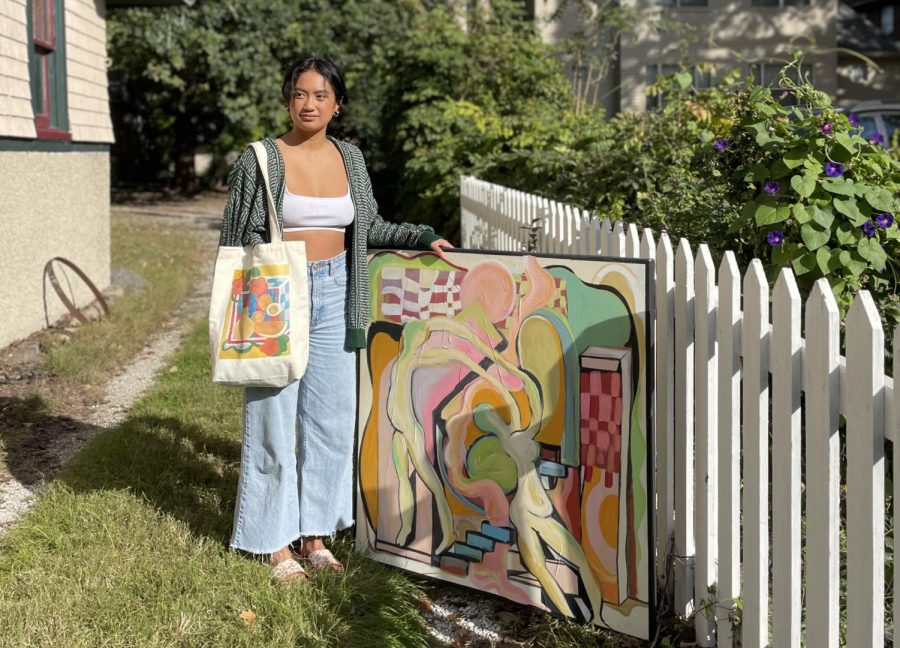 Gianne Garcia, University student and owner of Tidy Totes, holds one of her handmade tote bags while standing next to a painting she created. Garcia is thankful for the amount of support she’s received for her small business.

Gianne Garcia is a senior at the University of Illinois at Urbana-Champaign who is studying to be a nurse. She is also a woman of color trying to find her identity in the world of art. Her medium? Her small business: Tidy Totes.

Ever since she was a kid, Gianne said she described herself as always feeling the most. She said she was sensitive to her surroundings, and art was the perfect form of expression.

“Ever since I was like really young, my room was always just a mess with like colored pencils and markers,” Garcia said. “I would draw on my furniture and cut curtains into different shapes. And my parents literally called me like a demon child.”

Garcia said that as reflected, she realized this was her early zeal to express herself.

Garcia said everyone from her kindergarten teacher to her art teacher growing up and even her parents were supportive of her artistic talents.

As a first generation American, Garcia had to experience first hand the weight of what her education meant to her family and would mean to her.

“My parents always wanted me to excel with academics,” Garcia said. “I worked really hard in school, which took a lot of time. And it makes sense because my parents couldn’t study art and then come to America.”

Garcia said her parents set an example early on of what it means to work hard. However, her grandfather’s work ethic stands out.

“(My grandfather) is an amazing artist,” Garcia said. “Everyone on my mom’s side has an artistic side, but they also decided to do something a little more realistic for their family. It’s beautiful too because it’s like how I have all these opportunities. I feel privileged in a sense.”

Garcia said her grandfather is someone who came from nothing and made something of himself for his family. Through his perseverance, he stayed true to himself and his values.

“I have a tattoo that says ‘Thank you’ in Tagalog because that’s all I have to say to my family,” Garcia said. “I’m so grateful.”

Garcia’s friends said she has many talents that extend beyond being an artist. They said they admire her for not only being a nursing student that runs a small business but for holding events and supporting her fellow small business owners in the Urbana community.

Riley Toennies, senior in LAS, was one of Garcia’s first friends to model her tote bags for Instagram. Toennies said she admires her positivity.

“I mean she does it gracefully,” Toennies said. “She makes it look glamorous and amazing because she is. Yeah, I think about that a lot, I wonder how she juggles all of it. But I know it’s just because she is capable and she’s smart and she’s determined.”

Through a lot of reading, listening to podcasts and reflecting, Garcia said managing her mental health is her best secret. She said if she can’t be her best self, then she can’t present that to others.

Anna Pevey, senior in Media, initially sought Garcia out to include her in a piece about local artists in the Collective Magazine. Soon after, the two became good friends.

“Her openness about mental health and being transparent as a business owner feels so real and authentic,” Pevey said. “Gianne is an individual who has her own thoughts and feelings, and it really shows in how she creates her art and the way she has chosen to use her ability and platform.”

“I only started calling myself an artist a month ago,” Garcia said. “Which is so funny because I thought I needed to fill these — like I thought once I had this skill I could be called an artist.”

After graduation, Garcia plans to move to the West Coast. She said she optimistically awaits the many curious adventures her future holds in store for her and her artist within.

Manuella Luca, senior in AHS, said she and Garcia came up with an idea to bring local artists of color together and promote their work in a series of events called Paint and Groove.

“Literally, we’re sitting on my floor, drinking tea and talking about community and bringing people together,” Luca said. “Creating more safe spaces for people of color where we feel not only welcome but celebrated.”