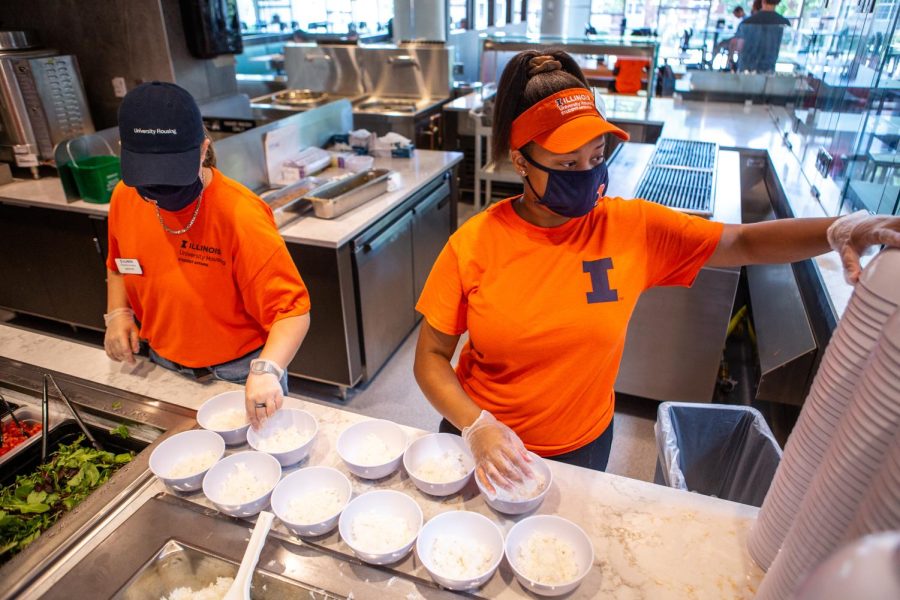 Two dining hall employees pack bowls of rice at the ISR dining hall on Aug. 27. The University is struggling to keep people employed because of the student labor shortage.

When Colette Pinkowski, junior in FAA, walked into the Ikenberry Dining Center one evening, she noticed that the plastic china, cups and metal silverware were replaced with paper and plastic alternatives.

“I was surprised,” Pinkowski said. “It was out of the ordinary.”

Some students excused the use of such alternatives by assuming the dishwasher was broken. However, as time went on, and paper and plastic products were still in use, Colette and other Ikenberry residents began to understand: It was the labor shortage.

“I quickly realized why, and it sort of made me think about how bad the shortage of workers is,” Pinkowski said. “They can’t even wash the plates.”

The United States economy is currently undergoing the worst labor shortage in history. According to an article by the Wall Street Journal, labor force participation is still 1.7% lower than in February 2020 despite 10 million job openings.

The University is no stranger to the effects of the labor shortage.

“We are seeing a drop in student employment compared to two years ago,” Trame said.

Trame also said that since University Housing and Dining hires the most employees, they have been the most affected by the shortage.

“The impact of the workforce that is being felt globally is very much being felt in University Housing,” Curry said. “We’re feeling staffing issues across our entire operation.”

Mindy Leek, sophomore in LAS, works at the Ikenberry Dining Center and said the shortage has made her job difficult.

She also explained that the use of disposable china is sometimes due to malfunctioning equipment.

“But most of the time, it’s because we don’t have enough staff members,”  Leek said.

The integration of disposable china into Ikenberry Dining Center is just a small portion of the effects. The Caffeinator in the Ikenberry Commons and the Florida Avenue Residence dining hall have been temporarily closed.

Bailey Speer, freshman in LAS, said she is not eating dinner because the FAR dining hall is closed.

“I normally don’t leave my dorm until it’s too late to eat anywhere else besides FAR,” Speer said. “I would like them to reopen so I could get the late-night dinner.”

According to Curry, the decision to close FAR and The Caffeinator came down to low student usage and the need to staff higher student-concentrated locations. She also discussed how certain people are hired in only designated classifications and employees are often borrowed from one location to work in a short-staffed classification to another.

“For example, there’s only certain people that can work in the dish room,” Curry said. “Sometimes we have to borrow from one area to another in the same job classification so we could provide a better experience. It was better to consolidate to fewer locations and then focus on the experience in the remaining locations.”

The closures won’t last. In a mass-email sent Sunday, University Housing announced they plan on reopening FAR dining hall and The Caffeinator in the upcoming spring semester. However, the Wall Street Journal reports that many economists expect the labor shortage to last years.

Trame and Curry reflected on the shortage’s continuation and what the University could do to hire more employees.

Trame said she believes that federal government emergency grants given to students have alleviated some of the costs needed to supplement their livelihoods that otherwise would’ve been earned through student employment.

She also said she thinks students are getting acclimated to being back on campus and may not want to work right away.

Trame hopes that the coming increase in minimum wage will encourage more students to work.

Curry believes the labor shortages may have been magnified by COVID-19.

“There are folks that are changing how, where and when they work,” Curry said. “There are people who used to work in the restaurant and food service industry who have decided to do something different.

“Our vendor has issues too. They’re trying to fill all their truck driving and delivery positions and this impacts when we get our products.”

She also mentioned that the hiring process for dining is extensive and it often takes a long time before students are hired.

“We’ve been working really closely with the HR department to expedite hiring wherever we can, so it doesn’t take so long,” Curry said.

Curry and University Housing plan to investigate why students are or are not choosing to work with them and why they’re quitting.

Regarding wage, Curry said University Housing is trying to make sure that they provide a competitive wage as the minimum wage continues to rise.

“We are always looking to improve,” Curry said. “We’re working to provide developmental opportunities for staff once they work with us. We want to know how we can support and take care of them so that they want to stay. We’re constantly looking at ways in which we can do that better.”