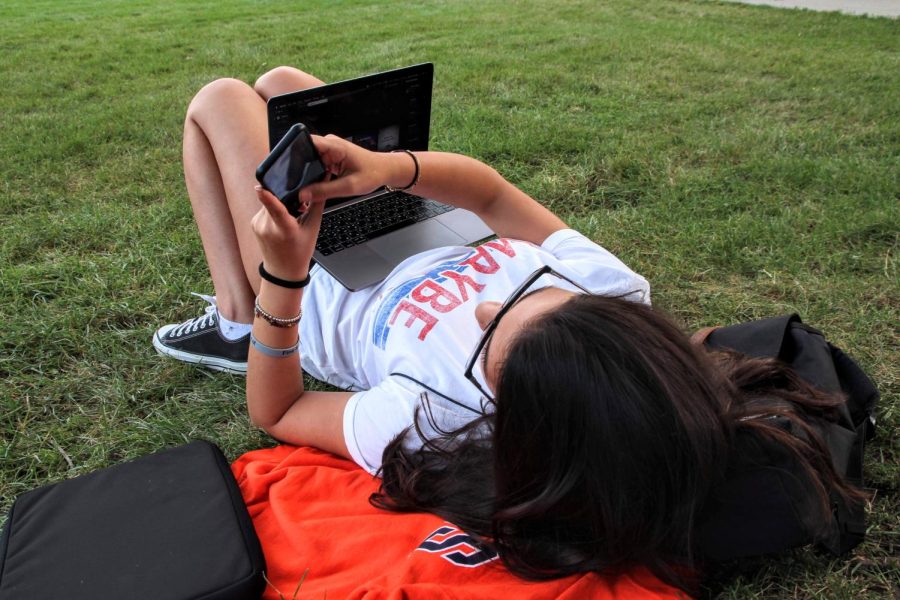 Sadeen AlHalabi, student in FAA, uses her phone on the Main Quad on Sept. 3, 2019. Optometrist Dr. Amber Cumings says that too much screen time strains your eyes health.

The first thing the average student does in the morning is turn off their alarm, and that is only just the beginning of their exposure to screens for the day. From doing work for class on laptops to checking social media on phones to leaving the TV on while making a meal, screens are a prevalent part modern daily life.

While there is a range in screen time usage per person, optometrist Dr. Amber Cumings estimates that adults are on screens from eight to 10 hours a day and potentially more than that. Teenagers are typically on their screens for about eight hours and grade-school children range from two to three hours, Cumings estimates.

“Screens play a bigger role in our lives than I would like them to be,” Cumings said. “School and work have turned to technology to present information. While the amount of paperwork has decreased considerably, that means we spend an inordinate amount of time staring at screens.”

Taylor Jones, sophomore in Engineering, has felt the impact of screens in her life at college because of her major. Jones spends between nine to 10 hours a day using a screen on average.

“It is horrifying,” Jones said. “It is hard because you try to limit the ways you can because you know how bad it can be, but at same time, it can make your life so much easier.”

Similar to the experiences of many college students, the majority of Jones’ assignments and labs are either done completely online or at least have components that require using a device. Compared to high school classes, Jones said that all of her classes rely on her having a device. Without having a laptop readily available, it is difficult to complete work for class.

“When my computer broke last year, I had a panic attack,” Jones said. “There was no way to repair it in a short period of time, and I was told I would have to be without it for a week before finals. I was lucky because I had an external monitor, but it really made me realize how reliant I was on (technology), primary for school.”

Beckett Green, freshman in FAA, estimates that he uses screens for roughly 16 hours each week. As a studio art major, he spends much of his screen time working on both class and personal projects.

Screens are a part of the average student’s life and will be from now on, but a rising concern is the impact screens have on vision and overall health. Screen time that exceeds the six to eight hours a day range has shown to cause a reduction in visual performance and function, Cumings said.

“I’ve seen children as young as a few months old being exposed to phones and tablets, and I know for a fact nearly all adults are using screens during the day,” Cumings said. “I would say that even though I’ve only been in practice for three years, I’ve seen a huge increase in screen time and a subsequent decrease in functional visual systems.”

Jones, who has 20/20 vision, has recently been prescribed glasses because of issues with the muscles in her eyes due to concentration and strain from looking at her screen.

“I’ve never had vision problems throughout my entire life,” Jones said. “But recently, I was looking at a microscope and realized I was seeing double. I went to the optometrist, and even though I have 20/20 vision, the muscles in my eye have become so fatigued to the point that I cannot focus very well. I can only see this as getting worse.”

Green, who spends considerably less time on screens compared to Jones, has noted the physical side effects screen use has had on his vision. However, given the prevalence screens have had on his life, he has become used to the impact.

“I do feel the physical effects of being in front of a screen, but for better or worse, having to do high school online either wore that away, or numbed it,” Green said.

While it is difficult to limit screen time, Cumings notes that taking one-to-two-minute screen breaks every 20 to 30 minutes can be beneficial. Additionally, using blue light glasses has shown to aid in retinal health and some fatigue issues.

“I would recommend blue light glasses any time you are looking at a screen, including phones,” Cumings said. “If we continue to look at screens unprotected for decades, our eyes will likely show damage.”

Jones said screens will remain a fixed part of the future.

“The biggest solution is making sure they don’t become so integrated in our lives, so that our entire lives are not on a screen,” Jones said.