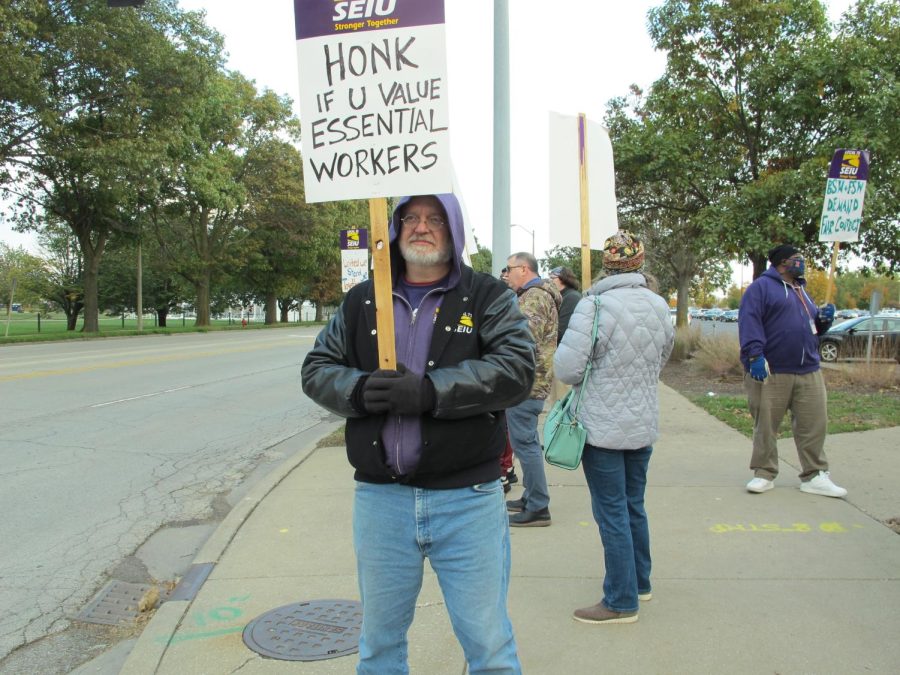 A man protests the University’s lack of response to their complaints about pay discrepancies and lack of respect for service workers on Wednesday. The local chapter of the Service Employees International Union will not rest until their needs are met.

According to Adrien Rojas, a spokesperson for the SEIU, the University is required to meet for negotiations within 30 days of the request being filed.

Workers have been requesting negotiations since mid-September and a meeting has only been scheduled tentatively for Nov. 18, Rojas said.

“It’s been two months and they did let us know when I first sent them the demand for a bargain on September the 14,” said Richard Baldwin,  SEIU senior organizer. “They responded with ‘We received that,’ and then a month later they told us the Fire Service Institute. . .is not available and we can meet somewhere else. And then silence again.”

The Fire Service Institute is where SEIU usually meets with the University.

Rojas noted that the meeting is scheduled right before winter break, “which is unfortunate,” and hopes that any momentum SEIU receives “doesn’t get squandered.”

Hundreds of workers have not been getting paid at the rate that the union and the University have agreed to and have instead been paid at a lower rate.

“There’s hundreds of people now who are not getting paid the correct rate,” Baldwin said. “And it’s been going on for months and we keep bringing it up, and they say ‘Yeah, we’ll fix it’ but they don’t get it fixed. It’s not that they’re refusing, but it’s frustrating. I have to show up to work and do my job and be held to an appropriate standard. How are you not able to just pay me the correct rate?”

According to Robin Kaler, associate vice chancellor for Public Affairs, the University is aware of the pay rate issue and is working to fix it.

“SEIU alerted us earlier this year that almost 200 employees were not receiving a shift differential they were supposed to be paid,” Kaler said in an email. “We have been working with the Office of Business and Financial Services to calculate and distribute back pay and to ensure the differential is paid correctly going forward.

The University also recently did away with pandemic-related quarantine pay for its workers because of the University’s vaccination requirements and also because “vaccinated individuals are no longer required by public health guidance to quarantine when they are exposed to COVID-19,” according to Kaler.

Additionally, service workers are treated with a lack of respect from their employers on top of being underpaid and are being ridiculed even when the work that they are doing is good, Baldwin said.

Baldwin knows first-hand what service workers have to endure. Working in the dorms and dining halls can be a taxing job and that is not recognized enough by the University, he said.

“Most people don’t understand what some of these folks have to deal with at work,” Baldwin said. “They will walk into a bathroom to clean it, and they will have smeared feces all over the wall or written things in blood on the mirror.”

“There is a lot of constant harassment from people over little things, and then they just let huge things go,” Baldwin said.

Many service workers want the University to acknowledge the work that they are doing and to compensate them accordingly, according to Rojas.

“They put their all into it and are called heroes by the University, and they are not treated necessarily so,” Rojas said.