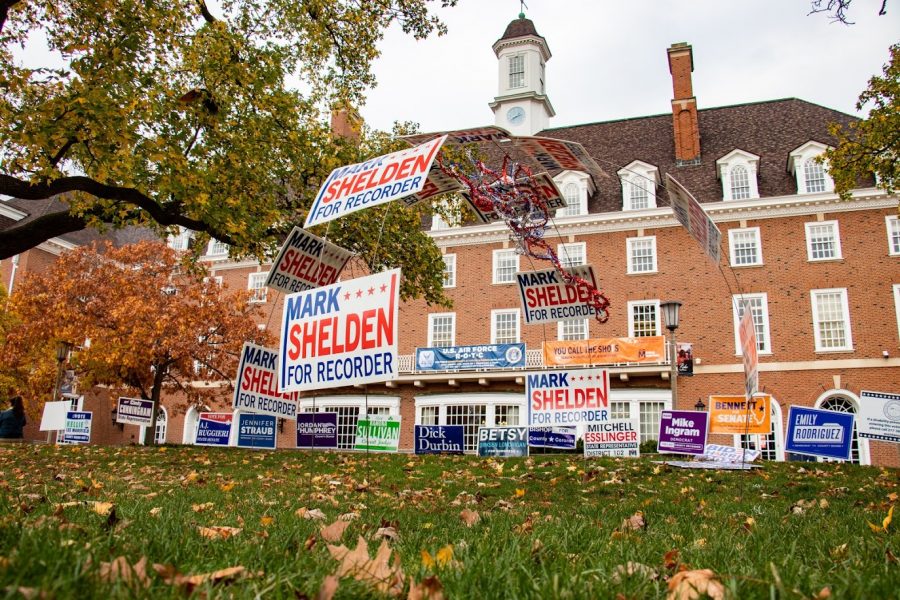 Lawn signs line the grass of the Main Quad outside of the Illini Union voting site on Thursday. Many important state positions are up for grabs in the 2020 Illinois election.

With Election Day on the horizon, the presidential election between Donald Trump and Joe Biden is practically unavoidable. Wherever you turn, there’s a political ad for one of the two candidates or reports about a new development in their campaigns plastered on your social media feed. At times, it may seem like the presidential election is the only thing at stake on Nov. 3.

However, nearly 200 state and local elections will occur across Illinois. A third of the State Senate, the whole of the State House and three State Supreme Court judges are up for election this November. While Illinois reliably votes Democrat in presidential elections (Biden is up by nearly 20 points in the most recent polls, according to fivethirtyeight.com) the results of down-ballot elections such as the State Senate and State House of Representatives will give a vital insight into the true demographics of our state.

Jacob Baron, junior in LAS, spends much of his time thinking about politics. In addition to his political science major, Baron has an internship with the Illinois Public Interest Research Group, a non-profit organization that has been encouraging voters to turn out during this election. In addition to the presidential election, Baron believes that voters should be informed on who’s running for State Legislature as well.

What happens in Springfield will arguably have more of a direct impact on University students’ lives than what happens in Washington. Tyler Swanson, sophomore in ACES and political director of the Illini Democrats, emphasizes the importance of down-ballot elections. The Daily Illini reached out to the Illini Republicans twice by email for comment on this story but received no response.

“Regardless of what happens in the Presidential Election, the national and State Senate races will be what really decides how America goes forward for these next six years,” Swanson said. “The majority for either party will be what determines what happens policy-wise.”

State Senate: Democrat stronghold, room for Republicans to fight back

Democrats hold a majority in the Illinois State Senate, and it’s not changing any time soon.

Of the 20 seats up for election in the Illinois State Senate, ten of them are uncontested elections. When an area has a solid voter base for one party or the other, like Chicago or rural southern Illinois, the minority party doesn’t run a candidate to save expenses. Since there is no opponent, these districts are locked for the political party running the sole candidate.

Of the ten uncontested elections, eight feature a Democrat candidate, while two feature a Republican candidate. With uncontested districts functioning as locks for the political party running in those districts, political analysts add the sole running candidate to the pre-election party total.

Illinois Republicans know that flipping the State Senate is a futile endeavor. Instead, they’re focusing on a different goal — eliminating the current Democrat supermajority.

One of these Democrat-held seats up for election is the 52nd congressional district, which encompasses all of Champaign-Urbana, as well as the neighboring towns of Danville and Rantoul. The 52nd Senate Seat is currently filled by Democrat Scott M. Bennett.

Bennett is a graduate of the University of Illinois Law School and has held the 52nd district’s seat since he was appointed to fill a vacancy in 2015. He won reelection in 2016 over Republican challenger Micheal P. Madigan with 61% of the vote. While Bennett is being challenged by Republican Alexander Ruggieri, the seat has not been won by a Republican since the last Illinois State Senate redistricting in 2010.

The Illinois State Legislature has been out of session since May 23, and will not reconvene until early January 2021. The next state legislative session will begin with the swearing-in of newly elected officials. Madison Jackson, a senior in LAS, serves as the Director for Governmental Affairs for Illinois Student Government. She emphasizes the importance of down-ballot elections in determining who makes up the state legislature, and how they influence important issues on a local scale.

“We should be spying attention to the legislative sessions that are coming up,” Jackson said. “In the past, there has been discourse about issues such as the ACT, and how the ACT has historically and continues to exclude certain marginalized populations from being able to get into Universities. There have been debates over incarceration issues, and they start locally.”

Twice as big but less well-known as the State Senate is the Illinois State House of Representatives.

Unlike the Federal House of Representatives, which exists to provide a more demographically representative lower chamber to our Federal legislature, the Illinois State House functions as an extension of the Senate. Each State Senate district is split into two halves according to population, creating twice as many House districts as there are Senate districts.

All 118 House districts are up for election. Representatives serve for two-year terms. This leads to the potential for a massive turnover come inauguration day, depending on how election day shapes out.

Since the entirety of the Illinois State House is up for election, there is a possibility, albeit a slim one, for Republicans to flip the House in their favor.

To take hold of a majority of the House, a party needs to occupy 60 seats. In order for Republicans to flip the House, they will need to flip 16 districts currently held by a Democrat.

There are 24 districts with a Democrat incumbent and a Republican challenger. Republicans must win at least two thirds of these races in order to assume a majority in the House. Historically, incumbents have a much higher chance of winning reelection, with 90% of Congressional House races being won by the incumbent.

In 2018, House District 54 was the closest election seen state-wide, with Republican Thomas Morrison defeating Democrat Maggie Trevor by a margin of only 43 votes. These close margins of election emphasize how important voter turnout is for either party.

Illinois House District 103, which contains the entire Champaign-Urbana community, is currently represented by Democrat Carol Ammons. Ammons, who has served as Champaign-Urbana’s State House representative since 2016, is being challenged by Libertarian Brad Bielert. While Ammons faces opposition from the third-party candidate, the 52nd District has been represented by a Democrat since Illinois’s last redistricting in 2010.

Despite the potential for a shakeup in the Illinois House, elections for state legislature still do not receive the same amount of attention as larger elections, especially during a presidential election year. Even those who are passionate about politics find themselves paying more attention to nationally-impactful elections instead of local ones.

Nataly Esparza, senior in LAS, has spent the last few days canvassing for Joe Biden in Pennsylvania. Her enthusiasm for politics and activism is on display through her dedication to attempting to turn out the votes. However, her commitment to the National campaign has resulted in less attention toward state legislature level elections.

Implications of eliminating the supermajority

To eliminate the Democrats’ supermajority, Republicans need to flip four seats, a much more likely prospect than the 16 seats needed to gain a simple majority. Both chambers must override the veto in order for the veto to be overturned.

Since Democrat J.B Pritzker was elected governor in 2018, the entire Illinois State Legislature has been Democrat-held. Because of this, there has only been one gubernatorial veto overridden since Pritzker took office in 2019.

Erasing the Democrats’ supermajority in either chamber is an important goal for Illinois Republicans. As Illinois gears up for a gubernatorial election in 2022, Republicans are sure to leverage Pritzker’s response to the COVID-19 pandemic against him in an attempt to take control of the gubernatorial seat.

If a Republican were to win the Gubernatorial election, and Republicans eliminate the Democrat supermajority in either the House or the Senate, then the governor can veto any legislation passed by a Democrat-controlled legislature without being overridden.