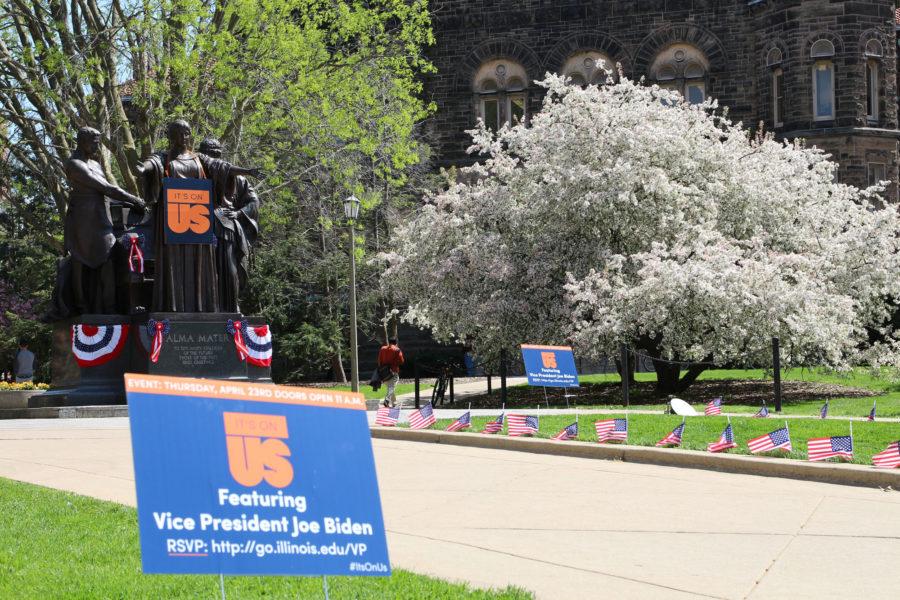 Alma Mater stands near the Main Quad wearing an It’s On Us campaign shirt.

The Illinois Student Senate will recognize the one-year anniversary of the It’s On Us campaign with the launch of a new task force on Sept. 19.

The task force will attempt to bring together students from across campus to raise awareness about sexual assault.

The goal of the task force is to build on the momentum of the campaign’s first year and to get more of the campus involved, said Matt Hill, student senate vice president-external.

By the end of the 2014-2015 school year, nearly 3,100 campus members signed the It’s On Us pledge. At the time, the University had more signed pledges than any college in the country. Hill said that reaching so many people in the first year was a huge success but the task force still has a lot of work to do on a campus of over 40,000 students.

All students interested in the task force are encouraged to apply. The ISS sent out applications through its listserv Monday, which are due by 5 p.m. Friday. The final list of members will be announced Sept. 21 and will be approved by ISS on Sept. 23.

“I think getting more people involved at the organizational level is going to be the key,” said Sarah Hochman, student senate vice president-internal.

Hill informed students about the task force application in an e-mail sent to “senators and friends” Tuesday, and encouraged all in attendance at the Wednesday senate meeting to wear an It’s On Us T-shirt. The senators will be taking a group photo and sharing it on social media to inspire students at Ohio State University, who will host Vice President Joe Biden for an It’s ON Us rally Thursday.

Biden visited the campus for a similar rally in the spring to celebrate the University’s success with the It’s On Us campaign.

Hill also hopes to encourage students to participate in a new initiative called I-Care, which is being created by the Women’s Resource Center. The initiative would be similar to the current FYCARE curriculum but would act as a follow up seminar that focuses on bystander intervention.

Correction: A previous version of this article stated the I-Care initiative is being spearheaded by the student senate. It should have stated Hill plans to encourage students to participate in the Women’s Resource Center led initiative. The Daily Illini regrets the error.