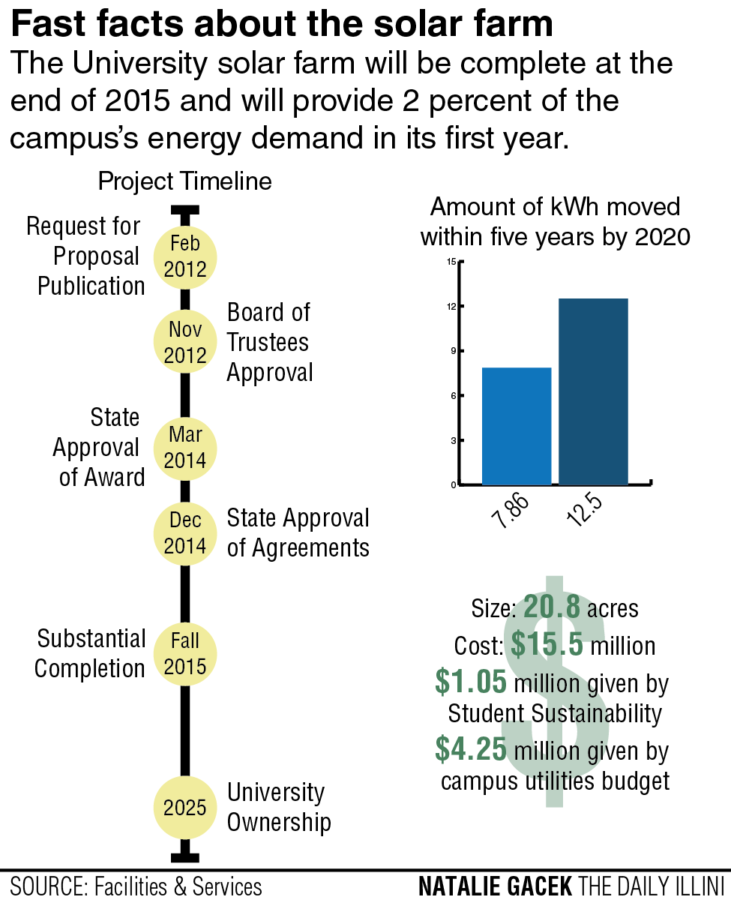 Solar power will account for two percent of the University’s energy source next year.

Construction on the 20.8 acre solar farm — located south of Windsor Road and west of First Street — began July 20 and the clean-energy project is expected to be completed by the end of 2015.

“They are actually slightly ahead of schedule right now,” said Morgan Johnston, project contact and director of sustainability at facilities and service, F&S.

The project was approved in December 2014, F&S and the UI Student Sustainability Committee (SSC) entered a power purchase agreement with Phoenix Solar LLC to complete the project.

The farm will cost roughly $15.5 million over 20 years, resulting in a $5.3 million up, front cost with $1.05 million coming from the SSC over three years and $4.25 coming from the campus utilities budget.

Phoenix Solar LLC will oversee all of the design work as well as the installation of panels, electrical grid operations and farm maintenance over a 10 year period. After the 10 years, responsibilities will be handed to F&S.

According to the U.S. Environmental Protection Agency, the solar farm will be one of the largest on-site university solar farms in the country.

“We should be very proud of the solar farm, it’s one of the largest solar energy arrays on campus in the country. The two percent is just an image of how much further we have to go,” Johnston said.

The solar farm contributes to the University’s efforts to become a more sustainable and carbon-neutral campus over the next 25 years, as outlined in the Illinois Climate Action Plan, iCAP.

“Through my past experiences, there used to be so many roadblocks for these types of technology being implemented on a campus, but the Student Sustainability Committee and the Facilities & Service department remained very active to make it happen,” said Monica Chhatwani, SSC member and F&S intern.

“It is a very important step for our campus, it represents the first major (step) of renewable energy generation,” McCall said. “So far we have had small arrangements on campus. This is really huge.”

Students can also contribute to larger efforts, such as the solar farm, through the iCAP online portal. The portal serves as an encyclopedia for students to view current sustainability projects as well as past ones. Proposals for projects can be sent through the portal until Oct. 11.

“Energy conservation and clean energy together will do the majority of making campus carbon-neutral,” Johnston said.

McCall said he and F&S are in conversations with several companies to purchase power from a wind farm within the near future.

“(The next) big step likely to occur, is the purchase of renewable energy off of campus. We don’t know exactly how much it is going to be yet, but it is moving forward,” he said. “We have received requests for proposals from wind companies, and we are now in the process of actually having to finalize an agreement.”

McCall also cited the efforts of student sustainability RSOs as a catalyst for clean energy initiatives on campus.

“What was cool about the solar farm is there were many opportunities for student input on how the project would be developed and stuff like that. It signals to the campus that there is more potential for students to get involved,” Liu said. “This isn’t something that just administrators do.”