Describing terror in the 'City of Light' 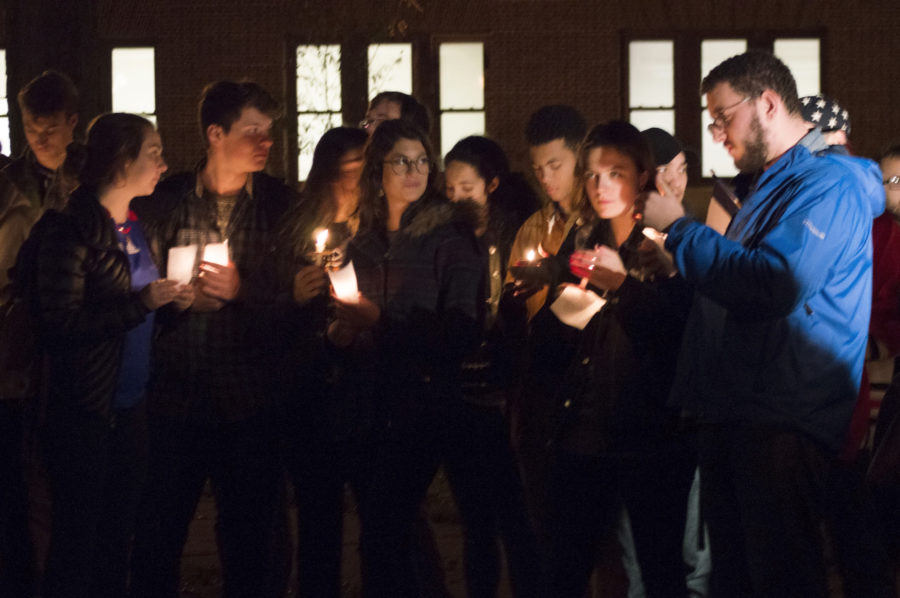 Illinois’ students gather together to commemorate the victims of the recent attacks at the Main Quad on Nov. 18. 2015.

Paris isn’t a ghost town. At least for Emilee McArdle it hasn’t been.ch

McArdle, junior in LAS, wasn’t in Paris on Friday, when a series of terrorist attacks resulted in 129 dead and hundreds more injured.

While her study abroad program is based in the city, McArdle was in Italy visiting a friend. After flying back Sunday, McArdle’s host mom drove her through the heart of the attacks in the 10th and 11th districts.

Citizens and visitors stood outside the Bataclan Theatre as they drove by. McArdle described a scene of patrons mourning, placing flowers and lighting candles to commemorate those who died in the attacks.

The “City of Light” is the temporary home for McArdle and 11 other University students studying abroad. But the University’s connections to Paris reach far beyond those students as well; 47 native French students are currently studying at the University, and the Muslim community on campus has already felt a clear impact from the attacks.

Mudassir Ali,ch president of Muslim Students Association and a junior in LAS, first saw the news of the attacks while at home. Ali said he immediately linked the attacks to the radical Islamic State, IS, and knew the attacks would cause a spur of inaccuracies and prejudices against Muslims across the U.S.

“I couldn’t believe this happened without an ounce of hesitation, condemning everything that happened,” he said. “I felt immediately, given the context, that Muslims everywhere were going to be extremely affected.”

Ali said that the issues that IS and other radical terrorist organizations have caused to the average Muslim civilian is that the organizations uses the ideals behind Islam out of context.

“Everybody in the Muslim community would agree that Islam is a message of peace,” he said.

Ali said members of the Muslim community on campus have already dealt with issues of racial tensions, including a member of the Muslim Students Association. Ali described a scene where a female board member was traveling back to campus from Lincoln Square Mall when she was was berated with Islamophobic statements.

Vincent Balletch, a French foreign exchange student studying Computer Science at the University, said one of his two brothers formerly lived near the area.

Ballet said both of his brothers were fine during the attacks, but described the idea of returning to the scene as unimaginable.

He expressed concern around Friday’s attacks and the January attacks on the offices of the French satirical magazine, “Charlie Hebdo.”

“It’s frightening. You don’t feel safe, like they couldn’t prevent this one even after the January attack,” he said. “So when will be the next time some terrorist attack happens? Will it be like when I’m going to take my plane from Boston to Chicago? Will it be when I go back to France?”

For Andrea Bordeau, assistant director for International Safety and Security, last Friday’s attacks weren’t the first time that a crisis has happened with students in a country or area in crisis. Yet, Bordeau immediately began reaching out to directors and students to verify their safety in Paris.

Bordeau, whose position is only two years old, was able to confirm the safety of all the students in Paris within an hour.

Bordeau said she works with the U.S. State Department, her counterparts at other universities and the University’s international insurance provider on determining whether or not students should be taken out of the area.

She said the international insurance provider is clued in and determines when a student evacuation is needed, which would allow students for some form of a refund. Bordeau described two classifications for whether students return home from study abroad: the University’s formal policy or a student’s personal choice. The formal policy is largely made off of Bordeau and the University’s conversations with the State Department, other universities and the insurance provider.

“It’s minute by minute, that’s the actual truth. I will continue to monitor the events as they unfold,” she said. “There’s not necessarily a point where we say all clear.”

France may still be under a State of Emergency, but McArdle described the citizen’s moral as anything but fearful.

Forty-eight hours after the attacks, McArdle could tell the city was mourning, but moving on. Some patrons sat on the terraces of cafes having a beer or glass of wine, while others mourned across the city.

“With Charlie Hebdo and with the attacks, it’s made it so that French people all over the country are reaching out or standing up for it,” McArdle said. “I think it’s actually creating a stronger sense of nationalism.”ch