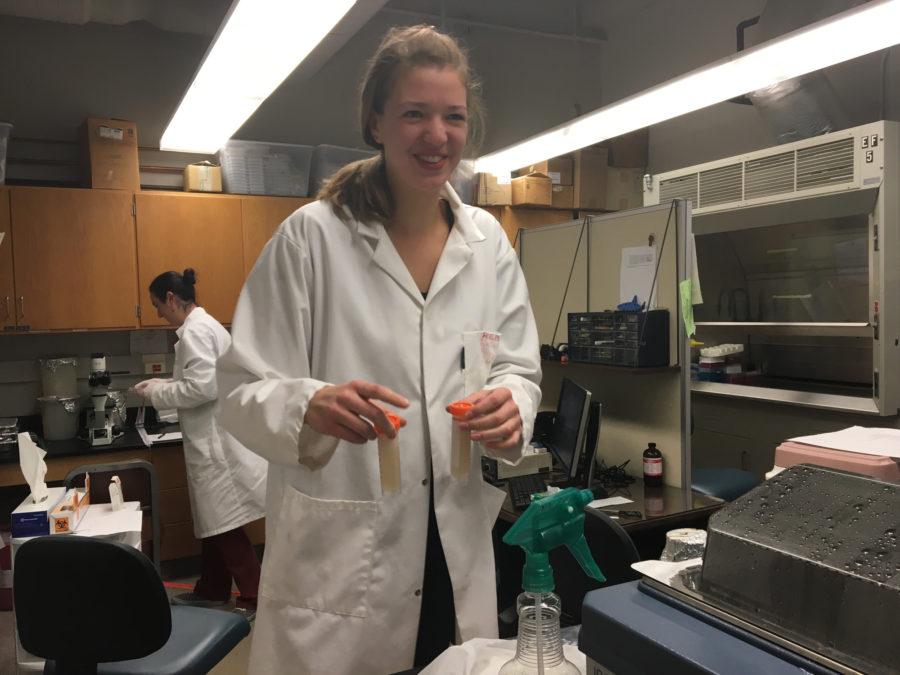 Kathryn Polkoff, a graduate student in animal sciences, stands 6 feet and 4 inches tall.RB No longer does she gear up in her kneepads and Fighting Illini volleyball jersey, but instead in her white lab coat, safety goggles and beakers.

However, even when she’s decked out for the lab, she lacks the look of intimidation one might expect from a towering scientist. In fact, Polkoff radiates childlike enthusiasm and brightness not at all associated with the crack of lighting and evil laughter surrounding the stereotypical mad scientist.

Polkoff recently graduated from the University with a bachelor’s degree in animal sciences. She’s currently on her second semester of a two year master’s degree program.

“When I was younger, I was totally a horse girl,” she said. “When I was nine, I really wanted horseback riding lessons … Eventually my parents said it was OK but they didn’t want to pay for it. So I started working at the stable.”

She groomed and saddled the horses but eventually helped apply treatments and medicine as well.

“I loved helping the vet. I thought it was the coolest thing ever,” she said. “So I thought ‘totally vet school,’ but then freshman year I was like ‘totally not vet school.’”

She said once she realized the scope of research being done on campus, veterinarian school wasn’t exactly what she wanted.

“I like to ask questions and kind of figure things out that people don’t already know,” Polkoff said. “At vet school, you have all the answers and you just need to answer what the question is.”

Polkoff is a researcher in the reproductive biology lab, sponsored by Matt Wheeler, professor of animal sciences. For her master’s project, she’s researching animal genetics.

Polkoff explained a new technology called CRISPR that is crucial to her research.

“(CRISPR) is a defense mechanism found in bacteria and it cuts your DNA. We’ve harnessed it in a way that we can edit our genomes at a specific location with high accuracy,” she said.

Essentially, scientists can change genomes and gene expression in animals with this technique.

Polkoff said this type of technology is relatively new and still somewhat controversial, but could end common diseases or health problems found in animals.

The salmon were then brought to the Federal Drug Administration, but weren’t approved for consumer consumption until 2013.

“People are terrified of eating transgenic animals, thinking it will cause all these crazy side effects, but it’s not true at all,” she said. “I would say it’s controversial, people get really defensive about what they’re eating. But if we want to feed everyone in the world, we’re going to have to rely on transgenic animals and adapt agriculture to fulfill our needs.”

For instance, Polkoff researches tropical cows found in places such as Panama because they produce only a liter of milk per day.

Conversely, cows in the United States produce up to 20 liters a day. Because of this, Polkoff and other researchers are working to create a more productive cow fit for tropical environments.

“There’s just not enough food for everyone and transgenic animals will help us feed everyone,” she said.

After her master’s degree is complete, Polkoff said she hopes to obtain a Ph.D. and eventually work as a professor. But for now, she continues to spend nearly everyday in the lab or on University farms studying pigs and cows.