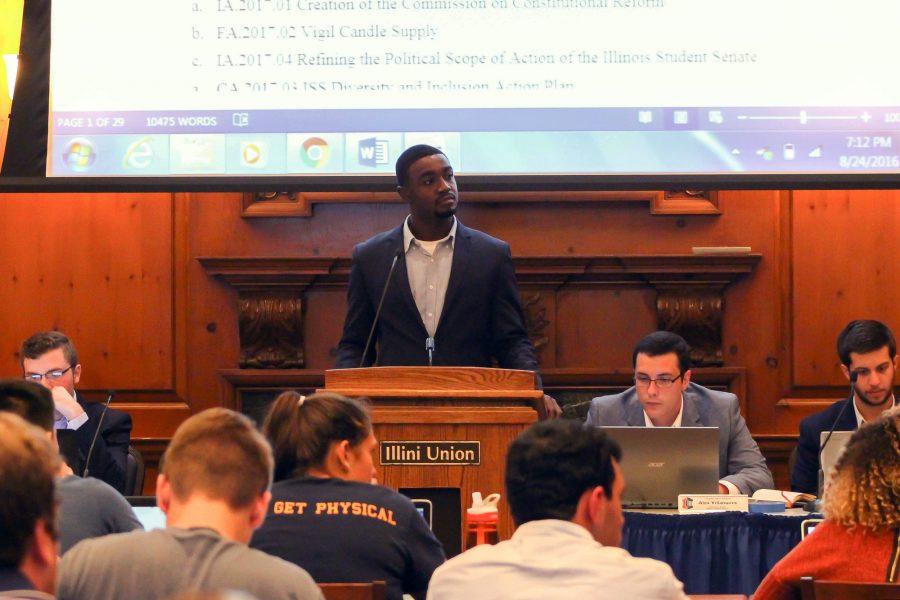 Changes could be coming to the Illinois Student Senate’s Constitution. The ISS has formed a Commission on Constitutional Reform, which will have meetings throughout the week to discuss possible adjustments to the document.

“What we are proposing is an ongoing process,” Senate Vice President Internal Spencer Haydary said. “Right now the Commission on Constitutional Reform is meeting to draft a report for the Illinois Student Senate to debate, and this will include a recommended Constitution. In a few weeks, the Student Senate will be debating the report as a body, and finalize the Constitution that we would like to see put on the ballot for referendum.”

Haydary was unable to dive into details regarding what exactly will change in regards to the Constitution, claiming that the ISS is examining the entire document, with changes being made constantly.

“What I can say is that we are working to ensure a balance of efficiency, accountability and transparency as an organization,” he said.

Haydary further explained that one of the primary goals of a revision would be to make sure the student population has a more direct say in Presidential and Vice-Presidential elections. Currently, the four executive officers of the ISS Executive Branch are chosen by the student senators themselves – not by ordinary students.

“The main concern is making sure we open our organization up more to the entire student body, and that they have a direct say in electing their President and Vice-President,” he said. “This is not to say that our current system doesn’t do that, we just want to make this organization as ideal as possible.”

The current Constitution was adopted back in 2011, but has been subject to criticism in the past. The ISS proposed a new Constitution just last year, but was unable to be passed due to time constraints, according to Haydary.

Haydary said he himself is strongly in favor of changing the Constitution in order to give the students more of a voice.

“I think the Constitution should change,” he said. “The current way is more reminiscent of a prime minister style, where our senate elects our leadership after being elected themselves, so it’s not undemocratic. But opening it up to the entire student body is something that is more consistent with the American idea of government, and is something I personally feel should be determined by the entire student body.”

The Commission on Constitutional Reform will be meeting throughout the week in the Illinois Student Senate Complex in the Illini Union to discuss the constitutional changes. In accordance with their desire to be as democratic as possible, all ISS meetings on the constitutional reform are open to the public. Haydary said he and the rest of the commission are incredibly open to hearing from its constituents on the matter.

“If people think the current system is not working, then it is our duty to make sure that it changes so that way it does work for them,” Haydary said. “At the end of the day, our job is to represent and serve the students here, and if something can improve, we’re willing to take the steps necessary to do that.”