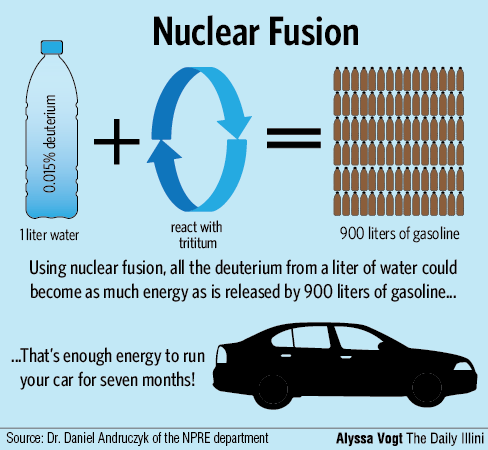 The Department of Energy awarded a $1.05 million grant to the University’s nuclear fusion device, the Hybrid Illinois Device for Research and Applications, or HIDRA. This grant, the first one for the machine, will allow researchers at the University’s Center for Plasma Material Interactions to conduct experiments with the HIDRA.

“The grant is specifically for developing liquid lithium technology to be run inside the fusion reactor as a component that faces the plasma,” Daniel Andruczyk said, the head of the HIDRA department at the CPMI.

The HIDRA is able to perform a high tech process called nuclear fusion. This involves taking two types of hydrogen atoms and smashing them together at high speeds, causing them to form the element helium and releasing huge amounts of energy.

One of the biggest obstacles of fusion reactors is that they require massive amounts of energy to run the reaction. The molecules must be at extremely high temperatures – hotter than the sun – to actually fuse. This poses a huge problem for researchers, as temperatures like that can melt anything the reactor’s walls are made of, forcing them to consider more unorthodox solutions.

“A whole bunch of people over the years have thought, ‘Well, if we’re melting this stuff, why don’t we just start with a liquid?’ A liquid metal,” Andruczyk said. “Turns out lithium is probably one of the best liquid metals we can have.”

He explained that there are actually many benefits to using liquid lithium in the reactor. Since it is such a small, light atom, it has a minimal effect on the energy of the plasma itself. It also tends to stay on the outside of the plasma. And because it’s such a reactive element, it sucks up many of the impurities within the plasma, allowing the process to be more efficient.

“We’re going to be able to do the first large-scale testing of our idea for this flowing liquid lithium,” Andruczyk said. “And if it’s successful, it could be the game changer. That’s the exciting thing.”

Scientists have been trying to harness the fusion process as a potential energy source for decades but have encountered many issues, including the temperature issues CPMI is hoping to solve using this grant.

The reason nuclear engineers and physicists have been trying so hard to get fusion to work is because it has tremendous potential to become the next big energy source. It produces no carbon emissions but produces massive amounts of energy using only water as fuel, making its fuel, called deuterium, virtually unlimited.

“If you take a liter of water, it turns out that .015 percent of that water has deuterium,” Andruczyk explained. “If you were to take all that deuterium and react it with the same amount of tritium, the amount of energy you get from that – and it’s a tiny amount [of fuel] – is the equivalent to about 900 liters of gasoline.”

In addition to this lithium research, CPMI has many more plans for HIDRA according to Director David Ruzic.

“Now that HIDRA is funded and running, it gives us a wide range of proposals and proposal opportunities to apply for,” Ruzic said. “This will broaden our scope beyond just fusion. Clearly it’s a fusion device, and fusion funding will be a key thing, but it also allows us to broaden our educational programs, our programs of other uses of plasma.”

Ruzic spoke about many of the potential plans with HIDRA, like using it as an educational tool for students of all kinds to learn about fusion. He also mentioned plans to use HIDRA with other engineering fields – something relatively rare at other universities due to the scarcity of fusion machines. Ruzic believes that this kind of collaboration could lead to special developments.

“I think we’ll have, somewhere along the line, some very innovative things that have never been done before,” he said.

CPMI also lets students studying nuclear engineering fields work on the HIDRA. One such student is Nirbhav Chopra, a junior in LAS. Chopra has worked at CPMI for a year and a half, getting hands on experience with the HIDRA.

“It’s really exciting because I get to work on a project that’s technically international now, which is pretty awesome,” Chopra said. “And we’re collaborating with another national lab. I get to meet all these smart and very ingenious people, and we get to work on stuff that might eventually go into the fusion reactor of tomorrow.”

Chopra believes that his work on the HIDRA can lead to a breakthrough that can make fusion a viable and economic resource.

“Fusion kind of seems like a perfect solution. Now the thing is to find the solution to fusion,” he said. “That’s the hard part.”