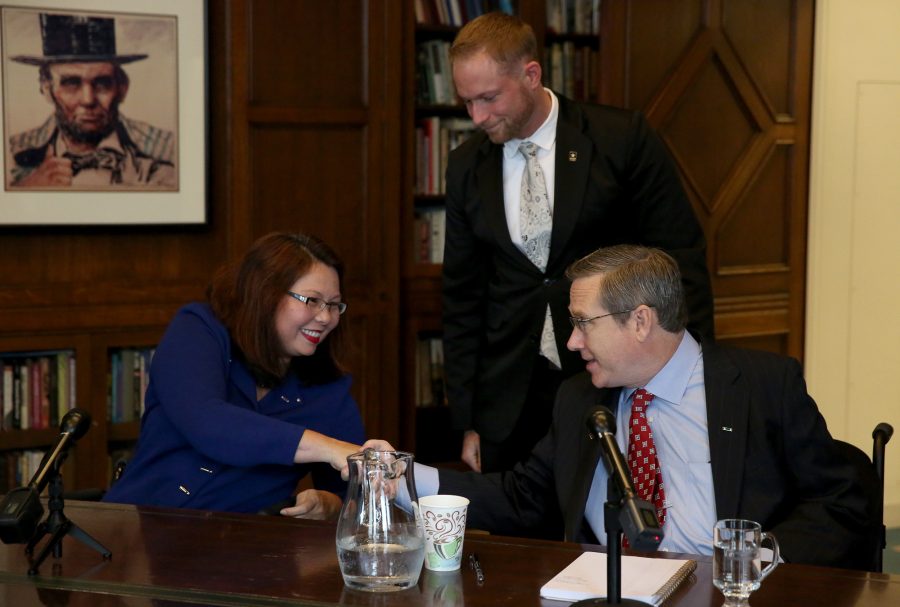 With so much focus on who next will be sitting in the Oval Office, it’s easy to forget that there are so many more political races happening in 2016 across the country.

The state of Illinois is no exception: one of its’ US Senate seat is up for grabs on Nov. 8, when Republican incumbent Mark Kirk will face Democrat Tammy Duckworth.

Republicans currently have 54 Senate seats, compared to Democrats’ 44. And, as a traditionally “blue” state, pollsters across the nation have speculated that Kirk’s seat is one of the most vulnerable Republican seats in the upcoming election. Polls have reflected this sentiment as well; RealClearPolitics’ polling average currently puts Duckworth up seven points.

Senator Kirk has served since winning in the 2010 midterm elections. Kirk, born in Champaign, served in the United States Navy reserve in the 1990s, and was recalled to active duty in 1999 during the Yugoslav Wars.

He then won the race for the Illinois’s 10th district House of Representative seat in 2000, serving northern Chicago suburbs such as Waukegan and Highland Park. Kirk served the district until winning the 2010 Illinois U.S. senate seat, defeating Democrat Alexi Giannoulias.

During both his tenure in the House and Senate, Kirk has gained a reputation for being a centrist. Socially, Kirk’s voting record indicates he is a moderate: he has consistently held pro-choice positions, is pro-gun control, and is pro-marriage equality.

He also denounced the Republican Party’s nominee for President, Donald Trump, in June, saying he was “too bigoted and racist.” Kirk said he would write in David Petraeus, former CIA Director, instead.

Kirk suffered a stroke in January 2012 while serving as Senator, causing him to leave the Senate for a year. He returned in January 2013 and has made a full cognitive recovery.

Representative Duckworth, on the other hand, is currently representing Illinois’s 8th congressional district, which includes northwest Chicago suburbs like Schaumburg and Hoffman Estates. She has served the area since winning the seat in 2012.

Duckworth was born in Bankgok, Thailand, the daughter of a U.S. Army veteran. Duckworth’s family heritage can be traced back to the American Revolutionary war. She moved to Hawaii when she was sixteen.

She joined the U.S. Army Reserve in 1992, and was deployed to Iraq in 2004. Duckworth lost both of her legs after her helicopter was hit by a rocket-propelled grenade, becoming the first female double amputee in the war, and received a Purple Heart.

Duckworth first ran for Congress unsuccessfully in 2006. The same year, she was appointed director of the Illinois department of veterans affairs by then-Governor Rod Blagojevich. In 2009, she was nominated by President Obama to serve in the U.S. Department of Veterans Affairs, where she remained until resigning in 2011 to focus on her second run for Congress.

Policy-wise, Duckworth is more of a traditional Democrat. She supports comprehensive immigration reform, is pro-Obamacare, and wants to move the country to a more energy independent future. She also wants to increase government investment in infrastructure.

Senator Kirk and Representative Duckworth engaged in a policy debate Thursday night at the University of Illinois at Springfield. The debate was a tense and highly contentions, with Kirk accusing Duckworth of lying about a discrimination lawsuit.

At one point in the debate, Duckworth was talking about her family’s military history and referenced how she can trace her lineage to the Revolutionary War.

Kirk responded to this by saying “I had forgotten that your parents came all the way from Thailand to serve George Washington.”

This drew an awkward pause from the debate audience, and gained national attention after the debate. Media outlets across the nation condemned Kirk’s statements, and the Kirk campaign quickly apologized.

His remarks cost him endorsements from the Human Rights Campaign, a gay-rights organization, and Americans for Responsible Solutions, an anti-gun violence committee.