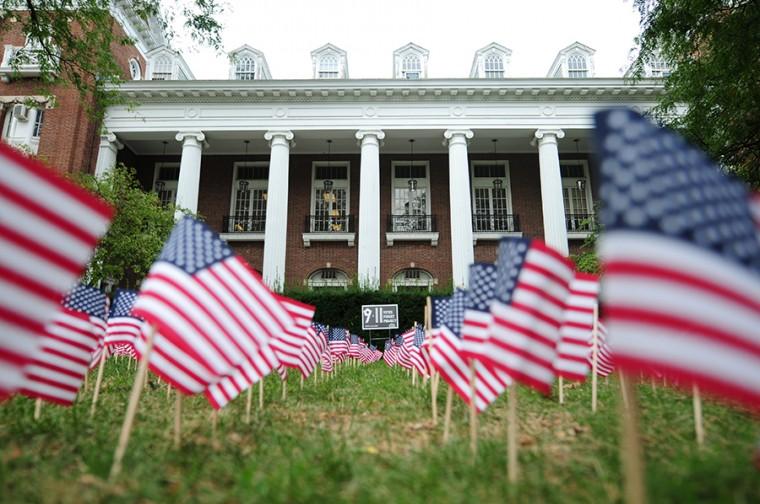 A rumor circulates that a female student drown in the basement pool of the Women’s Building. Now known as the English Building, she is said to haunt the building at night.

Late one night, decades ago, a University female was found floating lifeless in the English Building’s basement pool. It remains unknown if the drowning was purposeful or accidental. Since then, University students routinely report faintly hearing a woman’s voice, along with doors suddenly closing and floors loudly creaking in the basement’s computer lab: the site of the old pool.

… Or so the rumor goes. Such ghost stories at places like the English Building and Lincoln Hall have dominated campus folklore. In 2015, the University ranked fifth on College Magazine’s Top 10 Most Haunted Colleges.

“Nearby in the Lincoln building, people claim to see a ghost looking out the windows long after the building has closed for the night,” Kayla Zacharias wrote in the article. “No one knows who the ghost is, but rumors suggest it’s a former TA who died after jumping out of a window of the building.”

At the time, Pennsylvania State, Ohio University, Boston University and Saint Mary-Of-The-Woods made up the top four.

Yet the University believes the infamous English Building ghost has no factual basis. In 2014, the College of LAS published an article debunking an essential claim of the story: The English Building was never a dorm.

“Unlike doorknob-rattling spirits, the English Building’s history can be traced through blueprints and board minutes,” Dave Evensen wrote in the article. “None of the documented history of the University or the building suggests that it was ever a dormitory.”

Opened in 1905, the structure was originally called the Women’s Building. After a series of name changes, the English Building title came in the 1950s, Evensen said.

Yet, not all details of the folklore are incorrect. The English Building did once house an indoor pool.

“Indeed, the new Woman’s Building included a gymnasium and a pool (which figures into at least one theory of the aforementioned student’s death), along with sewing rooms and other amenities to teach women household science,” Evensen said.

Back in 2011, The Daily Illini debunked several popular urban legends. Notably, a common rumor circulates around campus that if a student’s roommate dies in a resident hall the student will receive straight A’s for the rest of the semester.

However, this rumor has no factual basis.

“No one really knows where these myths came from, which is half the fun of telling them,” the article states. “They’ve been circulating campus for what seems like forever, waiting for incoming students to pass them along.”