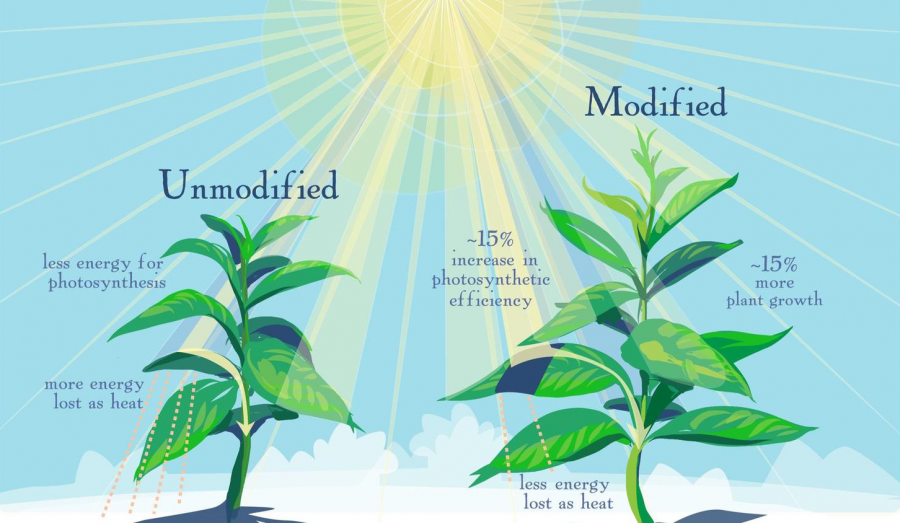 By 2050, the United Nations Food and Agriculture Organization estimates that the world will need to raise food production by 70 percent. But, this increase is not going to happen naturally.

“Looking at the rates of crop improvement, we’re not going to get there,” said Stephen Long, crop sciences professor. “So we need new innovations to really ensure (higher production) for the future.”

Long and other University researchers may have found the answer to this shortfall: genetically improving the efficiency of photosynthesis in food crops.

Long said photosynthesis is arguably the most important process on the planet because it is necessary for all food production, many fibers and the ultimate source of all fuels.

Through computer modeling, researchers at the University discovered that the time it takes for a leaf to adjust to the level of light slows down photosynthesis and hinders a considerable amount of the crop’s productivity.

Long, along with University researchers and colleagues at the University of California, Berkeley, have spent the last ten years working on ways in which they could speed up the adjustment.

This recent discovery resulted in significant increases of productivity in crop yield.

When plants are in direct sunlight, they usually receive more sunlight than what they require. This allows them to activate a mechanism that converts light to heat. However, it delays the production of carbohydrates, an important part of the photosynthesis process.

The genetic changes introduced by the researchers allow the plant to turn off the heat mechanism faster, which allows photosynthesis to maximize the production of carbohydrates.

During the Green Revolution in the ’60s and ’80s, scientists developed a new generation of seeds. These seeds led to massive increases in food production, the transfer of agricultural techniques to developing countries and a reduction in world hunger.

The research project that Long is a part of, Realizing Increased Photosynthetic Efficiency (RIPE), could be the next “Green Revolution.”

Long said that photosynthesis in crops has hardly changed in over 5,000 years. RIPE sees the process as an opportunity for innovation.

The productivity increase that Long and his team have witnessed in their experiments are between 14 to 20 percent, which is substantial compared to the one percent yearly increase allowed by breeding alone.

The research team primarily focused on engineering tobacco crops because it is less complicated to genetically change than other crops.

“We needed a plant which would be like any other crop,” Long said. “(Tobacco) was our vehicle for tests. We now know it works and are trying to move into food crops, such as rice, cassava, soybean and cowpea.”

Those food crops are of special interest to the Gates Foundation, the sponsors behind the research, because they’re grown in regions where there is, or there’s likely to be, food shortages.

One of the barriers the researchers were up against was that people have always recognized photosynthesis as the main source for plant fuel. There’s a lot of skepticism about whether the process can be improved, Long said.

This is the first time anyone has ever genetically modified the photosynthesis process, he said.

Johannes Kromdijk and Katarzyna Glowacka, postdoctoral research associates at the Institute for Genomic Biology, are the two main researchers working alongside Long.

“This University has always been a center of plant research excellence, and this research falls in line with the big discoveries that were made here before,” Kromdijk said.

Some of the fundamental discoveries, which explain the process of photosynthesis, were made on this campus over fifty years ago.

Researchers at the University also discovered how many photons are required to fix one molecule of carbon dioxide. This led to the realization that there had to be two photosystems in photosynthesis.

The existence of photorespiration and its mechanism, which are key factors in crop efficiency, were also discovered at the University.

“For a long time, it was really hard to measure photosynthesis properly, and it still is,” Kromdijk said. “The viewpoint changed quite dramatically when people started growing crops in elevated carbon dioxide … (which) resulted in the crop yield increase. It told us that there is something in this idea of increasing photosynthesis to increase crop yields.”

A significant contribution to those experiments was made by the SoyFACE facility, which is an open-air facility the University uses to investigate the impacts of atmospheric change on crops.

Long said, before their research can achieve monumental impacts, there’s a long regulatory process it has to go through, which can take at least fifteen years.

“There’s a technical side to it, which means we have to repeat what we’ve done (with the tobacco crop) in a food crop or any crop that produces something useful to people,” Kromdijk said. “We have to see if it works the same and actually increases the part that we want to harvest.”

Another challenge they may face is public perception of Genetically Modified Organisms, commonly known as GMOs.

“One positive story can change public opinion about (genetically engineered crops),” Glowacka said. “This research is proof of what elements we can change and how that works. We can achieve the same or similar effect, not necessary by genome, but by adding extra copies of the genes to modify the expression of the native genes that are already in the crops.”

Kromdijk said that the crops produced with the alteration of photosynthesis do not necessarily have to be qualified as a GMO because they are only tinkering with genes that the crop already has, instead of adding foreign ones.

The researchers on this project believe that this discovery can have significant economical impacts.

A 14 to 20 percent increase in soybean yields per year is worth billions of dollars, Long said.