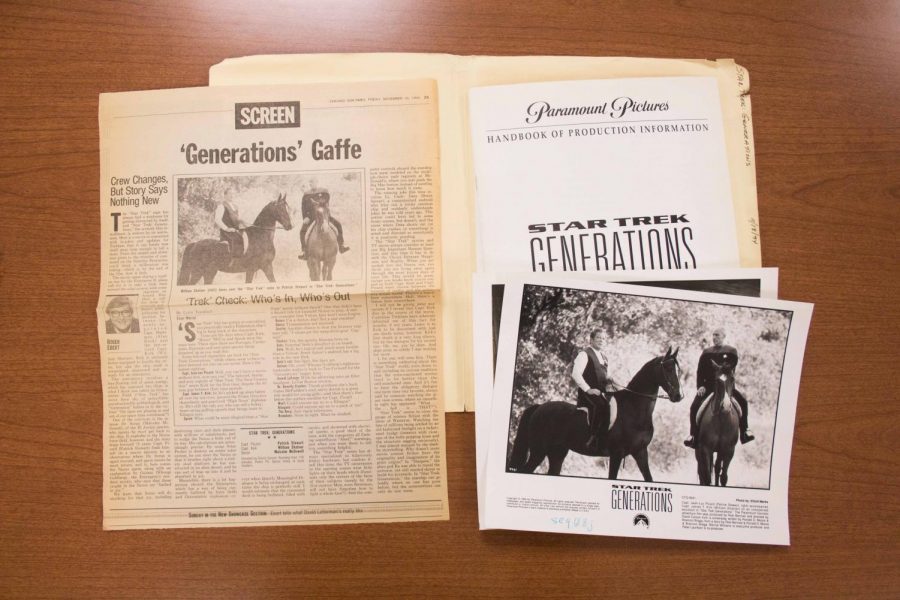 Photograph of newspaper clippings and photographs from film sets in Roger Ebert’s archive.

Two trips of the University archivists to Chicago Sun Times on Sept. 30 and Oct. 12 to 13 have brought back over 3,000 pounds of press kits used by Roger Ebert when he worked as film critic for the newspaper.

The Sun Times decided to move the press kits because it will not have enough space to store them when it moves to a new location, William Maher, University archivist, said. Chaz Ebert, widow of Roger Ebert, contacted the University right away when the Sun Times notified her.

“Chaz approached us, and said the very first place I would want to give these materials is the University of Illinois, because the University and Champaign-Urbana is so special for her husband,” said Wojtek Chodzko-Zajko, interim dean of the College of Media.

Maher said it has been a project of at least 17 years for the University to acquire personal materials of Ebert, a dedicated University student in the 1960s who grew up in Urbana, and went on to become a world-renowned movie critic.

As a freshman, Ebert started a left-winged newspaper, wrote columns for The Daily Illini and later became a sports editor, Maher said. During the years of student activism regarding civil rights, he launched multiple campaigns, including a persistent one on student involvement in the State Farm Center.

The University Archive has been working on the arraignment of the materials, which will be available to researchers, students and visitors. Maher said the completion of the arraignment should be done by graduation in May 2018.

Muhammad Al-Saqri, senior in LAS, said he cannot wait to look at the materials.

“I grew up hearing my parents talk about his critics,” Al-Saqri said. “I’m more than thrilled to see through my own eyes what the fuss is about.”

The materials from the Sun Times are the first part of additional materials the University hopes to secure in order to promote the contribution of the legacy of Ebert, Chodzko-Zajko said. For the last 20 years, the University has sponsored a Roger Ebert film festival called Ebertfest. The College of Media awards two undergraduate students each year with Ebert fellowship in recognition of Roger’s career.

“Few people over the age of 40 do not remember watching Roger Ebert on television critiquing the most important movies at his time. And many people remember reading Roger’s movie review on the Sun Times,” Chodzko-Zajko said.

Ebert’s ability to express what everyone can see in the movie, but don’t know how vocalize makes him special, Chodzko-Zajko said. It is especially important in a society where movies are a critically important component of commentary about life.

“He is an intellectual, social and political phenomenon, who expressed his point of view through reviews of movie,” Chodzko-Zajko said. “We should be very grateful and very proud to host his papers in the University archives.”