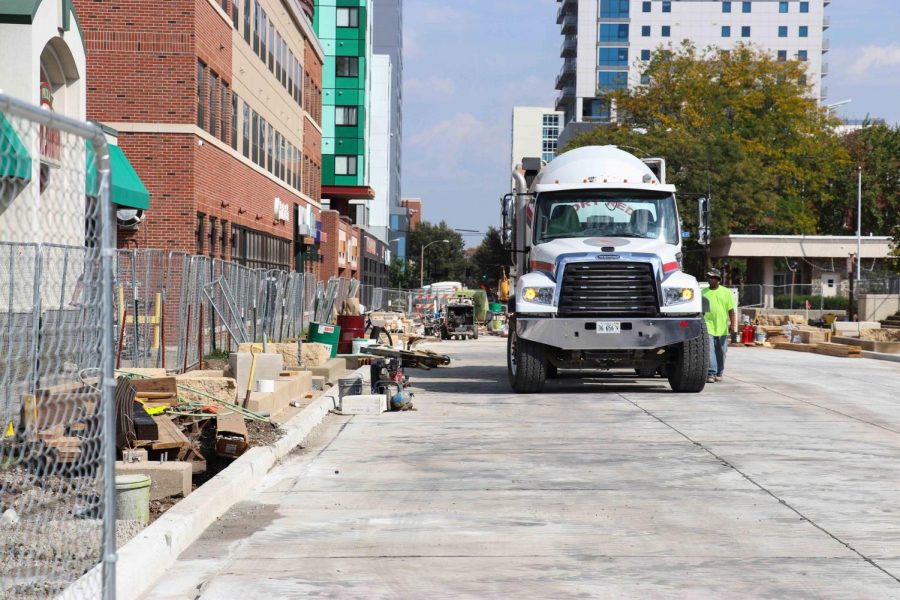 Heavy construction located on Green Street between First and Second streets in September. MCORE projects will stop construction until 2018.

On Dec. 17, construction on campus roads stopped until the arrival of 2018.

“We are wrapping up construction for the year by Dec. 17,” Kris Koester, administrative services manager & public information officer of City of Champaign Public Works, wrote in an email.

He confirmed that construction is nearly complete in both Champaign and Urbana sections of Green Street, leaving only additional projects like street lighting and permanent pavement markings for 2018.

The construction, conducted by Champaign-Urbana Multimodal Corridor Enhancement Project, seeks to provide the University district with wider sidewalks and traffic lanes, improved lighting and above all, enhanced transportation, Koester wrote.

The project kicked off in April 2015, but construction didn’t begin until March 2017.

The project is funded by a federal grant called the Transportation Investment Generating Economic Recovery Grant, and is co-sponsored by the Champaign-Urbana Mass Transit District, the University of Illinois and the Cities of Urbana and Champaign, according to the project website.

Project One is on Green Street from Mathews Avenue to Lincoln Avenue. It had an original completion date of Nov. 3, but it finished and reopened for two-way traffic after Thanksgiving.

The first section of Project Two is on First Street. It reopened to two-way traffic on Aug. 21, ahead of the University’s move-in weekend.

The second part of the project from Neil Street to First Street will reopen by Dec. 17.

Project Three, which is on White and Wright streets, is scheduled to begin construction in March 2018 and is to be completed later in the spring.

Project Four, on Wright Street and Armory Avenue, and Project Five, on Green Street from Lincoln Avenue to Race Street, will be auctioned for contract in October 2018, with a plan to begin construction in March 2019.

Ava Castelaz, junior in LAS, said she feels the construction during the semester is intense, especially by the Engineering campus.

“Personally I don’t feel much change after all those constructions are done, though,” Castelaz said.

Koester said the MCORE project has experienced various drawbacks that have caused delays, including several days of rainfall early in the project and the state budget shutdown in midsummer, which caused approximately two weeks of delay.

In addition, Koester said the MCORE project has been working with Illinois American Water to replace the 100-year-old water channel that goes under the new pavement.

Kylie Alausa, sophomore in LAS, said it was hard to get around when the construction was at its peak.

“But (looking) at it as it is now, I think it is a pretty good idea that they set (the project) up,” Alausa said.

The MCORE project is meant to have lasting positive impacts like enhanced mobility choices around adjacent businesses and properties in the future, and advocates cooperation from property owner and businesses, according to the project website.

To mitigate its current impact on residents and the traveling public, Koester said the project has placed detour and directional signs around the construction, and advertised the project work through media interviews.

“The project partners appreciate the cooperation and patience of business and property owners near the project as well as the general public,” Koester said. “It is the hope that this project will transform transportation that links between downtown Champaign, campus and downtown Urbana.”