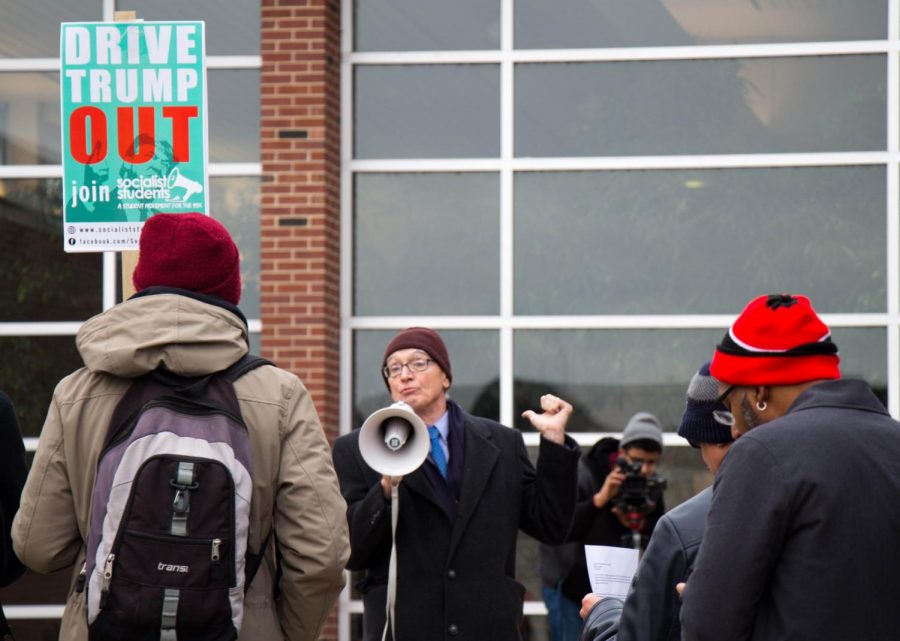 International law professor at the University College of Law, Francis Boyle, voicing his opinions regarding the current president on Wednesday.

Protesters met at the University of Illinois College of Law to rally against Dean Vikram Amar’s decision to invite Deputy Solicitor General Malcolm Stewart to speak to students and faculty.

Professor Francis Boyle, senior law professor at the College of Law, said, “This is the first time a high level henchman in the Trump administration has come to this campus and it’s inexcusable.”

Boyle said they are against the College of Law giving Stewart attention to come to the University and to try to spread the Trump propaganda party line through campus.

Madge O’Brien, local protester, said she doesn’t support the Trump administration’s policy on immigration and war, along with many other policies that it’s currently advocating.

“I wish they would remember the statue of liberty and the message that it brings, which is, ‘Give me your tired, your poor, your restless, your refuge yearning to be free,’ and which has welcomed so many of our ancestors for the last 400 years,” O’Brien said.

As Boyle was the only faculty member from the College of Law present at the rally, he spoke out against his fellow faculty members, calling some “bigots and racists against Muslims.”

“This henchman has been working for the Trump department of injustice for the last year and helping them inflict every hideous atrocity you can possibly imagine on everyone in our country, including Latinos, undocumented people, gays, transgenders and Muslims,” Boyle said.

He focused on the issue prominent at this University: Deferred Action for Childhood Arrivals.

He said this case is crucial as it makes its way up to the U.S. Supreme Court by Stewart.

“For me, I’m the child of an immigrant, of course that’s ridiculous that they would bring a speaker that supports some of (Trump’s) very unpopular policies like the ban and deportations,” said Andrea Herrera, University alumna.

With Ben Mueller, member of the C-U Immigration Forum, leading the protesters, they chanted: “No hate. No fear. Immigrants are welcome here.”

Mueller said to the crowd that immigrants make our community a better place to live, and he encouraged the chancellor of the University to send a similar message to its students after the College of Law hosts Stewart.

Boyle explained how, like DACA, the transgender policies and others Trump has tried to pass will occur more easily working under the deputy solicitor general.

“(LGBTQ people are) humans just like the rest of us,” Boyle said. “They’re entitled to the same rights all the rest of us have, certainly that’s how I teach my law students to protect.”

Boyle said their fear is the Department of Justice, particularly Stewart, taking orders from Trump without any effort to fight injustice.

Gus Wood, member of the Graduate Employees’ Organization, explained fascism as a counter-revolutionary movement that deploys a mixture of social agitation, terrorist methods and resource deprivation.

“The fascist state thrives on us individualizing our critic of Trump; they need it to survive,” Wood said.

Wood said this fascist state began long before Trump, and his removal will not end that state because more will continue to carry it out in Washington.

“The only constituency that benefits socially from this fascist movement are the white supremacist nationalists who need terror to be effective,” Wood said.

He said the way to gain legitimate legislation is to seek leadership at the local level and to build up communities.

Boyle told the people protesting the College of Law’s event that they are the cutting-edge Trump resistance in Champaign-Urbana.

“So we are here to make a stand against Trump,” Boyle said. “This is the Trump resistance in our community and on our campus and to condemn what I would call the Trump College of Law for bringing (Stewart) in here.”