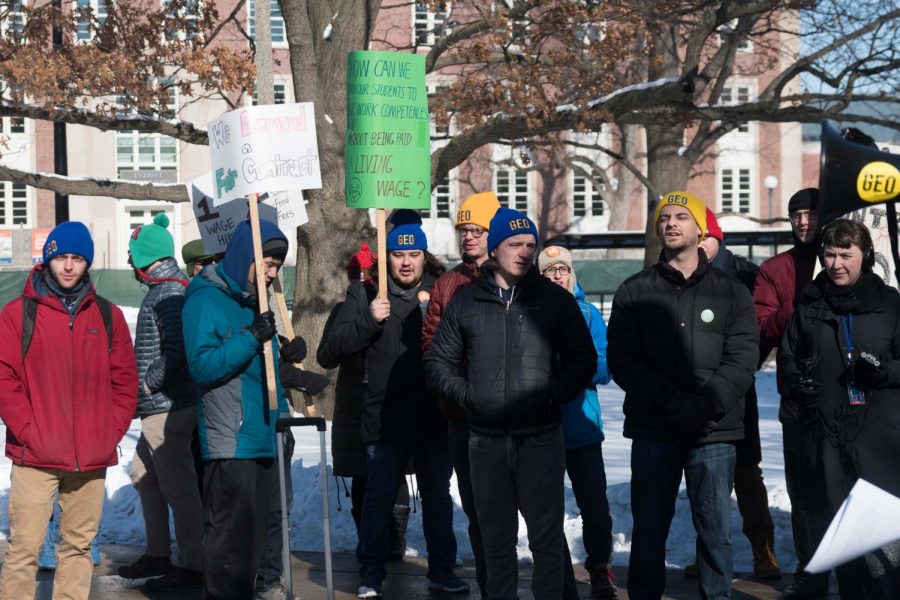 The Graduate Employees Organization filed an intent to strike notice with the Illinois Education Labor Relations Board on Monday.

This notice comes after University administration failed to respond to substantial movements in the GEO’s latest proposal, according to a press release.

This notice gives the GEO the protection to stop work if it is necessary in the future, meaning that at any time on or after Feb. 9, the GEO can call for a strike without any additional notice to the University.

According to the notice, the GEO has attempted to use all possible courses in resolving the contract, including mediation, filing two unfair labor practice charges and making substantial movement from its original contract proposal.

“Our union began bargaining with the University administration on March 30, 2017, and our contract expired on Aug. 15, 2017. We are over 160 days without a contract,” said Gus Wood, GEO co-president and Ph.D. student in history.

The GEO determined that contract negotiations wouldn’t be resolved at the table without abandoning many union protections and the chance to secure financial stability for its membership.

“We are deeply disappointed that the administration forced us to utilize a threat of a strike solely to acknowledge the value of our work as teaching assistants and graduate assistants,” Wood said. “Everyone deserves financial stability, and the administration’s contract proposals jeopardize our productivity as workers and push education to the realm of unaffordability.”

The University responded to the intent to strike notice in a media advisory by saying they “were somewhat surprised and disappointed to learn of the decision at this point in the negotiations” because they had a mediation session set for the day after the intent was filed.

According to the advisory, Andreas Cangellaris, the University’s vice chancellor for academic affairs and provost, said the University has told the GEO the negotiating team would be prepared with counter proposals at the following day’s meeting.

“We will continue to negotiate in good faith and we remain absolutely committed to reaching a resolution as soon as possible. We have made good progress with agreements reached on 12 of the 19 original proposals,” Cangellaris said.

Wood said their only hope is to resolve the contract issue at the bargaining table.

“We do not want to go on strike because we love our work and love teaching our undergrads. We hope this notice of our intent to strike if negotiations continue to go sour will pressure the admin to finally bargain proposals that directly address our need for financial stability and access to higher education,” Wood said.

Wood said the current proposals suggest the University has “no interest or care in us as graduate workers or students, and that’s the most heartbreaking part of this.”

In regard to the University administration’s media advisory saying the intent to strike came as “somewhat of a surprise,” Wood said, “that is a complete and utter fabrication.”

“We have expressed repeatedly to the University administration that their stalling and refusal to bargain fairly at the table would result in our membership deciding to file the intent to strike paperwork,” Wood said. “They’ve known about this for quite some time, as we have actually spoken about this face-to-face with them. Their idea of this being a surprise is a false narrative.”