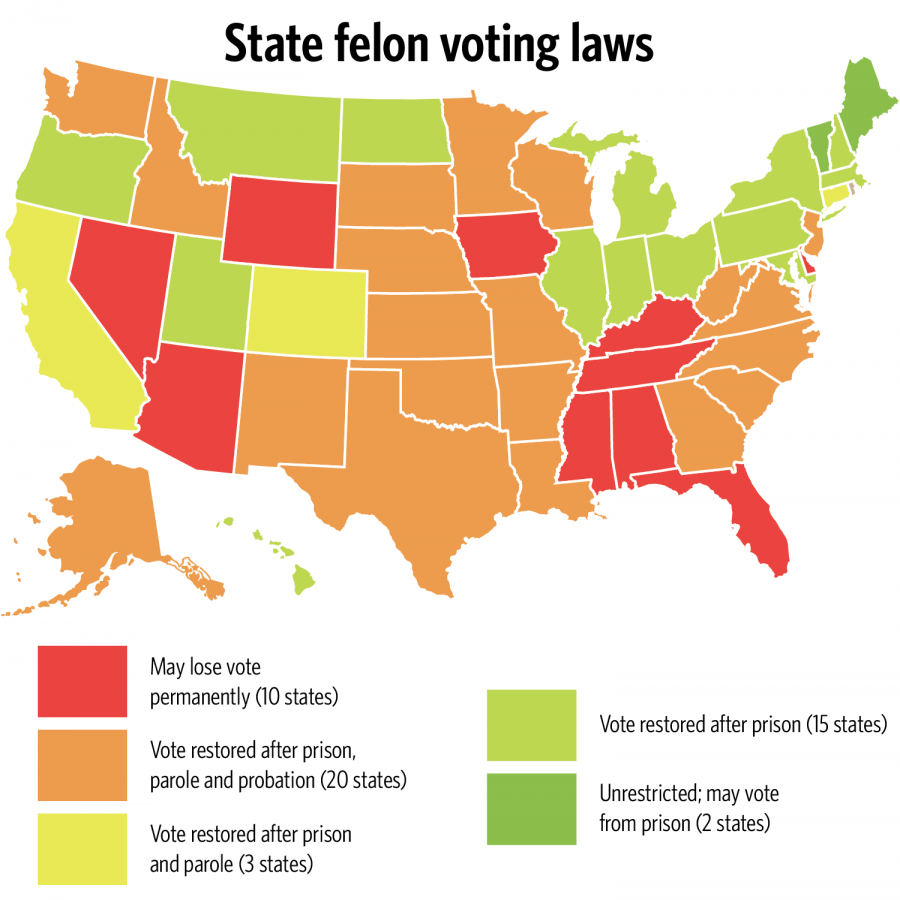 Although former felons are allowed to vote in Illinois, Mike Ingram, a Democrat running for the District 6 seat on the Champaign County Board, said he has encountered many former felons on the campaign trail who are unaware they can vote.

“During my campaign for the county board, I always have a couple of people telling me that they can’t vote because they are ex-con,” Ingram said. “People seem to be very excited when I told them that they can vote.”

Although some states have banned people with felony convictions from voting, Illinois does not take away voting rights from former felons.

A study by ProCon.org, a site that specializes in researching controversial issues, shows Illinois as one of the most liberal states in terms of felon voting laws.

“As long as you are not in prison, you can vote,” Ingram said.

“When you look at the states that have the most regressive rules regarding felon voting and when you look at who is disfranchised the most, it’s hard to not draw any conclusion of why the policies are there,” Ingram said.

Ingram said harsh felon voting laws will not bring the U.S. the change he believes the country needs, because many disenfranchised voters would have voted for Democrats had they been given the chance.

“We are in a tough spot right now; climbing out of it will need as many people as we can get,” Ingram said.

Brian Gaines, professor in political science, said in an email felon voting rules can differ a great deal from state to state because each state sets its own voting laws.

“Illinois allows voting while on parole and probation, but not while incarcerated, and automatically restores voting rights upon release,” Gaines said. “That’s comparatively ‘liberal’ or friendly to the ex-prisoner, by the current U.S. standard.”

Unlike southern states like Florida and Oklahoma, Maine and Vermont make it possible for people to vote in prison. Ingram said many people may find that hard to accept, but he doesn’t have a problem with people voting in prison.

“They are still citizens,” Ingram said. “And they could potentially vote for people who can change their life.”

Joe Coyle, graduate student in LAS, said he thinks voting rights are important to every citizen.

“Folks who have records or who are currently incarcerated are important members of the polity,” Coyle said.

Though extending voting rights to felons is a controversial issue, Ingram said because ex-felons have already served their sentences, they should be allowed to vote once they leave prison.

“Most people I talked to agree that if you put in your time, you should be able to vote again,” Ingram said.