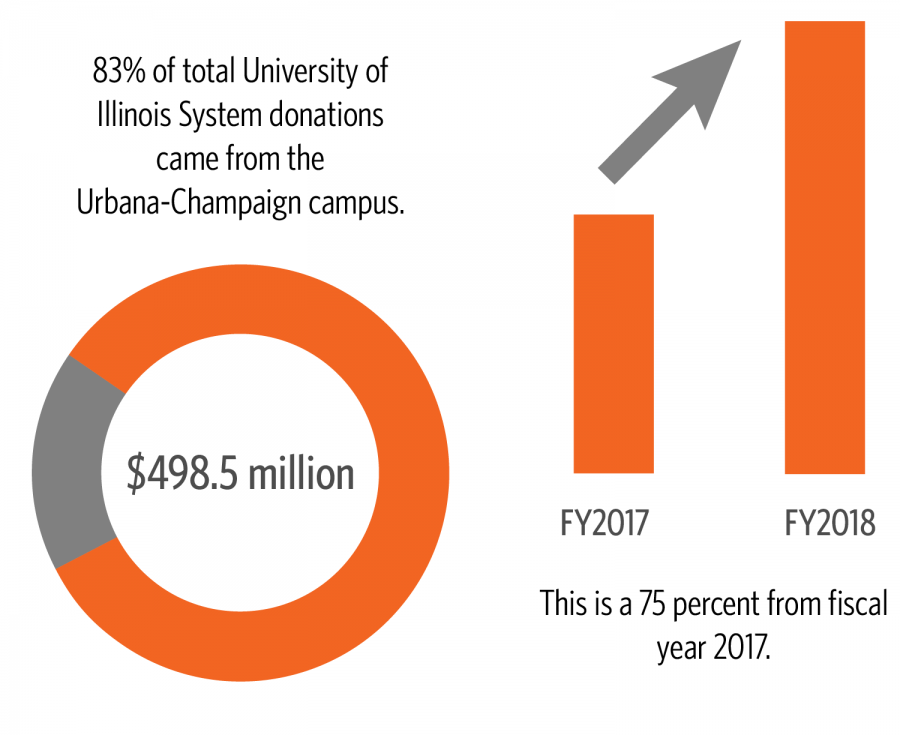 The University System reached a record high in fundraising in the 2018 fiscal year from gifts, grants and pledges totaling $498.5 million, the University of Illinois Foundation announced Friday.

“We are excited about the investment our donors and friends have chosen to make in the University of Illinois. We are thrilled with an all-time high for our new business and cash gifts,” said Rick Darnell, UIF’s senior vice president for campaigns, marketing and communications, in an email.

“The overwhelming majority of gifts and commitments from last year were from passionate alumni, followed by our corporate partners and friends,” said Barry Benson, vice chancellor for advancement of the University’s eight-year fundraising campaign ‘With Illinois.’

The University alone raised $415.4 million from more than 100,000 gifts and commitments. In October, Larry and Beth Gies gifted the College of Business $150 million, which significantly contributed to the fiscal year’s total.

“From the transformational gift from Larry and Beth Gies to the recent alums who made their first-ever gift, every donor is important and has contributed to last year’s success,” Darnell said.

The end of FY2018 also marks the halfway point of ‘With Illinois,’ which will mostly support student scholarships and grants.

“We knew the campaign launches would be transformative,” Darnell said. “The ‘With Illinois’ campaign has received gifts from 50 states and over 100 countries.”

This year, more than $236 million was committed or pledged toward making the Illinois experience more accessible, Darnell said.

“We received approximately 150,000 gifts during FY18, and I would like to think the successful ‘With Illinois’ campaign … and the collective emphasis of highlighting the role of (philanthropy) throughout last year played a significant role in our success,” Benson said.

Of the $302.6 million total, $95.4 million was designated by donors to a university, college, department or program for its unrestricted use at the discretion of the dean or unit head.

“As our UI Foundation President and CEO Jim Moore (Jr.) stated today: ‘Our donors are the heroes,’” Darnell said.