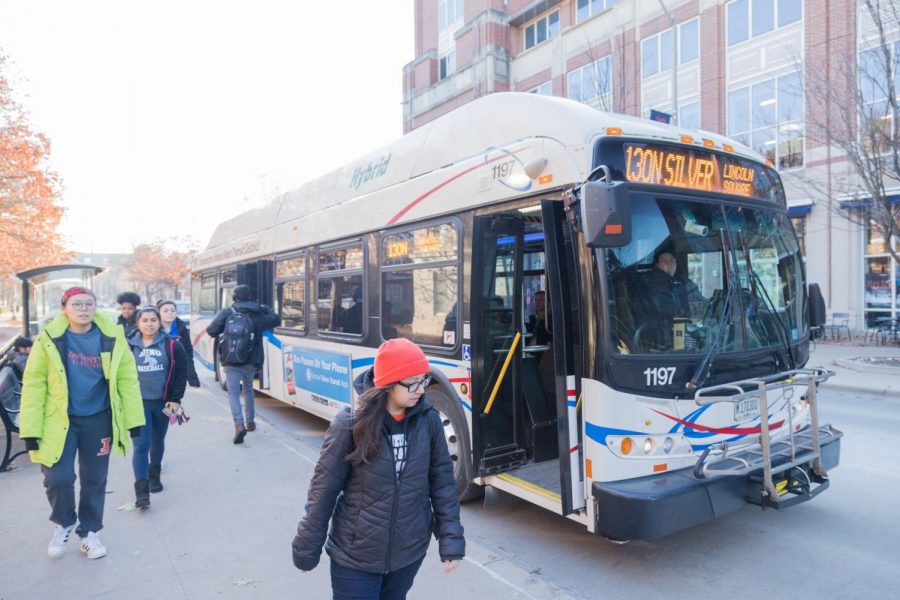 CUMTD buses see a 10 percent increase in ridership in winter. The transit company is trying to keep up with the increase in demand.

Champaign-Urbana Mass Transit District buses see a 10 percent increase in ridership during the winter season compared with other times of the year, according to Evan Alvarez, planner at MTD.

Although fewer people ride buses during the holiday season in November, December and January when students are out of town, there is a higher ridership each day due to the cold, Alvarez said in an email.

“Students really care about getting to class, and that’s why they’re taking the bus, and so I feel like sometimes there can be some frustration where people are all trying to crowd onto the bus at the same time,” said Ellie DiGiulio, senior in LAS.

According to Meid, extra buses might not be available during peak times. If buses run along a route frequently, the MTD relies on the next bus to pick up passengers the previous bus could not.

“We would clearly love to have more vehicles and drivers available, but that isn’t always fiscally or logistically possible,” Meid said.

Because of the increase in ridership during the winter, Meid suggests University students arrive at their stops early or take an earlier bus. Students should exit through the back doors instead of the front and allow others to exit before boarding, she said.

Despite the availability of extra resources, DiGiulio sometimes decides against riding a bus because it’s too crowded and being close to other people makes her uncomfortable.

Delaney Foster, freshman in LAS, would like to see an improvement in the straps used by standing passengers to balance.

Foster thinks overcrowded buses can be unsafe. She said during a bus ride, she did not know she was standing by the door because the bus was crowded. When the door opened, it pushed her into another person.

“I definitely hate (crowded buses), and I definitely feel like it spreads germs because I think it’s getting me sick just from being on the bus,” Foster said. “So now I carry hand sanitizer with me. I don’t like how sometimes it’s packed.”