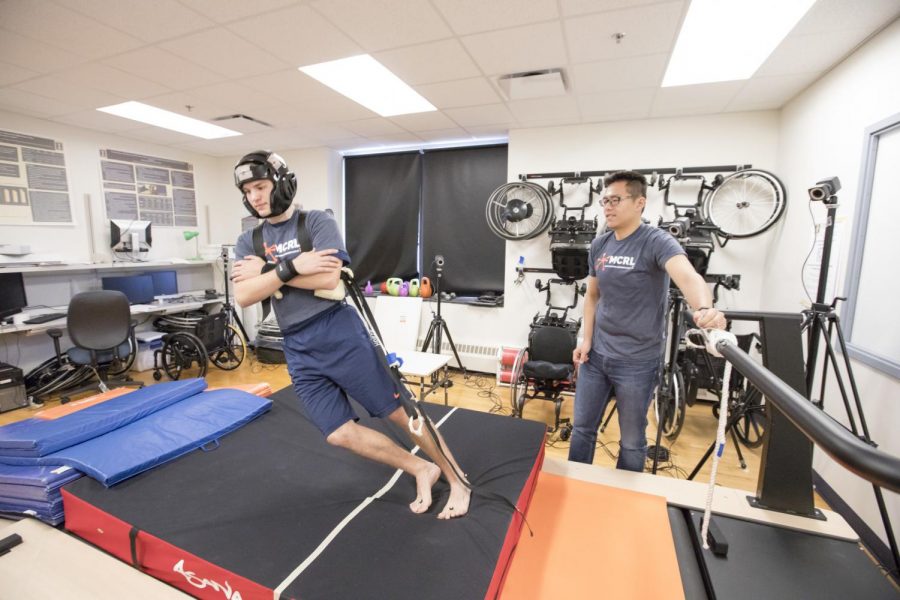 A research participant falls onto a mat during a fall test. These tests are intended to minimize the amount of injuries senior citizens receive after falls.

As people age, certain physical activities become more challenging, and there is a greater risk of exertion which can lead to serious injury.

A University professor is seeking to reduce these injuries among older populations with a study published in the “Journal of Biomechanics,” focusing on strategies for safer falls.

Jacob Sosnoff, professor in AHS and director of the department’s Motor Control Research Laboratory, was largely inspired to pursue his study from personal family experience.

“My grandfather, who I was very close with, had some walking challenges, and he fell relatively frequently,” Sosnoff said in an email. “I learned fairly quickly that falls are something to avoid — if at all possible.”

Manuel Hernandez, assistant professor in AHS and director of the University’s Mobility and Fall Prevention Research Laboratory, said death and devastating injuries resulting from falls have remained a constant source of concern for America’s elderly population.

“Falls are the leading cause of fatal and nonfatal injuries among older adults over 65 years of age,” Hernandez said. “The possible dangers of falling in older adults include serious injury, including hip and hand fractures, head injury and death, decreases in mobility and loss of independence.”

Sosnoff said the omnipresent anxiety and risk of falls can also lead to a decrease in overall quality of life for even relatively healthy seniors who haven’t experienced or have recovered from falls.

“Among older adults over 65 years of age, about 30 percent of older adults fall each year, with medical costs of falls in the U.S. medical system at over $50 billion per year,” Hernandez said. “So not only are falls a common problem among older adults, but (they) present a costly problem to our healthcare system.”

As this isn’t a new problem for the medical community, Sosnoff said there have been many proposals to decrease the frequency and severity of falls, so far to little effect.

“Although these approaches have merit, their effectiveness is somewhat limited, and fall-related death and injury rates continue to climb,” Sosnoff said.

Sosnoff said with his experience in kinesiology and the help of a Judo master, he and his team worked to find a position during a fall senior test subjects could be taught in order to reduce injury.

To ensure participants could remember their fall strategies after a certain period of time, Sosnoff met with his subjects a week later to compare the force in which they hit the ground after they fell.

“Overall, we observed that the older adults that received the training reduced the force they hit the ground with by 33 percent, and they keep this ability to land softly one week after training,” Sosnoff said.

Sean Mullen, associate professor in AHS, said reduced impact in falls has implications on the rate and severity of injuries for seniors, especially related to vulnerable areas such as the head and hips.

“If they are able to replicate this study on a larger scale, it would mean that this technique could reduce the likelihood of a hip fracture and head trauma, and it could reduce the burden on our healthcare system,” Mullen said.

Hernandez said the solutions proposed in Sosnoff’s study were more realistic and easily applied, as they seek to reduce the severity of falls rather than trying to drastically decrease or eliminate such a complex and ongoing issue.

“With the proposed strategy, you may not be able to reduce the overall number of falls per year in older adults, but you would hope to decrease the number of injurious falls,” Hernandez said.

Mullen said while there is no universal solution to falls among older populations, adults can reduce their risk of falls later in life by remaining active and making healthy lifestyle decisions as they age.

“As an advocate for fitness and healthy aging, I encourage older adults to pursue physical activity programs that involve complex movement, strength, flexibility and balance training,” Mullen said. “This could include, but is not limited to, martial arts, tennis, dancing and yoga.”

Hernandez pointed out several resources older adults, their loved ones and caretakers have in the Champaign-Urbana area on hand to educate and protect against more serious falls and injuries.