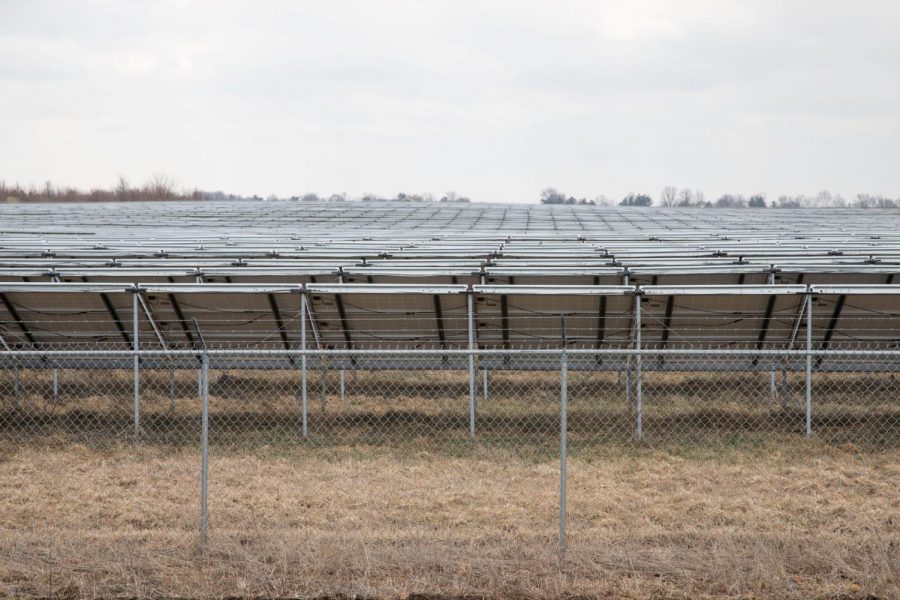 The University Solar Farm covers 20.8 acres and is located along the south side of Windsor Road between First Street and the railroad tracks.

The state of Illinois will move to using 100 percent renewable energy, which includes solar, wind and other naturally replenished energy sources, by 2050, according to the Clean Energy Jobs Act that passed Feb. 27.

Rizwan Uddin, director of the energy systems program, said Illinois is the most nuclear state in the country, as almost 50 percent of its energy comes from nuclear power.

“Illinois has always been the center of nuclear reactors and activities,” Uddin said.

The Act, also known as Bill SB2132, targets 2050 as the year the state can go fully fossil-fuel-free. Their first step is to generate 45 percent of the electricity of the state from renewable sources by 2030.

However, Uddin said this bill will be problematic for the state as to what will happen if the wind stops blowing on a summer night.

“On a summer night, your windmills are not turning and you don’t have any other source of electricity,” Uddin said. “What is always needed is what we call base load power, some reactor that will continue to provide electricity when the wind is not blowing.”

Currently, a small amount of energy used in the state comes from solar and wind, which cuts down the carbon, Uddin said. Nuclear is currently counted as non-renewable, but it is carbon-free, which makes Illinois a wonderful green state.

“If it is not nuclear, they can rely on batteries,” he said. “But the battery technologies are not at a stage where you can store a huge amount of electricity that you can supply the entire state.”

The University in its turn has always been a big proponent of renewable energy. Uddin said this bill will be in line with what the University already has a policy on, which pushes toward carbon-free.

“But the challenge is not how much electricity we can produce with solar and wind, but the time when there is no wind and sun,” Uddin said. “The University will need something to back it up.”

The future plans of making Illinois the next energy leader, is first by getting the legislation, Uddin said.

“Once the legislation is there, (the University) expects that 25 or 50 percent of electricity in Illinois will come from renewable sources,” Uddin said.

The University is important for Illinois to become a leader in renewable energy. There are other states such as Minnesota, Iowa and Wisconsin that have higher percentage of energy coming from the wind.

Uddin said cutting back on non-renewable energy is understandable; however, he does not agree on whether nuclear energy should be cut back.

“If you take out the coal and nuclear, you become very vulnerable in terms of electricity resiliency, meaning it will come a time that Illinois will have to import electricity from neighboring states and that will be very expensive,” he said.

The University is not entirely green either, only a small fraction of electricity comes from solar. Uddin insists it will be hard for the University to go 100 percent green as it will be challenging when the wind is not blowing.

“Maybe you can stay 70 percent of the time green and the rest of the time, you might need to buy electricity from someone else,” he said. “That can be done by 2050.”

At this point, it is impossible for the whole state of Illinois to completely be green.

“It is a matter of development of technology for energy storage,” he said. “I don’t see by 2050 providing batteries electricity for the entire state. We have to be realistic when setting our goals and we should keep nuclear in the next one because it is carbon-free and some people even claim that it is renewable.”