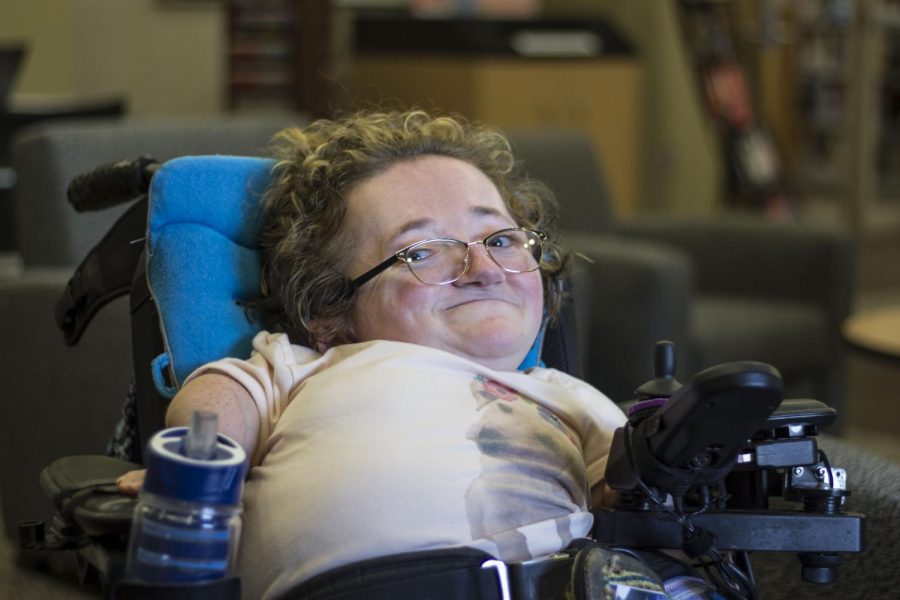 Lauren Bryant, senior in LAS, talks about her disability at the Ikenberry Library and how the University can improve on its accommodations. The University Library announced their plans to renovate the Main Library, which is estimated to cost about $54 million.

When the Main Library’s first floor bathrooms were under construction in 2015, Applied Health Sciences Librarian JJ Pionke was compelled to do a walk-through of the library map in search for accessible bathrooms in the building.

“Here I am as a person of size — without being in a wheelchair, without using a cane — and I’m having problems finding a bathroom in this building,” Pionke said he thought at the time. “What would this be like for someone in a wheelchair or someone who’s using a walker?”

Since then, Pionke brought up the Main Library’s accessibility issues to the now-former Assistant Dean of Libraries for Facilities Jeffrey Schrader. Many of these issues were resolved over the past four years, including installing a handrail to the interior ramp near the Interlibrary Loan services, rebuilding the west-entry ramp to Library 66 and adding more signs.

Renovations began a few weeks ago with the moving of the library’s information desk from the second floor to the first floor, according to Greg Knott, University Library’s assistant dean for business and human resources.

The Main Library’s renovation plan, which also entails renovating the main reading room and replacing the oldest part of the Main Stacks, is projected to be completed by 2024.

The Undergraduate Library is also working on building a new accessible sound booth located in the Media Commons, according to Craig Grant, associate director of Campus Code Compliance and Fire Safety. Construction started in the summer and is expected to be completed soon.

Lauren Bryant, senior in LAS, has a condition called osteogenesis imperfecta, a genetic disorder that causes her bones to fracture easily. She has used a power wheelchair since she was six years old.

Bryant said she sometimes goes to the UGL but faces issues with the elevators.

“The elevators are ancient and really small,” Byrant said. “You could fit one power chair and maybe one person into those elevators. The building itself is pretty nice accessibility-wise; they have automatic door buttons.”

Bryant said in cases where she can’t access resources, she will ask for help from a librarian or student.

“Everybody has always been super nice about it; they have been more than willing to help,” she said. “It’s more about me getting over that ‘Oh, I’m being annoying if I ask someone to help me.’ Even though no one has ever given any indication like that.”

The Americans with Disabilities Act, passed in 1990, prohibits discrimination against individuals with disabilities in all areas of public life, including all places that are open to the general public.

Pionke said even though the Main Library is ADA compliant, newer-constructed buildings are always more accessible.

“(Grainger Engineering Library) is much more accessible because when it was constructed, they took into account not just the minimum requirements of ADA but what else they could do to make their building more accessible,” he said.

Great Value Colleges recently ranked the University as 22nd on its list for the top 50 colleges for students with disabilities. The University was one of the first in the nation to provide a support service program for students with disabilities with the founding of the Division of Rehabilitation Education Services ( now Disability Resources and Educational Services) in 1948.

For students with disabilities, Bryant says her biggest advice is to plan ahead, because the accessible entrance for some buildings may be far from the main entrance.

She said she uses Google Maps, where it will indicate accessible entrances for some buildings. She also uses the ADA accessibility maps on the University’s website, which provide detailed descriptions of accessible features of every University building.

Pionke, who has PTSD, also considers accessibility in terms of how easily someone with social anxiety can navigate a building. He said it’s important to have compassion, take a moment and notice your surroundings and the people in them.

“If you see someone struggling, just reaching out, making that human connection, I think is really important,” Pionke said. “Just being aware that not everyone is experiencing the world like you are.”