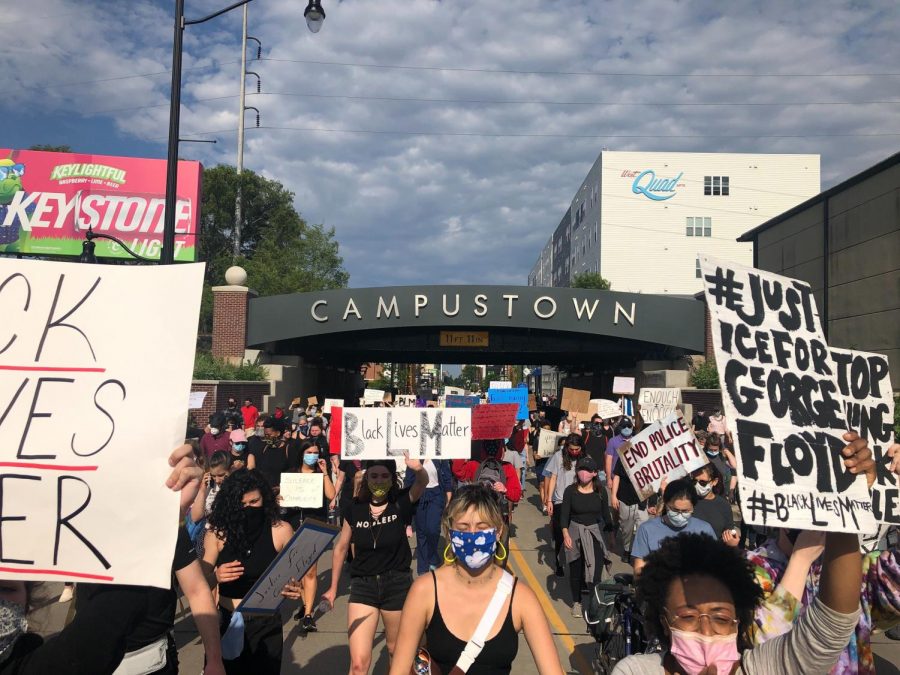 Protesters march down Green St. in Champaign, IL on Monday following the death of George Floyd in Minneapolis, Minnesota on May 25.

Protesters met at the Champaign County Courthouse around 3 p.m. Monday to participate in a peaceful protest throughout the Champaign-Urbana community.

Leaders of the protest gave a few speeches before the protesters began to march north down Broadway Avenue around 3:05 p.m. chanting “No justice, no peace.”

As they continued, the protesters unblocked Cunningham Avenue and Vine Street to allow a car to get to Carle Hospital.

After allowing the vehicle through, protesters crowded the intersection once more to take a knee in silence for George Floyd, a 46-year-old black man from Minneapolis, MN, whose death while in custody has sparked global outrage. Following their moment of silence, they started chanting again. This time, their words echoed “Stand tall for my brothers and sisters.”

The original autopsy of Floyd, conducted by the Hennepin County Medical Examiner, stated his body “revealed no physical findings that support a diagnosis of traumatic asphyxia or strangulation,” according to The New York Times.

However, on Monday afternoon, a private autopsy ordered by Floyd’s family found that Floyd’s death was caused by pressure on his back as well as the knee on his neck, The New York Times reported. The private autopsy ruled his manner of death a homicide by mechanical asphyxia.

The Hennepin County Medical Examiner then released its own findings ruling the death a homicide, declaring the primary cause of death was the way Floyd was subdued at the scene. This was in agreement with the private autopsy done by Floyd’s family.

The protest headed by the Champaign-Urbana Black Lives Matter organization ended at the Urbana Police Station, 400 South Vine St., at around 3:50 p.m. Several people gave more speeches, including calls for the four officers involved in the death of Floyd to be brought to justice. The CUBLM organization told everyone to disperse and made it clear they are not involved in anything after this protest.

Continuing into Champaign, the protesters stopped a few more times to chant. The protest ended around 5:45 p.m. at the Champaign Police station, 82 East University Avenue. The student leaders told the protesters to disperse once again, and to stay out of the streets.

Following the end of the student-led protest, many protesters dispersed, while other groups continued to march through the street back to Urbana.

Throughout the day, the protests were kept entirely peaceful. At one point it seemed that a confrontation between two officers parked in their squad car and a group of protesters might occur, but it was quickly diffused by other protesters.

Most of the police present kept a large distance between themselves and the protesters. Their main involvement was to keep cars out of the way of the demonstration.