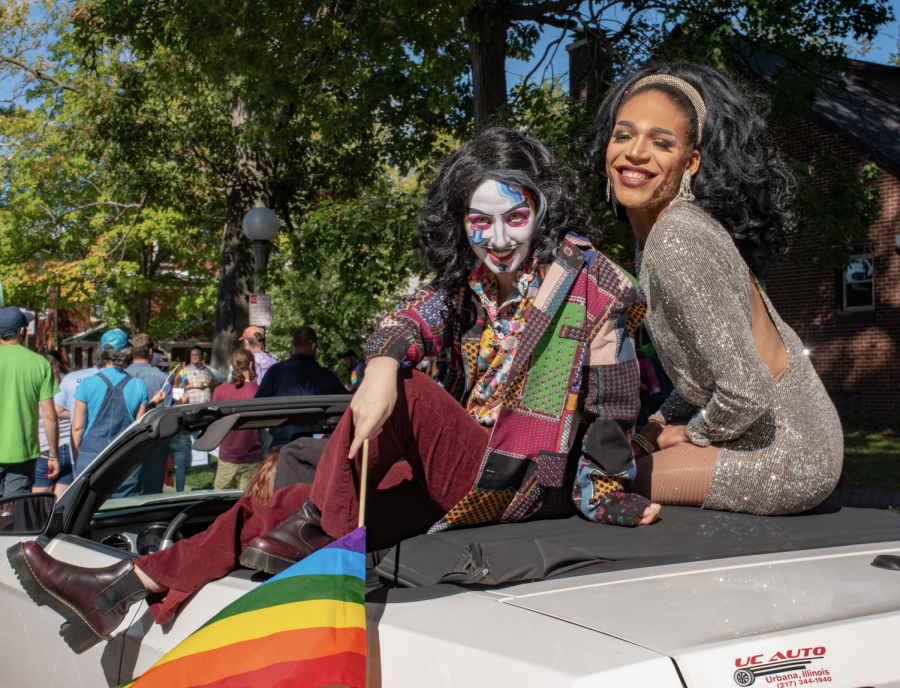 Two drag queens ride atop a white convertible during the CU Pride Parade on Saturday. The community rallied together in support of pride while honoring AIDS history.

Attendees in rainbow attire celebrated Saturday’s Champaign-Urbana Pride Fest Parade, which also honored the 40th anniversary of the 1980s AIDS crisis and centered around the theme of health throughout the COVID-19 pandemic.

“Health is really important right now,” said Alyssa Black,  Urbana resident and parade attendee. “It’s a great time to focus on health in every way, not just what’s going on right now but what’s gone on in history.”

Pride Fest was organized by Uniting Pride, a local LGBTQ+ organization, and began on Sept. 20 with events throughout the week such as a drag picnic, a carnival and family activities around C-U. Some events, such as educational workshops, were held online.

This year’s theme was “What the Health? Thriving, Surviving, Thriving” and Frydman said it was important to highlight both the pandemic and bring attention to the AIDS epidemic.

This year marks the 40th anniversary of the first headlines and diagnoses of the first cases of HIV and AIDS in the U.S., which made the process to pick the theme for this year very easy, Frydman said.

“(AIDS) is not gone,” Frydman said, “It’s not done. We’re still working with developments medically and it is still an important thing in our society.”

Events like these can change hearts and minds, which changes policy that can help those struggling with the disease whether they’re in the LGBTQ+ community or not, she said.

“You can not just fight to survive, but you can thrive,” Frydman said. “And you know, there’s a community here ready to support you.”

Champaign resident Marci Adelston-Schafer is a retired nurse and said she remembers what it was like to treat AIDS patients in the ‘80s and ‘90s.

“When it first started and they didn’t have medications, people died,” she said. “I’m a strong ally of the LGBTQ community and in the 1980’s, that wasn’t always the case for other people.”

Adelston-Schafer attended the parade to show support for the community and be there for her niece, who identifies as non-binary.

Champaign resident Andrea Beyke marched in the parade with her wife and child. Bekye and her wife Sarah were the first LGBTQ+ couple to be married at the Chapel of St. John the Divine in Champaign.

“I think there’s a lot of trauma in regards to churches and LGBTQ+ persons and so to be part of something that shows you can be both gay and part of a church, and be cheered at, and loved … I’m just feeling very warm and fuzzy right now,” Beyke said.

Beyke grew up in a rural town, often hearing about how AIDS was “the thing God uses to wipe out the gay population,” she said.

There’s still a long way to go as far as accessbility to medication in the gay community, Beyke said, but there’s also been strides.

“Even 40 years later, I’m glad it’s something we can theme a parade around now,” she said.

“AIDS was very scary back then, still is scary today, but the nice thing is that there’s medications,” Bennert said. “There’s also people out there so that you’re not living with it on your own.”

Some University students said it’s not just about awareness but also about changing history and sex education in schools.

Tessa Sussman, sophomore in Engineering, said they were never taught the history of AIDS in schools, which upsets them.

“It’s very much so ‘othering’ of LGBTQ people,” Sussman said. “A lot of history classes try to teach about other groups, but we’re a minority that’s largely left out of history education.”

Dan Purcell, freshman in Engineering, believes he’s lucky that he knows these things about LGBTQ history and health education because “there’s so many people out there that don’t, which is terrifying,” he said.

“Me sitting here with my (bisexual) flag hanging on my body right now, I’m one of the lucky ones that gets to express this,” Purcell said.

Diganta Roy, sophomore in Engineering, said it’s important to recognize the history of LGBTQ discrimination. Roy said they have heard stories from older gay men that make them grateful that things are better now.

“We’re all so young, we don’t have the perspective on what things were like and I’m glad things are better,” they said.

Roy said this gives them hope for the future of the LGBTQ community.

“I can only be hopeful that things will keep getting better for everyone who comes after us and that kids get to be happy,” they said.