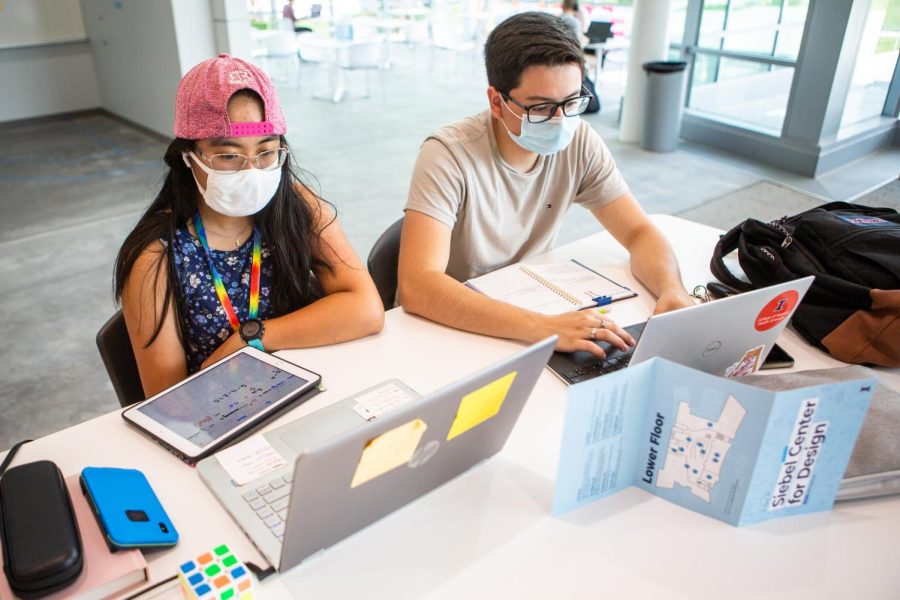 Otniel Fernandez, sophomore in Applied Health Sciences, and Nguyen Ha, sophomore in ACES, work on their laptops at the new Siebel Center for Design on Aug. 27. The University released a Massmail informing students of a new policy restricting educational technology access based on student testing noncompliance.

On Wednesday morning, the University released a Massmail informing students of a new policy restricting educational technology access based on student testing noncompliance.

The Massmail states that students who are required to test may lose access to University resources such as Canvas, Compass, Moodle and Illinois Media Space among other utilities if they fail to test according to the required schedule.

Access to these resources, some of which are necessary for students to complete their classes, will be restored once the student takes another COVID-19 test, although the Massmail notes that there may be a delay in restoring access.

University efforts to encourage vaccination or testing began with the University’s requirement that all eligible students be vaccinated by the start of the semester. The policy so far has been enforced through building access, requiring students to show either proof of vaccination or proof of a recent negative test result through their Safer Illinois app in order to attend in-person classes.

“It’s really not the worst thing they could do to somebody,” Sutherland said. “Somebody taking away technology is not the same as affecting your life forever. The people who are upset definitely don’t need to be on a college campus or around anybody, frankly.”

Patrice Clark, junior in LAS who is unvaccinated but tests regularly, felt differently.

“I think it’s kind of messed up to be honest,” Clark said. “I understand if people don’t want to get vaccinated, they should have that right, and as a University, there are some rules you have to follow. But it’s still not right to take away someone’s education that they’re paying for.”

Similar online restrictions were enforced at the start of last spring semester, described by University officials as as way to “nudge” students into testing compliant.

The Massmail states that while technology services would restore access to students who resumed their regular testing schedule by immediately taking a COVID-19 test, it may take up to four hours for access to resume, owing to the need to process tests through the Safer Illinois app.

While the Massmail focused primarily on the technology restrictions which would be imposed on students out of compliance with testing, it also noted that students may also be referred to the Office of Student Conflict resolution for formal disciplinary action.