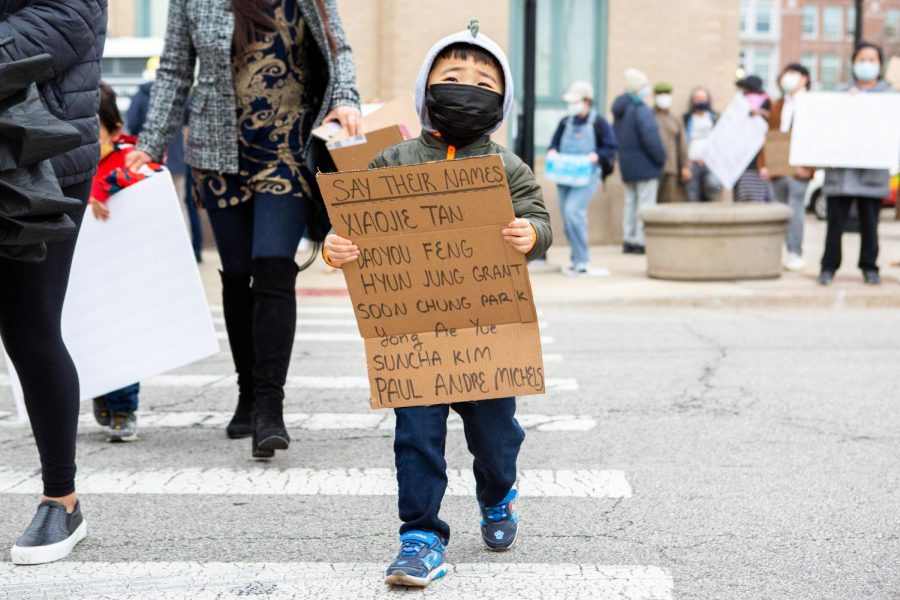 A little boy walks across North Walnut Street at the #StopAsianHate rally on Tuesday. The Champaign-Urbana community recently gathered in downtown Champaign to protest against the increase in hate crimes against Asians.

Angered by the recent rise in Asian violence across the country, the Champaign-Urbana community gathered in downtown Champaign last Tuesday to rally against racism and hate.
Dozens of people — ranging from families and children, to students and individuals — showed up to express support for the Asian American Pacific Islander, or AAPI, community.
People met on the corner of Walnut Street and University Avenue holding posters and chanting “No hate, no fear, everyone is welcome here,” while passing cars occasionally honked in support.
“I think things like this, rallies, are an important gesture in the fabric of our country to show our displeasure to utilize our right to petition,” said Aaron Chun, Champaign resident and high school psychologist.
The rally was organized by the Champaign-Urbana chapter of Showing Up for Racial Justice, an organization dedicated to raising awareness of social issues to the local community.
Emily Chen, senior in LAS, said she attended the rally because it’s important to do more than post about these issues on social media.
She said the shootings in Atlanta, Georgia. that left eight people dead, including six Asian women, left her feeling very emotional, but not completely shocked.
The nationwide and community support she’s seen since then is welcome, Chen said, but there needs to be more, especially when it comes to understanding AAPI history.
“There really isn’t going to be any change in America unless something extreme happens,” Chen said. “It’s really important to learn about the history beyond just the past couple of years, or COVID, or whatever the past president has said.”

Ham Gadel, 20 year-old Savoy resident, had similar thoughts. Gadel said it’s great to see this support but wonders where it was in the past.
“We’ve been facing these kinds of issues for years and years, but it seems like it’s just never been talked about on a national scale until now,” Gadel said.
Gadel said this issue particularly affects them as someone in the AAPI community and that they have general fear these days because of the rise in hate crimes.
“It’s just that uncertainty that’s very scary,” Gadel said. “Every time someone is unnecessarily rude or just treats me different from my white colleagues, it makes you stop and think ‘Oh, did they have a problem with me as an Asian person?’”
Chun said recent violence makes him think about the murder of Yingying Zhang, a Chinese scholar visiting the University in 2017.
“I can’t help but think that her race and how Asian women are portrayed in our society, I can’t help but think that was a factor in why this man killed her and why he chose her specifically,” Chun said, referring to stereotypes of Asian women as passive targets.
Yaguang Lian, research engineer at the University and president of Chinese American Association of Central Illinois, said there hasn’t been much Asian-targeted violence in the C-U community.
But Lian said he has still heard of stories about verbal attacks in grocery stores.
Ashley Cho, counselor at Urbana High School, said recent violence has awakened in herself and other second generation Asian Americans that microaggressions, insults and racism aren’t something they should stay quiet about anymore.
“I wished there were more things like this or more conversations like this when I was younger,” Cho said. “I’m doing this to show up for my students and my younger self.”
Cho said she hopes these types of events will help people in the AAPI community feel more comfortable in sharing their experiences with racism.
Abby Schrantz, SURJ manager, said they like to organize these street corner events because “they can’t ignore us.”
“Our whole point is then all the cars driving by, the people walking by, they can stop and really reflect on everything going on right now and what they can do about the situation to amplify all the underrepresented voices,” Schrantz said.
Jie Woo, pastor from Sidell, said she feels warm seeing all the support at events like these and that there is work to be done within the AAPI community as well.
Woo said there are words in the Chinese language that refer to other people of color in a negative way and most are unaware, so educating people about stereotypes in her own community is important.
“I think more understanding and communication needs to be in place, the different races need to have some events to understand each other,” Woo said.
Above all, the rally attendees hope that this support continues on beyond the next couple of weeks.
“Racism is something we talk about, racism is something we say is wrong and we make resolutions about it, but it really is time to put our money where our mouth is,” Chun said.