Students weigh in on electoral college 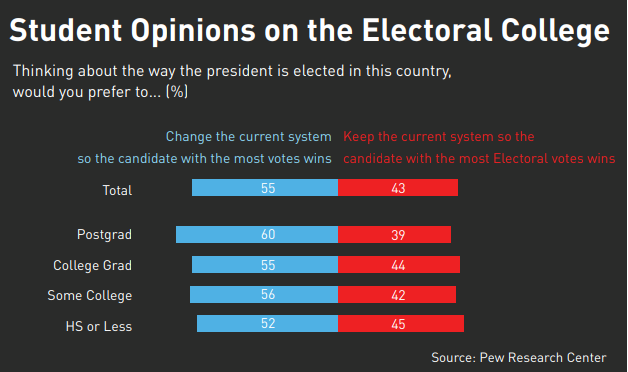 The Electoral College is an American institution for voting in which all of the electoral votes from a state are awarded to one candidate running for president based on who the electors choose to vote for. Each state has a different amount of electoral votes, not necessarily based on current population density. When a citizen votes for an electorate, they are choosing someone to represent their viewpoints in a presidential race, rather than voting directly for a presidential candidate.

While many in the U.S. think the Electoral College is a fair representation of citizens, many others view it as an outdated system. Those who believe it’s outdated prefer the idea of a national popular voting system in which a presidential candidate must win by majority vote of all U.S. citizens, rather than by electors in key swing states.

Student opinion on the topic of the national popular vote has become a divisive issue, with students at Illinois representing a wide range of positions.

Dat Luu, sophomore in LAS, is the Illinois chapter president for the Young Democratic Socialists of America. He views the Electoral College as an outdated establishment, and proposes that in an ideal world, the national popular vote would be the voting system. Since becoming interested in politics at a young age, he felt compelled to see change from outdated institutions. He currently represents a key demographic of students who align with a more leftist ideology.

“The founding fathers, at least in hindsight, didn’t understand that in several hundred years there was going to be a country of 320 million people and the economy is totally different,” Luu said. “So, they implemented (the Electoral College) without understanding that conditions have changed now to the point where this is doing more detriment to our society.”

Luu displays a key opinion of students favoring the national popular vote; the Electoral College is seen as outdated and not a fair depiction of current society and voting patterns. This argument has led to attempted amendments. For instance, in the 1970s after a close presidential race, the House of Representatives passed a bill to eradicate the Electoral College. However, the bill was struck down in the Senate.

A more recent proposal is the National Popular Vote Interstate Compact (NPVIC). This is the most recent proposal for abolishing the Electoral College, as it allows the candidate who wins the national popular vote to be awarded the state’s electoral votes, once enough states join the agreement. The NPVIC has been enacted into law by 15 states and D.C., totaling 196 electoral votes. It needs an additional 74 electoral votes to achieve its intended effect.

This agreement has a tumultuous history from its proposal in 2008 and still 13 years later, it has not been ratified. Professor Brian Gaines and former professor Jillian Evans of political science in LAS have researched this specific topic and written multiple peer-reviewed journal articles about the topic.

In one titled “The Myth of the Bipartisan National Popular Vote Plan,” Evans and Gaines write that “looking ahead, it seems unlikely that the NPVIC can take effect without a large surge in the number of states with governments controlled by Democrats (either by the trifecta of unified government or by having veto-proof majorities in legislative chambers).”

A number of students said they found it difficult to find advocacy efforts that would be beneficial to represent their ideas. Multiple students, even if they were strong in their opinions, found ways to find middle ground because they were desperate to change the current system.

Cesar Monsalud, junior in Engineering, said he does not have a strong opinion on the Electoral College. He found the topic did not come into conversation except during election years, though he does understand the basic functions of how it works. Monsalud said he felt there was still hope to amend the Electoral College rather than abolish it because the core idea of electors voting on behalf of others was a logical idea for U.S. citizens’ benefit.

“We have these elected positions so we don’t have everyone vote on everything,” Monsalud said. “We have to vote for president, vice president, governors, but it seems unreasonable to have everyone know everything about each topic. It seems reasonable for everyone to know who they can rely on and that way they can vote for them and they can take care of them in their best interest.”

Adrian Dela Cruz, freshman in Business, is frustrated with slow bureaucratic government institutions. He feels as though Congress is too slow to pass bills, especially when they are so divisive. Despite the frustration, he can still idealize a middle-ground position.

“I don’t think America is ready for the big change yet, unfortunately,” Dela Cruz said. “I feel like the easiest way was to make sure that for electors, all the votes are equal because that would result in abolishing the Electoral College. Just keeping the system but modifying it to modern standards.”

On the other hand, if gerrymandering was not a consideration, some believe the way in which Maine and Nebraska split up Electoral College votes per district would potentially create a better system than the “winner takes all” system of today.

Gerrymandering is a political strategy where congressional districts are split up to favor certain political sides over the other. This way, a certain candidate or political party has a better chance of winning because the districts are drawn up in a way that includes many of their constituents.

Tyler Swanson, sophomore in LAS, is president of Illini Democrats. As an extremely politically active student, Swanson has also been involved in student government. He has a more centrist ideology, but still favors the abolishment of the Electoral College.

“I think voting by congressional district makes sense in the way that it kind of breaks down votes in states which is good in the case of Nebraska it allows Democrats to get about there and same thing in may in Maine it allows both Democrats and Republicans to split votes,” Swanson said. “But then you also gotta keep in mind that a lot of congressional districts are gerrymandered to an extreme extent.”

Both sides seem to have potential compromise solutions, as evident by students of a certain opinion still willing to address the concerns of the other side. Framing the issue in certain ways can relate a lot to why some people believe their opinion. For example, people say the National Popular Vote would be anti-Democratic because it would favor large states while others say the Electoral College is anti-Democratic because it favors swing states.

Big takeaways from this issue of framing can be that those around you tend to influence opinions, so hearing all potential solutions without the divisive labels like Democrat or Republican can lead to supporting a cause for what it is, rather than what others have to say about it.

The Electoral College remains a very polarizing issue throughout the US, as roughly half of the country can be expected to vote for or against it based on the label of Democrat or Republican. According to the Pew Research Center’s Electoral College poll, 71% of Democrats favor a popular vote system compared to 37% of Republicans.

No one interviewed for this topic is a self-identified Republican and no one from Illini Republicans responded to The Daily Illini’s request for comment.

Trying to find people who are opposed to the Electoral College remains to be difficult on a college campus, 59.71% of Champaign County residents voted for Biden in the 2020 election, but looking into the wider population, more diverse opinions can be identified. In a PEW research poll conducted in January of 2020, 55% say the system should be changed so that the winner of the popular vote nationwide wins the presidency, while 43% favor keeping the Electoral College system, according to the Pew Research Center.

Ananya Rajagopal, freshman in Engineering, echoed the sentiments of Luu and Dela Cruz supporting the popular vote. Though, despite wanting to see a change in the overall system, she contends the solution she would like to see might not be the one the U.S. gets.

“I think when candidates from a particular party have won the popular vote seven out of eight times but candidates from that party have not been elected seven out of eight times, that kind of says something about the system and how things need to change,” Rajagopal said. “But, I do think that allowing electoral votes to be split like that is a good start in the right direction.”