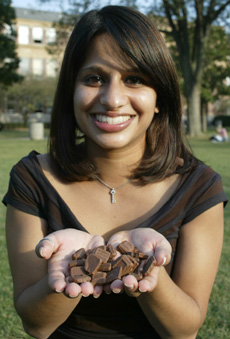 Just mix sleep deprivation and hunger with an accounting final in the morning, add a pinch of deliriousness and – voila – this creates Anjali Jariwala’s perfect recipe for the Chocolate Illini.

Jariwala, a senior in business, established the Chocolate Illini at the end of last semester with the mission of spreading her love and obsession of eating chocolate.

“I was so tired, and I got off topic,” Jariwala said. “I love chocolate more than anything,and after talking to friends, I thought it would be funny. There was no other organization like it.”

Jariwala said the joke became a reality when space for a booth on Quad Day opened up this year. Three hundred people signed the e-mail list and 40 showed up for the club’s first meeting.

“There was such a good feedback. I was so excited to see other people who loved chocolate as much as I did, ” Jariwala said. “Some people said it was the best club they had signed up for all of Quad Day and that really made my day.”

Jariwala’s contagious excitement spread to her younger sister Monica Jariwala, a freshman in LAS and fundraiser committee chair for the club.

“There were so many clubs on Quad Day with the same focus,” Monica said. “There was nothing else like this, and I love chocolate.”

Despite the club’s light-heartedness, Anjali said she wants members to take it seriously. She designed an executive board with fundraising, social and volunteer committees.

“I wanted people to feel involved with the planning and such so that they had a role within the organization,” Anjali said.

Payal Tailor, senior in business and the club’s secretary, said that although the organization has hit the ground running, members have brainstormed a fundraiser for Sweetest Day on Oct. 14.

“We’re hoping to sell baked goods like cookies and brownies and we might sell chocolate covered pretzels,” Tailor said. “We’re kind of going for something where people can buy their sweethearts sweets.”

Members have brainstormed other ideas that include a chocolate-themed movie night, during which members will watch Willy Wonka and the Chocolate Factory. An international chocolate fair has also been planned so members can sample chocolates from around the world. A potluck, where everyone will bring in a chocolate dish, is also scheduled. Members plan to visit sick children in the hospital and deliver bags of chocolate.

Both sisters agreed that dark chocolate is their favorite, but neither could completely explain why.

“I don’t know why it’s so good,” Anjali said. “Chocolate just makes me happy. Whenever I eat it, it totally changes my mood. Chocolate solves my problems.”

“There’s a type of chocolate for every person,” Monica said. “You have to splurge once in a while. Why not have fun with it?”

Monica also complimented her sister on going through with the club.

“Anjali was the perfect person to create this,” Jariwala said. “She has her heart and soul in chocolate and whenever she has her heart in something, she will follow through with it and dedicate any amount of time to it.”