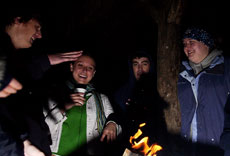 “You can’t selectively love days of October,” said Matt Modes, junior in LAS. “You can’t pick and choose if it’s rain or shine or sleet.”

Zachary Herrmann, junior in LAS, stopped fiddling with the fire to roast a s’more and agree with Modes. Herrmann is president of October Lovers, a registered student organization that provides students with the opportunity to relive childhood memories of exploring apple orchards, pumpkin patches and corn mazes. Modes serves as a club board member.

Considering the weather, Herrmann said he was pleased with the turnout.

“We’re not troopers, our members are,” Herrmann said. “They’re still coming out and we’re providing them the opportunity to do so.

Herrmann thought up the October Lovers club as a freshman while walking back to Allen Hall after a soccer game. He passed the cemetery on Florida Avenue and said he got that nostalgic, spooky October feeling, reminiscent of the times his father took him trick-or-treating.

“We would always do things as a whole family, but this gave us an opportunity to spend time doing something special and exciting,” Herrmann said.

He said October weather is perfect for outdoor activities.

“There’s nothing like running through a forest preserve when the leaves are falling down,” Herrmann said. “After a summer of heat and humidity, it’s refreshing to have that cool, crisp air and it’s so pretty this time of year.”

Melissa Paraf, club treasurer and junior in LAS, joined the club two years ago. She said she has always had a soft spot for October because it is her birthday month.

“There’s so much you can do – I liked playing in the leaves,” she said. “As a kid, it was a great way to make a mess and not get in trouble because you were outside.”

Three hundred people make up the club’s e-mail list, 30 to 50 of which consistently turn out at events, Paraf said.

The number surprised Herrmann at first, but once he thought about it, he said, it made sense.

“Everyone who has some idea of what fun is loves doing these types of things,” Herrmann said. “Why wouldn’t there be a club like this?”

Events this month included visits to the Curtis Apple Orchard in Champaign and Hardy’s Reindeer Ranch in Rantoul, where members wandered through 10 acres of nine-foot-tall corn, in a maze designed like a dragon.

“It was really fun, but scary,” said Amanda Brenner, freshman in LAS. “We had to find checkpoints and we kept getting lost. It was dark, we couldn’t see and people would jump out at you.”

Future activities for club members include camping and pumpkin picking.

“October brings a piece of my childhood back,” Herrmann said. “Every month of the year has something to offer – but when it comes to fun-filled activities, October takes the pumpkin pie.”