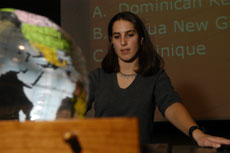 Carmen Tedesco, graduate student and organizer of the event, addressed the enthusiastic crowd of students.

“For those of you who have never been to Globe-O-Mania, you will never experience anything as wonderfully geographic as this,” Tedesco said.

More than 250 students participated in the event, which was held in celebration of Geography Awareness Week. The competition consisted of three rounds, with questions getting progressively more difficult. After each round, one-third of the teams were eliminated based on the number of questions answered incorrectly.

The teams, consisting of four to five people each, were given a minute to answer each multiple-choice question. Answers were submitted by pushing the A, B, C or D buttons on an “I-clicker,” a hand-held, computerized device which registered each team’s answer instantly through a matched team ID number.

Topics included everything from the geographical location of remote areas to languages spoken in foreign countries.

“We want to get people thinking about having fun with geography,” Whiting said.

Door prizes were given out throughout the night, including T-shirts, gift cards and inflatable globes. The winning team, “Kings of the Nordic Twilight,” won a copy of the newest edition of the Oxford World Atlas.

A picture of the winning team will also be displayed in the geography department for a year.

The GGSA, the Department of Geography, the Geography Club and geography honors society Gamma Theta Upsilon coordinated the event.

Meghan Thome, freshman in LAS, participated in Globe-O-Mania to earn extra credit for her geography class.

“I think it’s pretty cool,” Thorne said. “I like the game show idea with the clickers.”

Shannon Geegan, senior in LAS, said her team was more focused on having fun instead of winning.

“It sounded like a fun, challenging event,” Geegan said. “Being seniors, we wanted to participate in more things and this sounded like something.”